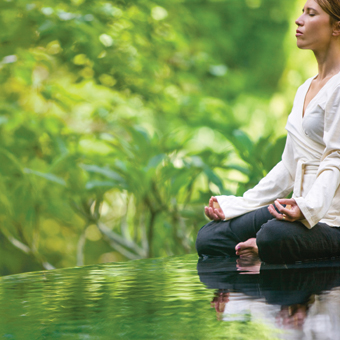 Catholics can take a lesson from the Hindu tradition of yoga when it comes to praying with body, mind, and spirit.

Walking into the dark chapel, gothic arches soaring overhead and didactic glass staining the pews with jewel-toned light, I tried to calm my mind. Papers, classes, work, broken relationships, my future. The thoughts sparked in rapid succession, a finale-on-the-Fourth-of-July-show in my mind. I dropped a knee to the cold floor, blessed myself, and slumped into the nearest pew.

Slouched against the pew’s hard back, I tried to quiet the thoughts stumbling over themselves. Ineffective, I finally sunk to the floor, struggling to disregard the slush and sand that seeped into my pants. The hardwood brought my attention all too readily to my knees. My back ached from the weight of my pack, my neck tightened around a crick, and every muscle complained from the laps I had done in the pool the day before.

But never mind. I drew my attention past the aches and pains, past the unyielding floor beneath my knees, past the cold wetness of my jeans. Unfurling my hands in front of me, I finally raised my eyes to the only lit object in the room: a gold-plated tabernacle brilliant with the reflection of a single spotlight. A candle flickered behind red glass in the corner.

That ritual in the dark campus chapel defined my years as an undergraduate. It was not that I was overly prayerful-more like chaotic to the point of self-detriment. Only in those moments passed in that cold, beautiful room could I find a peace that would draw me beyond my concerns. I could rarely initiate those blissful silences myself. Too many frustrations, anxieties, responsibilities plagued my mind. Over the years, though, I found an unexpected weapon in my arsenal against all of the daily stresses that obliterated peace. It was through the discomfort of kneeling, the humiliating and unappealing process of lowering myself to a dirty floor, that my mind could wrap itself around what I was doing. My prayer was made possible through my posture.

The notion that my body’s position impacted my prayer was nothing new. It all began nearly a decade earlier with the inspiration of a very rotund Franciscan friar. Shuffling back and forth in front of our youth group, Brother John gave us a challenge. “Next time you’re praying, I want each of you to try it with your hands clasped in your laps.” He showed us what he meant, his knuckles white with intention. “Then, try praying with your hands open, face up, on your knees.” He added to his list: hands placed over one’s heart, arms crossed over the chest, and limbs waving in the air. “Pay attention,” he instructed, his voice boiling up from deep within his frame, “to what your mind does each time. Do you find it easier to focus? Harder? Which works best for you?”

Taste-testing those postures alone in my room, I remember marveling at how drastically they affected my prayer. With my arms crossed in front of me, I couldn’t talk to God with any kind of authenticity. When I crossed them behind my back, suddenly I was open and honest. With each position, my prayer looked very different.

Providentially, it was at that time in my life that I began to practice yoga at the local gym. The appeal of yoga lay in the benefits to my posture and the definition added to my abs and arms. Considerations of the real meaning of the spiritual exercise never crossed my mind. That is, until I found myself in a Hindu theology class five years later.

As a theology major with a focus on comparative studies, much of my undergraduate career circled the lessons diverse religious traditions could teach one another. Hinduism especially entranced me. It was fascinating in its foreignness. As a devout traditional Catholic who grew up with a healthy spattering of New Age, I appreciated the newness of the lessons I learned by studying Hinduism, with its meditative self-knowledge, exotic festivals and flavors, eclectic practices. It all caught my fancy. So when I was given the opportunity to study Hinduism firsthand, I found myself on a plane faster than I could say “Bhagavad Gita.”

The yoga I encountered on that first journey to India was far removed from the yoga of flexibility and muscle tone. The yogi, a bird-like man with bushy eyebrows shadowing his coke-bottle glasses, sat before our class with his knees beneath his body and raised his arms above his head. “I want you all to inhale when you raise your arms like this.” Then he rapidly thrust his arms down-a pantomimed motion of a weight-lifter lowering his weights-exhaling a loud hrumph.

“You should exhale out your nose. I want to see snot flying,” the yogi explained, showing us the action once more to confirm for everyone exactly what he meant. I looked at my classmates, trying to stifle a laugh. What was this? This wasn’t yoga. Where was the warrior pose? Downward facing dog? Sun salutations? I inhaled and exhaled exactly as instructed, embarrassed when the requisite snot did fly.

Later, while consulting the professor who had brought me to India, I learned that the exercise we practiced was indeed yoga. “It’s a new type of yoga evolved from a very old form,” she explained with a smirk, acknowledging that my confusion was to be expected. “It’s meant to focus on the breath,” she explained. “Remember, that’s vital to yoga-the breath. You’re always supposed to focus on the breath. Be mindful of the breath.”

Mindful was exactly what I became. Never in my life had I spent more time working to breathe. My entire thought process began to center upon how to make my lungs inflate and deflate in new ways. Suddenly I was extraordinarily present; when you’re spending so much time focusing on how to breathe, you can’t help but be present to every moment.

That, it turns out, was exactly the point.

In the months following my experiences in India, I learned that the practice of yoga comes in many variants. Stemming from assorted religious books of Hinduism, the most comprehensive yogic text is the Yoga Sūtra by Patañjali. Within this text, Patañjali explains that “yoga is the cessation of mental fluctuations.” That is, it is complete control of thoughts for a singular purpose: Realizing liberation is the ultimate pursuit of Hinduism. “Which requires the greater strength,” asks Patañjali, “letting go or restraining? The calm man is not the man who is dull. . . . The calm man is the one who has control over the mind waves.”

To gain this control, Patañjali explains, one must practice assorted exercises ranging from adherence to nonviolence (ahimsā) to-yes-postures. Forming those exotic contortions with one’s body is not the goal. The goal is to be able to focus one’s mind while forming those exotic contortions. The postures of yoga are meant to lead the mind beyond the postures. They’re the method, not the goal.

As I investigated these yogic teachings, I found myself reconsidering the postures Brother John had introduced. Weren’t they methods for becoming mindful of what I was doing? Wasn’t I more receptive when I prayed with open hands? Didn’t my thanksgivings feel more fervent when I placed my hands over my heart? Intrigued, I began to pray with my entire body.

After reading Matthew’s account of the Passion, I lay on my back with my arms stretched out on either side; the struggle to breathe in that position embodied for me Christ’s time on the cross. Going into the adoration chapel, I lowered my head to the floor asking for the humility that would let me worship more fully. In Mass I knelt, bowed, genuflected-engaging every traditional bodily attitude in the hopes that I would learn something altogether new from them.

And an amazing thing happened: I couldn’t help but pray.
Just as shooting snot out of my nose with intentional breath had brought breathing to mind, so had prayer postures made me mindful of praying. Kneeling during the consecration suddenly made me consider why I knelt. Bowing my head to the floor brought to mind what I adored. Meditating on my arms outstretched rendered thoughts of how redemption came. Yoga had completely transformed my Catholicism.

Perhaps this only makes sense. As Catholics we believe that externals matter. What we do with our bodies impacts what we experience within our souls. We might not be trying to rein in unruly thoughts so as to reach liberation, but we certainly can benefit from a physical response to those things we point to as sacred. Our bodies can be used to bring our thoughts into line.

Now I don’t advocate a blind process of folding our limbs, bowing our heads, or opening our hands; postures are only as useful as our consideration of them is authentic. Each practitioner should approach a practice with a skeptical and self-critical eye. And I don’t support the syncretism of religions or New Age. Our differences make us unique for valid reasons, and to pick and choose and assimilate selectively only ever diminishes the value of every religion.

But perhaps by learning from our Hindu brothers and sisters we can rediscover an element of our tradition that is as old as the religion itself. Whether it’s leaping with joy during worship or extending our arms during a benediction, letting our bodies form our prayer can breathe a freshness into our faith. I may not be thinking of the mountain pose when I’m standing during Mass, but through my study of yoga I’ve come to rethink what I’m standing for.

M. M. Hubele is a freelance writer and editor. She is currently working on a Masters in Fine Arts for creative writing at the University of Arizona.