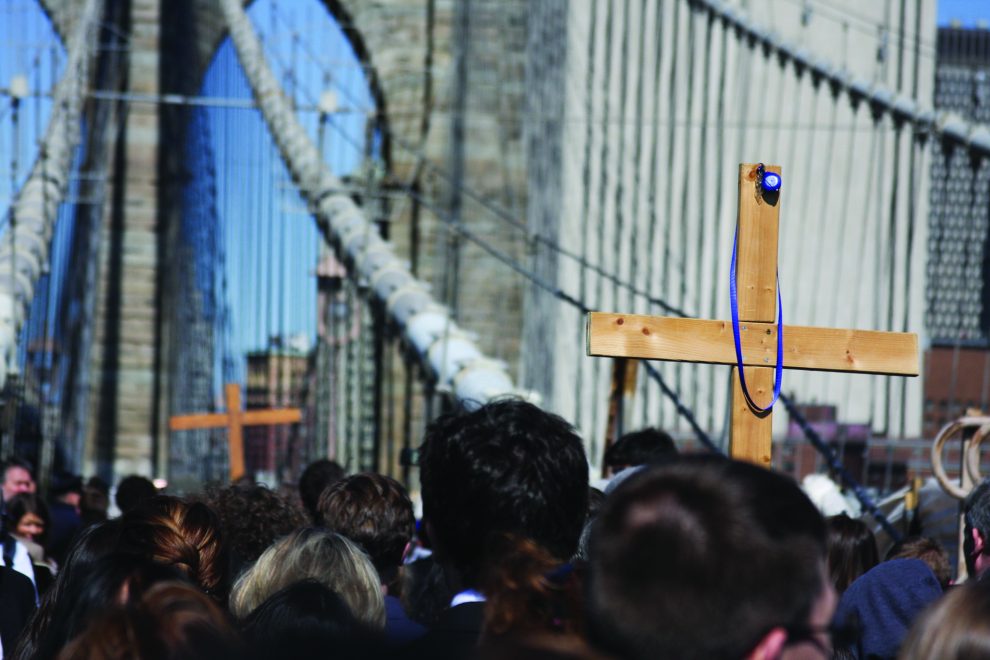 It’s almost as if Mel Gibson’s The Passion has come to life. In Chicago’s largely Hispanic Pilsen neighborhood, some 7,000 people gather at Providence of God Parish for the beginning of the Via Crucis or “Way of the Cross” every Good Friday. This is no symbolic walk through the park, however; “Pontius Pilate” is dressed in Roman garb, as are the soldiers who accompany “Jesus” the 12 blocks to Harrison Park, where he will be literally tied to a cross.

Some find the realism a bit disturbing, but it makes perfect sense to Latino Catholics, says Timothy Matovina, associate professor of theology at the University of Notre Dame. “Suffering is a reality for Latino people. Our people have suffered and we continue to suffer,” he says. “In the Latino world, the celebration of Good Friday is a radical acceptance of life as it is.”

The important part of the Via Crucis isn’t the realistic blood dripping from the real crown of thorns but rather the sense of accompaniment–with Jesus and with Mary–in the procession. “The idea is that you go be with someone in their suffering, just as you would go be with a friend or even an acquaintance who has had a death in the family,” he says.

The day continues with a service featuring the Siete Palabras or Seven Last Words, the Pésame or condolences to Mary, and finally the Santo Entierro or holy entombment.

This connection of Christ’s suffering to that of the people is extremely significant in popular Latino devotion as well as in liberation theology. “If Christ’s suffering is redemptive, then our struggles will also have a higher meaning,” Matovina explains.

This doesn’t preclude working to end suffering, nor is it dangerous for victims, he says. “In fact, while people are left to wallow in their suffering, I think to remove the symbols that provide meaning to that suffering would be spiritually detrimental,” he says.

Although some say that Hispanics could stand to put more emphasis on Easter, there’s also a danger in skipping the suffering that comes before Resurrection. “Of course, we always need to move toward the hope of the Resurrection,” Matovina says. “But, at the same time, the rest of us need to focus on the suffering of the world. That is an essential part of being a disciple.”