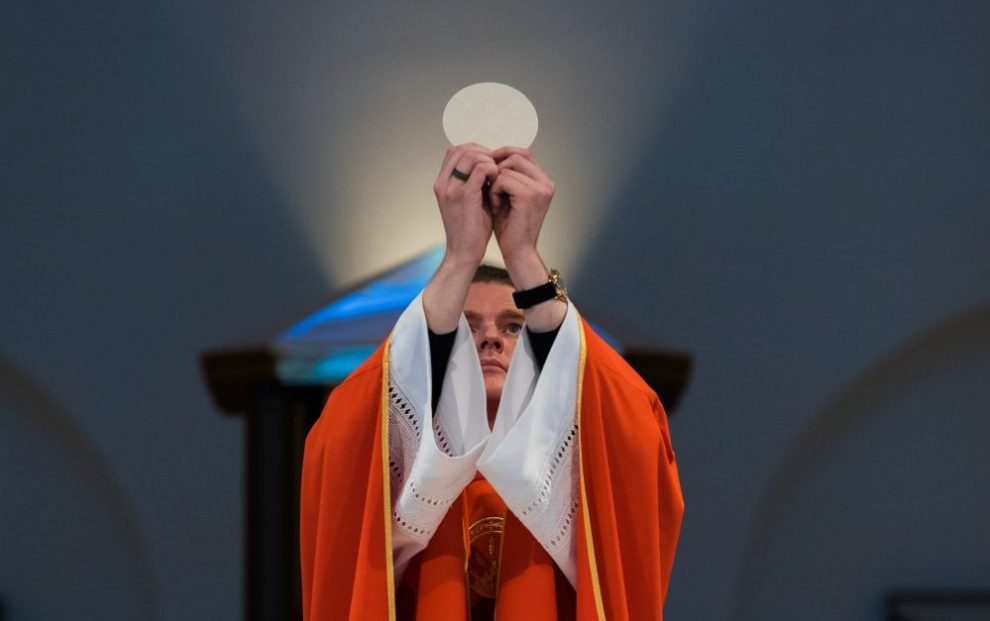 The question of exactly when the eucharistic gifts become Christ’s Body and Blood has commanded attention and debate for centuries.

From the supper at Emmaus, disciples have cherished the Eucharist as the clearest sign of the Risen Lord’s abiding presence.

Yet, beginning in the Middle Ages, for a thousand years laypeople in the West seldom received Communion, and even then only under the form of bread. For that reason knowing when Christ became present at Mass was a key to spiritual life, since the ordinary way of worship was looking at the consecrated Host raised high over the priest’s head rather than eating it. Medieval scholars-all priests-naturally looked at the Eucharistic Prayer and the cherished memory of the words and deeds of Jesus at the Last Supper, called the “Institution Narrative.” The winning answer in the debate was keyed to the words of the priest: “This is my body.” (Hoc est enim corpus meum.)

Today, the answer can be found in the Catechism, but also by observing the liturgy. The Catechism says that as soon as the Institution Narrative begins, the Lord is present in the elements of bread and wine. That is why the universal law of the church directs the assembly to kneel for this part of the Eucharistic Prayer, even though in the United States we are already kneeling at that point.

The ritual direction in the sacramentary says that after the Insitution Narrative, the “priest holds the consecrated host and shows it to the congregation.” The postures and gestures and texts of the liturgy are clear that the transformation is already complete midway through the Eucharistic Prayer.

The same question never captured the attention of the Eastern Catholic and Orthodox traditions. For them, the critical moment has always been the epiclesis, or the calling down of the Holy Spirit on the gifts of bread and wine and the assembly. The priest extends his hands over the gifts and asks the Holy Spirit to “change them for us into the Body and Blood of Christ.” For an Eastern Christian, that’s the critical moment.

There is a deeper, more personal question. At what point do we become the Body and Blood of Christ? The bread and wine is not consecrated for its own sake, after all, but for the good of the church and for the world. The question is worth thinking over. Maybe knowing the answer to “when” the bread and wine are transformed will lead to the more critical and personal question as to “why” the Lord comes to us in Holy Communion.