Between Heaven and Mirth
By James Martin, SJ (HarperOne, 2011) 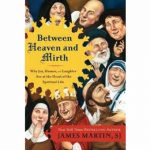 Perhaps I am not the best person to review this book. Although not completely humorless, I have been told that I am not particularly funny. And I do have a disposition that has earned me the occasional nickname “Negative Norma.”

James Martin, on the other hand, is a riot. Anyone who has attended his public presentations has left with sore cheeks from laughing so much. He’s even funnier one-on-one. What better humor credentials could a priest have than being the “official chaplain” to Comedy Central’s The Colbert Report?

So I wasn’t surprised that Martin wrote a book about joy, humor, laughter, and the spiritual life. Between Heaven and Mirth is as down-to-earth, accessible, and practical as his other books. In this book Martin argues that Christians need to shed their dour image and start seeing the chalice half-full. Despite Christianity’s current reputation as super-serious, apparently a number of authors and saints have explored the importance of the virtue of joy, and Martin succinctly collects their contributions here.

The problem is the book itself isn’t really that funny. Despite the inclusion of a number of religiously-themed jokes (many of which involve a rabbi, a Protestant minister, and a Catholic priest, usually a Jesuit), I never laughed out loud while reading this. Martin does, however, offer some serious spiritual advice about the need to focus on gratitude, to not take ourselves too seriously, and to reclaim the joy and humor in our tradition.
I was a bit annoyed by the constant asides in asterisked footnotes (in addition to academic endnotes). But what can you expect from a Negative Norma? Maybe I need this book after all.