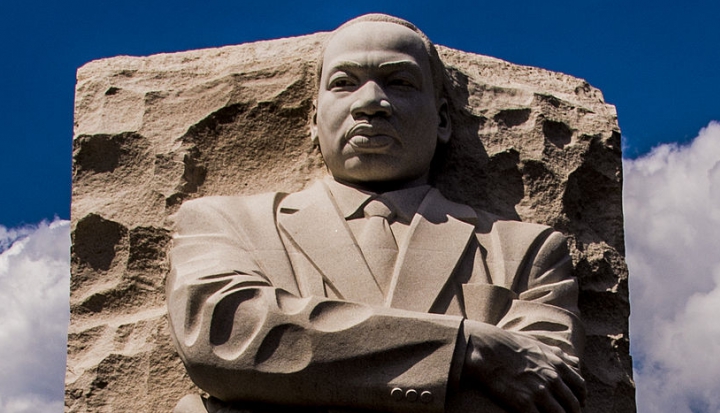 At Marquette University I teach a course on Martin Luther King’s ethics and faith. I face two obstacles when teaching about King. The first is that we are too acquainted with him.

We know that King, born on January 15, 1929 in Atlanta, led a successful bus boycott to desegregate the buses of Montgomery, Alabama in the mid-1950s. The black-and-white videos of marchers pummeled with fire hoses and protesters mauled by police dogs during his Birmingham campaign of the early 1960s are now iconic images of both the forces of injustice and the power of the human spirit.

Each year we hear the cadence of his voice intoning his signature summons, “I have a dream.” We know that he died too early, at the age of 39, murdered at the prime of his life on April 4, 1968. We know so much about him that we think there is little left for his life to teach us.

The other obstacle in teaching about King is what I call the “pedestal effect.” King is a mythic figure, so much larger than life and so heroic in stature that most of us feel we have no chance of achieving a fraction of his accomplishments. The fact that he relentlessly advocated—and constantly practiced!—nonviolent responses to insult, humiliation, and injury is something we can sincerely admire and yet conveniently dismiss. He is almost superhuman, beyond our range and reach. So we sigh longingly, waiting for God to raise up “another King” to rescue us from our worst selves as a nation.

Until recently I also admired King in a way that renders him safely irrelevant. What changed was my own experience of breaking the silence for the sake of justice.

In 2005, I gave a major address to the annual meeting of the National Catholic AIDS Network, an association of those who minister to those infected and affected by the HIV/AIDS pandemic. A curious thing happened as I told friends about the speech. “Why would you do that?” many asked. “Don’t you know what people will say?”

Then during the 2006 election season, I published a reflection on a proposed amendment to my state’s constitution that would prohibit same-sex marriages and also foreclose any legal recognition of such commitments. I argued against the measure on the grounds that it went beyond simple support for “traditional marriage” and endangered the human rights of many individuals and families.

To say that the article was noticed would be an understatement. Internet blogs denounced me as a “renegade priest” who “misleads the faithful” and “encourages immoral conduct.” Other comments were too vile and hateful to be printed here. Again many friends, out of deep concern, asked, “Why? Why did you write this? Why couldn’t you just keep quiet?”

While struggling to answer such questions and deal with such animosity, I reread an often neglected speech King delivered in 1967, in which he justified his opposition to the Vietnam War. King publicly and humbly acknowledged his hesitancy as he contemplated taking a then-unpopular stance.

I also reread his account of his prayer life, where he stated: “My great prayer is always for God to free me from the paralysis of crippling fear, because I believe that when a person lives with fears of the consequences for his personal life, he can never do anything in terms of lifting the whole of humanity and solving the social problems which we confront in every age and every generation.”

King then became for me more than a revered icon; he became a flesh-and-blood human being who also struggled with fears and anxieties. Yet his deep moral compass would not allow him to remain silent; his profound religious faith propelled him into the risky arena of speech.

Why did King feel compelled to speak out? And why did I? A line from his Vietnam speech jumped out at me: “There comes a time when silence is betrayal.” This simple sentence summed up for him—and for me—why he felt it necessary to speak on behalf of those whom he called “the Father’s suffering and helpless and outcast children.” The cost of silence is betrayal—the betrayal of one’s convictions, one’s values, one’s beliefs, one’s very self.

“Our lives begin to end the day we become silent about things that matter.” A picture of Martin Luther King Jr., with this caption, graces the wall above my computer. I look at it often for inspiration. It challenges and haunts me, as it speaks of both the risks of breaking silence and the costs of keeping silent in the face of injustice.