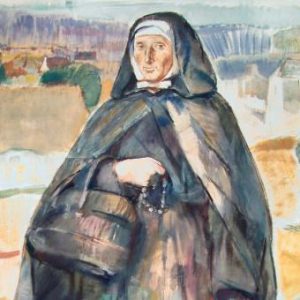 The road to sainthood is difficult, but newly canonized Jeanne Jugan knew that patience would bring otherworldly success.

In the last few years I have been a friend to an elderly man and helped care for a frail and aging relative who needed daily assistance and biweekly trips for renal dialysis treatment. When I took on these tasks, I thought, “Here’s my chance to be a saint.”
Indeed, I found joy in putting aside the pursuit of my well-being for another. But after a while I realized the sainthood thing was not what I expected it to be. The nearly infinite patience my tasks required eluded me in the long run. Trying to be a person totally for others led me to emptiness and exhaustion. You can give so much that you no longer have anything to give, and that’s where I found myself.

Then one day I came across a quote on the Internet from someone named Jeanne Jugan. “Be kind,” Jeanne said, “especially with the infirm. Love them well. Oh yes! Be kind. It is a great grace God is giving you. In serving the aged, it is [God] himself whom you are serving.”

Such was God’s little joke on me, reissuing the demand to live generously in my situation and as a duty to God no less.

Jeanne Jugan, it turns out, will be canonized on October 11. As a young woman in early 18th-century France, Jeanne became increasingly aware of the condition of destitute, old women and began taking them in. News of her charity spread, and she attracted more residents and other women interested in living in the house and serving. With the community of elderly women and associates growing, they moved to a series of larger and larger houses, leading eventually to the established community and network of houses of the Little Sisters of the Poor.

Despite the noble simplicity of her vocation, however, Jeanne found herself encountering opposition and betrayal. The occasional turndowns, slaps in the face (both literal and symbolic), and “not in my backyard” reactions all pale in comparison to the worst offense.

That came from a priest, the Abbé Auguste Le Pailleur. As the confessor of two of Jeanne’s early companions, Virginie Trédaniel and Marie Jamet, he gained influence among the small band of the first sisters. In 1843 he called a meeting of the community, which, instead of reelecting Jeanne as leader, voted for Jamet, a person Le Pailleur could dominate.

But he was not done. He now decided history was to know him as the founder, and many believed him. The hoax went so far as to become part of the training of the community’s novices. Only after Jeanne’s death was the truth about the founding restored.

Le Pailleur’s final blow was to recall Jeanne from her labors in the field to the motherhouse for what turned out to be her forced permanent retirement.
These betrayals complicated her story for me. This woman who seemed to be calling me to self-sacrifice—“Refuse God nothing. .  . . Accustom yourselves to do everything for him. .  . . Let us love him very much, that is all that is necessary”—did not find that road smooth.

Though eclipsed in nearly every way, Jeanne’s submission to what happened was nearly complete. But was that the call to me: To accept every slight, large or small, every time someone rejects or neglects the value of what I have done or does not respect me as a person? To welcome every unreasonable demand? To live these words of Jeanne: “In our joys, in our troubles, in the contempt that others show us, we must always say, ‘Thank you, my God,’ or ‘Glory to God’ ”?

I had to ask myself whether I could live for God and others while giving up recognition and support, as when the Catholic hospital abruptly shut down the program that matched me with my elderly friend due to “budgetary reasons,” leaving us to figure out how to continue the relationship on our own.

Jeanne’s reaction to the events that befell her did not take the form of righteous indignation or self-pity. She did not let the wrongs against her make her resentful. The open hands with which she served others were also open hands through which she allowed credit for her work to pass.

Still, she didn’t completely take things lying down. To Le Pailleur she once said, in a tone that history does not note, “You have stolen my work from me, but I willingly relinquish it you.” Late in life others would overhear her saying, to no one in particular, “I began the work, all the same!”

The call to service does not mean being perfect or never encountering difficulties. While Jeanne rarely considered her own limitations, she taught me to honor my own. And she helped me gracefully bear a lack of recognition and support while not letting myself get walked over.

My favorite image of the new saint is when she lived in the infirmary after 1870, nearly blind. When the almost 600 Little Sisters novices would leave their home, Jeanne’s infirmity would not prevent her from going to the window to wave and smile at them—the real spirit behind the sisters.