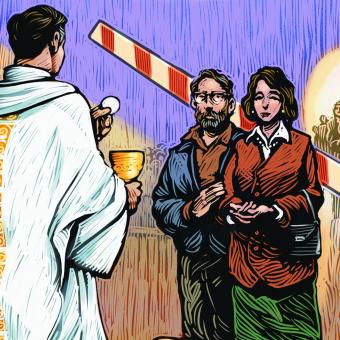 The Austrian bishops have offered remarried Catholics a path to the sacraments for 30 years now. Let’s follow suit.

A number of years ago, during a forum for divorced and remarried Catholics at a Jesuit retreat house in Austria, a woman shared her story: “After my divorce I went through a long period of deep self-doubt and depression. In addition I had difficulties with my two children. When I eventually got to know my new husband, he was the one who returned me back to life.”

As moderator of this forum, I asked her, “And how do you feel before God today?” She responded, “I am totally convinced that he does not judge me, just as he did not judge the adulteress in the gospel. I can stand before him and be myself, with all my faults. Most of all, though, I am thankful to God for bringing this new partner into my life.”

“What about the church?” I asked her hesitantly. “It doesn’t forgive me,” she said.

I couldn’t help but think of a 1960s spaghetti Western, God forgives  . . . I don’t. What worries me about this attitude is that it should be the core business of the church to make God’s mission to the world visible in ourselves. God is full of mercy—that’s what Jesus kept trying to tell the numskull religious authorities of his time. His most telling illustration of that was the parable of the father’s mercy toward his two lost sons (Luke 15).

After a divorce, does the church perhaps leave people, to use the title of another famous Western, Unforgiven, and in the process become merciless instead of compassionate?

In the continuing discussion that day, I recounted a conversation with a divorced, remarried woman in a difficult situation who told me of her deep longing to receive communion. I told her about Pope John Paul II’s teaching that she could receive communion if she and her new husband practiced abstinence. She explained that while she was willing to do so, she feared her husband would force her and her two children to leave, and she wouldn’t be able to care for the children on her own.

One of the Austrian bishops participating in the forum, a moral theological hardliner, chimed in with the comment, “But that’s an exception!” To which I say, “Exactly!”

That’s also how the Austrian bishops saw it in a pastoral letter they issued more than 30 years ago. In principle the church bars divorced and remarried Catholics from the reception of communion, but in concrete situations it can and should act pastorally, like a caring head of a household. The Austrian bishops’ letter put it this way: “According to the traditional practice of the church, [divorced and remarried Catholics] cannot participate in the full sacramental life, except when there are special circumstances that in each individual case will need to be clarified further in a conversation with an experienced priest.”

In a document of the Vienna priests’ council, Auxiliary Bishop Helmut Krätzl then defined some concrete conditions and guidelines for special circumstances—a kind of pastoral checklist for experienced pastors. These guidelines encourage confessor priests to admit remarried divorced Catholics to the sacraments:

• When the first marriage has been dissolved for a significant enough time that a reconciliation is no longer realistic.

• When the person, if he or she played some part in the dissolution of the first marriage, has repented of his or her actions and tried, insofar as possible, to make amends for them.

• When a later marriage has proven itself over a longer period as a moral reality with new obligations toward the partner and, possibly, children born to this marriage, so that dissolution of this second relationship would destroy a moral good and create additional damage.

• When this second marriage has shown clear signs of a faith life, such as personal religious practice (prayer, participation in worship, etc.) and conscientious religious education of the children.

• When under these conditions, remarried divorced people, with sincere religious motivation, ask to be admitted to the sacraments.

• When such permission would not create a scandal in the parish community.

This approach reflects what many great theologians said decades ago, including Karl Lehmann, Walter Kasper, and Joseph Ratzinger, all of whom were cited by Krätzl. Today two of them are cardinals and one of them is the pope. Clearly there are good and weighty theological reasons to expand to the church worldwide the kind of practice the Austrian bishops provided for in their pastoral letter.

But in addition to the theological reasons that support a worldwide expansion of the pastoral experiences in Austria, there are also practical reasons. There are few parishes in which remarried divorced Catholics aren’t already fully integrated. They serve on parish councils, are godparents at baptisms, and participate in the sacraments—regardless of whether they have official permission or not.

In many parishes a kind of “pastoral peace” has been established. Here in Austria the dioceses have contributed to this peace by training priests for such a “ministry of reconciliation,” helping to find solutions for individual cases in what are often very difficult situations. Life always entails a mix of guilt and tragic loss. No one ought to judge. And pastoral care ought to be healing.

Neither Cardinal König nor his two successors have had to take the Austrian pastoral letter back. However, the three bishops of a southwest German province—Lehmann, Kasper, and Josef Saier—who had taken a similar approach in their own 1993 pastoral letter, were not so fortunate. In their letter they had invoked a well-known practice from the early church that had allowed a church-approved remarriage.

When the Congregation for the Doctrine of the Faith, under then-Cardinal Ratzinger, ended their pastoral experiment, it referred to this practice: “According to some, those who are divorced and remarried should seek a conversation with a knowledgeable and experienced priest to objectively review their actual situation. That priest, however, was to respect their eventual conscientious decision to partake of the Eucharist without implying an official permission for it.”

The doctrinal congregation acknowledged that the practice had existed but argued it should not be held up as a model because it did not succeed in becoming an officially accepted practice. But does that make sense? If it was allowed, and for a significant period unopposed, doesn’t that mean that in principle it is possible?

Besides, even if eventually this practice didn’t become accepted in the Roman Catholic Church, it certainly did so in the larger universal church, including the Orthodox churches. The Orthodox churches, despite Jesus’ strict instructions, allow for a remarriage in individual cases after a certain period of penance; the decision is left to the bishop as part of his pastoral care for the faithful who have been entrusted to him.

Behind closed doors the Austrian bishops have recently been working on a new pastoral document on divorce. It was prompted by a broad reform dialogue in Austria, which was cut short by an intervention from Rome. As of this writing, the new document has not been made public but has apparently been sent to Rome for approval. What will the end result be? Will the Vatican finally succeed in what it has been trying to achieve for decades: ending the pastoral path with divorced and remarried Catholics in the Austrian church?

On this issue, the worldwide Catholic Church should learn from the Orthodox churches, as Cardinal König urged almost 50 years ago. In 1980 the dioceses in Austria tried to do just that. Rather than taking back this by now well-established pastoral practice, the church around the world should use it as a model for a long overdue new approach to ministering with divorced and remarried people that would bear many good fruits.

1. The church as a whole is too harsh in its treatment of divorced and remarried Catholics.

2. The church’s official teaching on divorce and remarriage:

59% – Affirms the value of lifelong marriage, but could be more pastoral toward those who are divorced.
57% – Is an unacceptably rigid obstacle for those whose marriages have failed.
37% – Doesn’t really matter to most Catholics because they ignore it anyway.
11% – Is appropriate and important in counteracting secular attitudes toward divorce.
9% – Other

3. By relaxing the rules on divorce and remarriage, the church would just be bending to secular culture.

Representative of “other”:
“It would be exercizing the forgiveness of Christ while recognizing the difficulties of marriage in the modern world.”

4. If the church is more accepting of divorce and remarriage, Catholic couples will be more likely to opt for a divorce when problems arise.

5. The greatest scandal in the church related to divorce is caused by:

Representative of “other”:
“Unforgiving church leaders and judgmental parishioners are equally to blame.”

6. When a pastor recognizes someone in the communion line who he knows has divorced and remarried without an annulment, he should:

Father Paul M. Zulehner, professor emeritus for pastoral theology at the University of Vienna. He is the author of more than 50 books, including Christenmut: Geistliche Übungen (Christian Courage: Spiritual Exercises, Gütersloher Verlagshaus, 2010). 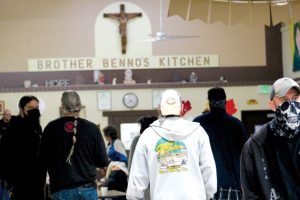