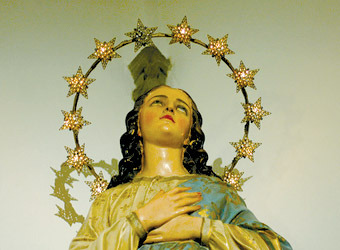 For 16 years I prayed them with my entire family before Christmas.

I prayed them as a teenager, for the repose of the soul of parents of friends; I prayed them as a teacher with students to honor the school’s patroness, St. Rita of Cascia, on the days before her feast day; and just this year I prayed privately to Our Lady of Guadalupe in preparation for important meetings on U.S. Hispanic ministry. Novenas have been part of my life from its beginning and part of the life of the church since its very first centuries.

The word novena derives from the Latin word for nine (novem), and it refers to nine days of private or public devotion and prayer; the days can be consecutive—as the nine days of mourning following the death of an individual—or not—as in nine first Fridays of every month for nine months, as in the Novena to the Sacred Heart. Novenas usually consist of a brief scripture passage, a novena-specific prayer that is repeated every day, some type of litany or petition/response prayer, and often a hymn or canticle.

There are different types of novenas, traditionally identified as of mourning, of preparation, of prayer or petition, and of penance, arranged in order according to their historical development. The origin of setting aside nine days is not found in the Judaic tradition, but in Greco-Roman pagan celebrations. The Romans dedicated nine days of prayers to influence the gods, and both the Greeks and the Romans had periods of mourning that lasted nine days. Christians adopted this mourning practice certainly as early as the fifth century, and later it was particularly adopted by the Anglo-Saxons and the Franks.

Novenas of preparation for Christmas developed in seventh-century Spain, in which the nine days reflected the nine months of Mary’s pregnancy, and the joyful expectation of Jesus’ birth. By the 17th century, novenas were celebrated in preparation for the feast of religious founders in Italy, nine days perhaps in reference to the nine days the apostles spent in prayer between Jesus’ ascension and Pentecost. Around the same time, in northwestern Europe, novenas for healing through the intercession of Mary and the saints developed, often followed by a novena of thanksgiving if the prayers had been answered. It was not until the 19th century that the church bestowed indulgences to specific novenas.

Whether it is to pray for the repose of the soul of a deceased person, to consciously prepare for a religious feast day, to ask for the intercession of the Virgin Mary or of St. Jude when facing a difficulty or illness, or in order to benefit from the promise of complete remission of sins, novenas can be for us “Holy Saturdays” of mourning, “Advent” times of anticipation, and “Lenten” periods of healing and transformation. Novenas offer us an opportunity to purposely dedicate some time each day to prayer, communally or individually, to remember that we are called to be consistent and persistent in prayer.