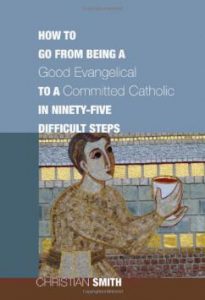 Thomas Kuhn’s 1962 book The Structure of Scientific Revolutions argued that scientific inquiry depended on frameworks of assumptions that he called “paradigms.” Periodically, the process of inquiry uncovers “anomalies” in those frameworks that lead to their being overturned.

In How to Go from Being a Good Evangelical to a Committed Catholic in 95 Difficult Steps, Christian Smith attempts to apply Kuhn’s framework to the journey made by evangelical Christians who enter the Catholic Church. Smith, a professor of sociology at Notre Dame who has made this journey himself, argues it involves a similar process of uncovering “anomalies” in the evangelical “paradigm” that ultimately lead to a radical shift in worldview.

Smith identifies a list of “anomalies” familiar to Catholic apologetics: the continued fissuring of Protestant denominations, the diversity of Protestant interpretations of scripture, and the unspoken dependence of Protestant doctrine on elements of tradition like the Nicene Creed. Others are cultural: Smith despairs at the lack of deep intellectual traditions among evangelicals, and he has little patience for the proliferation of evangelical special-interest Bibles and self-help books that weigh down the shelves of evangelical bookstores.

At the same time Smith’s efforts to write a step-by-step guide for evangelicals considering swimming the Tiber make it harder to apply Kuhn’s concepts. Smith’s chapters on Catholicism’s “revolutionary science” come across as primarily a list of things he likes about Catholicism rather than a systematic presentation of its conceptual superiority. Kuhn’s theories could well be used to cast a light on the present intellectual crisis of modern Protestantism. Doing that, however, would require a very different book.