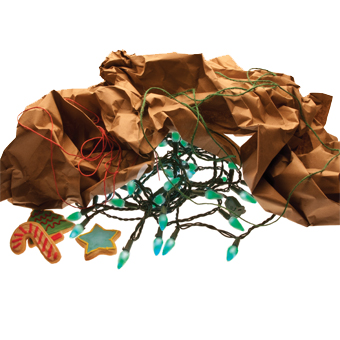 Let’s not only be green when summer’s here but also during the most wonderful time of the year.

The anticipation was over, the gifts all opened, and nothing left to do except take it all in. Even when I was little, it was one of my favorite moments of Christmas. I'd sit with my loot sorted next to me and survey the living room while peeling the customary orange from my stocking. Red, green, and patterned wrapping paper covered the floor, and the cats, high on new catnip, would be attacking a bow under the tree.

I loved getting the orange, along with an apple and nuts (and chocolate, of course) in my stocking. It felt so Little House on the Prairie, as if these were exotic fruits, a special treat savored in the middle of the winter and not an ordinary purchase at the grocery store. I imagined Pa trekking home from town with brown paper packages—one each for Ma and us girls—getting caught in the blizzard and having to eat our special Christmas treat to survive. Ah, those were the days!

It's not that I wanted to give up the Nintendo, books, and whatever other toys I got for this frontier fantasy. But at some age I started to see the effect of all my gifts. Eventually my moment of Christmas bliss was over, and we would have to stuff trash bag after trash bag with packages and shiny wrapping paper. According to use-less-stuff.com, Americans produce 25 percent more waste from Thanksgiving to New Year's, amounting to 25 million tons of extra trash.

Is this any way to celebrate Christ's birth?

Christmas is about celebrating the incarnation: God became human, sanctifying our lives on earth. In becoming human, God also became part of all of creation. As Elizabeth Johnson wrote in the April 2010 issue of U.S. Catholic: "By becoming flesh the Word of God confers blessing on the whole of earthly reality in its material dimension, and beyond that, on the cosmos in which the Earth exists. . . . In place of spiritual contempt for the world, we ally ourselves with the living God by loving the whole natural world, part of the flesh that the Word became."

If we understand Jesus to be sanctifying all of creation, we should reevaluate our celebrations of his birthday and make them look more like Earth Day.

Does that mean that we should become Grinches (he was green after all) and steal all the presents, decorations, and food from little Cindy Lou and the other Whos?

On one hand, I love Christmas. I love setting up nativity scenes and going to Midnight Mass, but I'm also not above turning the radio to the station that plays non-religious Christmas carols 24/7 and singing along. I love the lights, the tree, the good food, and the presents. I hate shopping 11 months a year, but I have to go to the mall at Christmas time. And I don't want families to stop traveling across the country to see each other.

On the other hand, Whoville still celebrates Christmas without all these extras anyway. Christmas is about more than gifts and parties, the Grinch learns. This is also the message we hear every year from those fighting the "war on Christmas." Much like the Christmas warriors, I am proposing that we put "Christ back into Christmas." I just want to do so by taking Christ—and ourselves along with him—out of Walmart rather than insisting that he be in there.

So what's a Christmas-loving tree-hugger like me supposed to do? Cut down a tree, to start. Cutting our own tree is another of my favorite Christmas memories, and natural trees are better than fake ones, which are made with toxic chemicals, are shipped from China, and eventually end up in landfills.

According to Earth911, one tree can absorb more than a ton of carbon dioxide over its lifetime, and the National Christmas Tree Association says 40 to 45 million are planted each year (best if grown organically). Ninety-three percent of Americans recycle their trees into mulch, and more families are buying live trees that they can plant in the backyard after Christmas.

Lights and decorations? Go for tasteful, not tacky. As a young person without many Christmas decorations, every year I'm tempted to buy 100 plastic ornaments for $10, but then I remember that they don't actually look that good. I'd rather buy a few quality items—like fair trade nativity sets from around the world—than kitschy plastic reindeer.

And do you really need to blow out the entire electrical grid with a Las Vegas-scale light display? Lights are fun, though, so here's another idea to lessen your energy consumption: Turn off all the other electronic gadgets—the games, computers, and TVs that keep everyone in their own rooms—and spend some quality time together around your pretty tree covered in environmentally friendly LED lights and fair trade ornaments.

Gifts are probably the hardest part of going green at Christmastime. Our consumption of more and more "stuff" is driving environmental destruction, and it hardly reflects an appreciation of God's gifts to us or the dignity of humans halfway around the globe.

We often hear the call to spend more to jumpstart the economy, but that solution only jumpstarts an unsustainable and unjust economy. While the Walmart business model makes for cheap presents (even cheaper on Black Friday), it relies on cheap labor abroad and at home; cheap natural resources, especially oil for production and shipping; and high volume of sales. Our insatiable demand for more drives the supply, but in this finite world the supply is not endless.

Since Christmas is a time when we put a lot of money into our economy, it's a good time to support more sustainable economic models, such as buying locally or choosing fair trade products.

Still, I don't have to explain all that to a 5-year-old whining for a particular toy. I can't even stem the giving in my family of all adults. I'm not alone. Family spirituality writer Susan Vogt reports on her website (susanvogt.net) that her family wasn't terribly enthusiastic about their experimental "nothing new" Christmas. Still, they did come up with a variety of alternative gifts: crafts (just don't count on receiving anything crafty from me!), homemade cookies and candies, tickets to an event, favors, time, and charitable donations.

Another option is to limit gifts to immediate family or do a gift exchange with relatives so that each person has to buy only one gift. Last year I decided to do all my shopping in one day, except for a few online purchases. By limiting my mall exposure, I found that I wasn't as tempted by stuff I just needed to include in my own letter to Santa.

How to wrap these gifts is my next step to greening Christmas. This year I'm buying reusable fabric gift bags—I'm not crafty enough to make them myself or decorate brown paper bags or old newspaper, though those are options, too.

The biggest way my family has tried to green up our act at the holidays is to buy an organic, free-range turkey for Christmas dinner rather than a turkey bred for breasts so big that it can't stand, fly, or even mate. Potatoes, carrots, onions, and other vegetables—not to mention apples and pumpkin for pie—can be found locally in Chicago even in December, and they're much better than produce trucked an average of 1,500 miles from farm to shelf.

If food is more expensive and tastier, you might think twice about wasting it, too. Every year 28 billion pounds of edible food is wasted, according to use-less-stuff.com. Eating your leftovers might be the most enjoyable way to go green. I don't care if you've eaten turkey five days in a row.

As much as I admire their pioneer spirit, I don't want to go back to the Little House on the Prairie way of life. I'm an environmentalist because for the most part I like our society and want to preserve it—including our festive celebration of Christmas.

And the Survey Says…