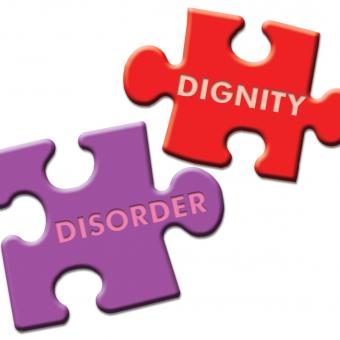 Church teaching on gay and lesbian people must reflect their dignity as God’s daughters and sons.

Homosexuality has claimed the job of another employee of a Catholic institution, but not because he publicly supported same-sex marriage. Indeed, Daniel Avila, until recently a policy adviser on issues of marriage and family for the U.S. bishops’ conference, lost his job for going too far in the other direction.

Avila’s October 28 column for The Boston Pilot posited that when “natural causes disturb otherwise typical biological development, leading to the personally unchosen beginnings of same-sex attraction, the ultimate responsibility, on a theological level, is and should be imputed to the evil one.” In other words Avila blamed any biological basis for homosexuality on the devil. The archdiocesan newspaper’s editors retracted the column on November 2 and issued a dual apology, one from the editors and one from Avila himself, who resigned his role at the bishops’ conference the following day.

Avila’s apology admits that his position is out of line with the teaching that every human being is made in the image and likeness of God, and as such deserves respect and dignity. “The church opposes, as I do too, all unjust discrimination and the violence against [homosexual] persons that unjust discrimination inspires,” he wrote, apologizing “for the hurt and confusion” his column caused.

Truth be told, however, Avila’s position is a natural if unfortunate progression from the church’s official teaching that a homosexual orientation is an “objective disorder” to an “intrinsic moral evil.” If one grants, as many biologists and psychologists do, that homosexuality is a natural—and therefore created—occurrence, a next logical step is to propose, as Avila did, a “disorder” in the process of creation itself—a theologically absurd position utterly out of line with Catholic teaching on creation.

This possibility reflects a serious problem with the current formulation of the church’s teaching, and one that must be remedied. To put it bluntly, to describe any human being as “objectively disordered” does not reflect the more fundamental truth that all human beings are equally made in God’s image and likeness. While church teaching restricts physical sexual expression to marriage between a man and a woman, church leaders must also find a way to affirm the created value of sexuality that does not fit the heterosexual model.

Gay, lesbian, and bisexual Christians have long complained of the “spiritual violence” done to them by traditional Christian attitudes toward homosexuality. It is just to describe the ideas Avila expressed in this way because they call into question the fundamental dignity of God’s daughters and sons who are gay, lesbian, or bisexual.

These women and men are no more in need of redemption than any other human being because of their sexuality, and the U.S. bishops need to say so in unequivocal terms, especially now that one of their own advisers has harmed lesbian, bisexual, and gay people in such a profound and shocking way—violence that is even more damaging to young people struggling with their sexuality.

Almost simultaneously with the Avila situation came other, better news of the intersection between Catholicism and homosexuality: Anthony Alfano, the student body president at DePaul University in Chicago, came out as a gay man, speaking eloquently of his struggle growing up in a devout Catholic family, including his own teenage attempts at suicide. But he also spoke of the welcome and encouragement he received at the nation’s largest Catholic university, and the support of its president, Vincentian Father Dennis Holtschneider.

It is Alfano’s story of self-acceptance and courage, and DePaul’s authentically Catholic response—rather than Avila’s perversion of our tradition—that I hope we all will carry with us as we continue our own journeys toward integrity, confident of Jesus’ promise that the truth will indeed set us free.