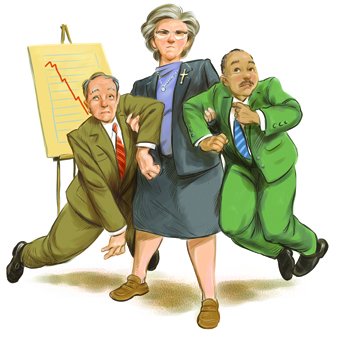 To protect consumers and the environment, women religious lead the growing movement that’s taking on powerful corporations—one share at a time.

On May 6 this year, Sister Nora Nash stood before Goldman Sachs’ powerful CEO and his board for the investment bank’s annual meeting. Nash, a Sister of St. Francis of Philadelphia who wears wire-rim glasses and a tentative smile, was calling upon the investment bank to review its senior executive compensation policies and to report its findings to shareholders.

Goldman Sachs had just rewarded its top executives with $70 million in bonuses, even as workers were laid off, in the wake of spending half a billion dollars in legal fees and another $550 million in fines to the Securities and Exchange Commission for misleading clients.

A coalition of allies across the country had signed onto the resolution, including the Mount Angel Benedictine Sisters and several other orders. In fact, women religious have often been the face of shareholder advocacy.

“We’re just asking them to look at their policies and consider what part is greed,” says Benedictine Sister Marietta Schindler, who worries about the chasm between sky-high executive compensation on Wall Street and unemployment and empty stores on Main Street—and what that portends for America’s future.

Although this particular resolution garnered only 4.1 percent of shareholders’ votes, there is a strong case to be made that engaged shareholders are making a difference. They may even be at a tipping point for sparking corporate reform, should more people speak out.

Their goal is to create a movement powerful enough to change a bedrock value of corporate America, the value that holds that corporations (which legally have the right to be treated as “persons”) have only one responsibility: to maximize their own short-term profits for shareholders, no matter what the cost to society or the environment.

Joel Bakan, author of The Corporation (Free Press), famously points out that when an actual citizen acts that way, they are on their way to meeting a clinical diagnosis of psychopathy.

Can corporations become better citizens? Former New York Governor Elliot Spitzer argues there are only three ways to change a public corporation’s behavior: through regulation, litigation, or through the collective power of shareholders.

“I started at this desk in 2000,” says David Berdish, manager of sustainable business development at Ford Motor Company who previously worked 17 years in the company’s manufacturing offices. “I was blown away by the impact of shareholder resolutions on management. I had no idea how powerful it was.”

“Unfortunately, this is one of the best-kept secrets of the Catholic Church,” says Sister Pat Daly, a Sister of St. Dominic of Caldwell, New Jersey and executive director of the Tri-State Coalition for Responsible Investment, an organization of 40 Roman Catholic dioceses and congregations in the New York metropolitan area. “You’re not going to hear about this work from the pulpit, and that’s a shame. Faced with devastating realities here in the United States and around the world, we ask how to be faithful to preaching the gospel in these times—well, this is where the rubber meets the road.”

There were six shareholder resolutions filed with Goldman Sachs in 2011, and more than 1,000 total in the United States. Tallies show about 38 percent concerned social policy goals, including environmental and human rights issues and concerns over political contributions; 30 percent were related to executive compensation; and 32 percent covered other corporate governance concerns.

The progressive Social Investment Forum reports that shareholder support for social and environmental issues is rising. For instance, a resolution at Chevron calling for an impact report on “fracking”—the controversial process of injecting millions of gallons of water and chemicals into underground fractures in order to release oil and gas—got 40.5 percent of shareholders’ votes. A resolution calling for beverage container recycling earned 29.3 percent of the vote at McDonalds, and a demand for sustainability reporting at Layne Christensen, a water infrastructure services company, garnered 92.8 percent.

The conservative Manhattan Institute advises that the passage of the Dodd-Frank Wall Street Reform and Consumer Protection Act gives shareholder activists “more ammunition with which to fight” boards and management, largely because Dodd-Frank mandates that shareholders get a “say on pay” regarding executive compensation.

Father Séamus Finn, director of social justice for the Missionary Oblates of Mary Immaculate, agrees that Dodd-Frank is a game-changer. Finn is also on the board of the Interfaith Center for Corporate Responsibility, an umbrella group that supports coalitions like the one Nash spoke for at the Goldman Sachs meeting.

The ICCR was born when a handful of faith-based organizations that owned shares of companies doing business in South Africa successfully petitioned management of those companies to divest until apartheid ended. It seemed quixotic but gathered force and is now credited with being a key moral and financial influence on ending apartheid.

“I use the term ‘engaged shareholder,’ ” says Daly. “I’m a very reasonable person in the midst of these companies. The ICCR and Tri-State CRI communities are voices of reason.”

At times Daly’s Tri-State Coalition may buy a minimum number of shares in a company that does not meet their screening standards (ExxonMobil, for example), so that they can speak out to its management through a shareholder resolution. More typically, though, the coalition owns shares in companies its directors believe in, like Ford, and they engage in surprisingly cordial dialogue with company management.

Daly became one of the best-known faces of shareholder activism partly because of her longtime advocacy at Ford—a relationship that has been widely reported and was even the subject of a doctoral dissertation at the University of Michigan.

In “Climate, Cars, and Catholic Nuns,” Melissa Forbes examined how Daly encouraged the company to step into its current role as an industry leader in social and environmental responsibility. Several managers at Ford referenced their Catholic backgrounds with Forbes, one joking, “I was brought up in a good Catholic school, so I’m not going to give Sister Pat a hard time.”

Ford’s Berdish likes to tell the story of how Daly urged Ford in 2008 to set a greenhouse gas emissions reduction target. No other U.S. automobile manufacturer had done so, but Daly reminded executives that there was a precedent: Ford had been first to withdraw from the Global Climate Coalition, an infamous lobbying association opposing action on greenhouse gas emissions. Ford left in 1999. General Motors and Chrysler followed in 2000.

Ford agreed to set the emissions target, meaning the shareholder resolution became moot. Most resolutions evaporate at that point, but Berdish and others at Ford wanted to support education on climate change. Ford and the engaged shareholders issued a joint statement about Ford’s new policy at the 2008 meeting.

“I believe it’s your obligation as a Catholic to make your work fit with your faith,” says Berdish. He says he’s seen far fewer shareholder resolutions in recent years and frets that the movement may be losing momentum. “Either that, or perhaps it’s just at Ford,” he says.

Berdish’s concern brings Daly one of her trademark, good-humored laughs. “That’s exactly why they’ve seen a drop-off,” she says. “The word is out that if you have a concern, Ford will meet with you.”

De La Salle Christian Brother Peter Tripp, who serves on the board of Christian Brothers Investment Services, says, “There is growing recognition that the voices of shareholders can eventually, if not immediately, make a difference.”

“You have to be optimistic in this work,” says Nash, who ticks off successes, including how Best Buy and Walmart agreed not to sell explicit video games to minors. She remembers sitting next to an executive from a major corporation who told her that what she and other engaged shareholders were doing was “mind-boggling,” and that they had succeeded in calling him to reexamine what he was doing. “We work at this, and the day does come that you’re not going backwards,” she says.

With the twin calamities of the wounded economy and the looming threat of climate change, Finn urges the church and Catholics in the pews to speak out and convert others.

“The church has done a great job in traditional missionary work, work that was full of heroic sacrifice and virtue,” he says. “One of the new opportunities to shed the light of the gospel in today’s world is through the business community and through investments, making sure those investments are consistent with our Catholic identity. This, too, is true missionary work.”

Most Americans are not directly invested in the stock market. However, everyone lives in a state with a pension fund for its public employees, most people save money in banks that invest that money, and many own at least a small 401(k) or are an alumnus of a college with a fund.

“The institutional investor has control of more votes and can wield more power in pressing an issue,” says Tripp. “But the beliefs on issues start with individuals.”

Finn, who was at Nash’s side at the Goldman Sachs meeting, thinks the loss and fear resulting from the 2008 financial crisis was a vivid lesson in what we can expect to reap from unbridled greed and inadequate regulation in the markets.

The Federal Reserve reported in March 2009 that U.S. households’ net worth fell by $11 trillion—nearly 18 percent—in 2008. That wealth simply disappeared. “Disappeared,” Finn emphasizes. “Are we ready to learn from that lesson?”

Bang for the buck?

Not everyone agrees that engaged shareholders make much of a difference. Robert Kennedy, Catholic studies professor at the University of St. Thomas in St. Paul, Minnesota, who consults with dioceses about their investments, doesn’t even think the broader category of socially responsible investing has much oomph. “It’s still a marginal player,” he says.

Perhaps, but according to the Social Investment Forum, assets managed with some type of socially responsible guidelines have increased more than 34 percent since 2005, while the broader pool of professionally managed assets has increased only 3 percent. Today nearly $1 out of $8—just over 12 percent of $25.2 trillion in professionally managed assets—is part of some type of socially responsible investing.

Kennedy also sees a problem in that people define social responsibility differently. “I know at least one investment manager who deliberately sought to include defense contractors because he felt it was patriotic and socially responsible,” he says.

Another criticism of engaged shareholders is that those sisters are never seen calling corporations to task for abortion. There’s a good reason for that, says Daly. First, there are only a handful of companies that manufacture abortifacients or provide abortions; second, Catholic religious orders screen these companies from their investments. You cannot be a shareholder advocate in a company in which you own no shares.

Kevin Schmiesing, a research fellow with the libertarian Acton Institute, argues that individual Catholics in the pew cannot be expected to analyze the companies in which their mutual fund invests. The U.S. bishops provide guidelines for their own use (see sidebar, page 20), but, he notes, not for the individual investor. In any case, he believes that investors are at a moral remove from any evil done at corporations. “I’m not saying to have a laissez-faire attitude,” he clarifies. “You are at some sense cooperating with the companies, but you can’t be held morally responsible. In a fallen world, we all cooperate.”

Yet, in fact, it’s a simple thing to invest in a socially responsible manner, especially since most studies show screened mutual funds do as well or better than funds that are only concerned with the next quarter’s profits.

It’s also a simple thing to remember Pope John Paul II’s words: “Even the decision to invest in one place rather than another . . . is always a moral and cultural choice.”