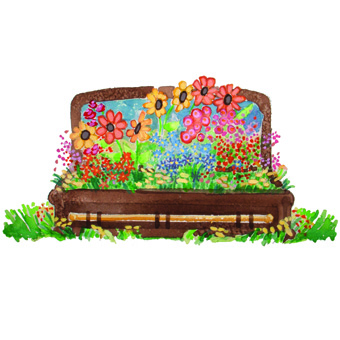 It’s time we laid our current American burial practices to rest in favor of a more authentically Catholic—and eco-friendly—approach.

Last year I was contacted by a woman named Jean who was seeking to arrange a “green” burial for her mother, who was nearing her last days in hospice. In my role heading up the Green Burial Council, a nonprofit organization working to encourage environmentally sustainable end-of-life rituals, I’ve helped hundreds of people seeking a funeral service with a minimal impact on the body and the environment. This was the first time, however, I’d aided someone whose affiliation as a Catholic seemed as strong as that of being ecologically conscious.

“My mother cared deeply about the planet,” Jean told me. “But she really cared about her faith, too.”

Knowing that being eco-conscious and Catholic are not incompatible, I set out to find a cemetery that would accommodate Jean and her mother. The first call I made was to a Catholic burial ground not far from their home. The person I spoke with at the cemetery balked at the notion of allowing anyone interred in “just a shroud,” as Jean’s mother wanted, rather than being placed in a casket. When I reminded him that Jesus was laid to rest in “just a shroud,” he told me, “Maybe so, but we’re just not comfortable with that.”

While this man was speaking only as a cemetery operator, he could have just as easily been representing the majority of American Catholics, who, like most Americans over the past century and a half, have become alienated from a way of caring for the dead that the rest of the world has always found appropriate, practical, and comforting. But thankfully, because of the burgeoning green burial movement in this country, growing numbers are getting reacquainted with the “ashes to ashes, dust to dust” customs of our ancestors that better serve God’s people and planet.

Green burials allow returning to the earth in a manner that interacts with, rather than impedes, the natural process of decay and regeneration. A family forgoes embalming their loved one’s body with toxic chemicals and avoids non-biodegradable metal caskets and burial vaults. Instead, the deceased, often washed by family members, is wrapped in a shroud or placed in a simple wooden casket before being lowered into the ground. Some families even choose to help dig the grave rather than to rely on heavy, energy-intensive equipment.

While it can take place anywhere within a conventional cemetery (no state laws prohibit green burial, though most cemetery policies do), this kind of interment can also become a mechanism for creating sacred space within protected natural areas, which enables us to experience life and death not as separate but as closely entwined. It’s the antithesis of what we’ve been doing in this country for a long, long time.

The genesis of the American way of death goes back to the Civil War, when enterprising individuals discovered a market for the disinterment from battlefields of deceased Union Army officers. Their bodies were embalmed with arsenic and transported back home for burial. When the war ended, the practice of embalming did not, due in part to the fact that chemical companies, which manufactured embalming fluid, also founded the nation’s first mortuary schools.

The cross-country funeral of Abraham Lincoln, which took several weeks to complete, is often credited with putting embalming and the modern casket on the map, as well as the notion that delaying the time between death and burial was not only decent but perhaps preferable.

During this same era, burial vaults were developed in England for the express purpose of deterring grave robbing. We began using them in the United States in the early part of the 20th century to prevent graves from settling, which increasingly became a problem as caskets grew larger.

As vaults became more ubiquitous, so did the use of equipment needed to haul them around burial grounds. A Catholic cemetery operator once told me that it seemed less than decent to think of heavy machinery “running over loved ones,” and potentially crushing their graves. I reminded him the heavy equipment that might do this is primarily used to move vaults, a risk that could be eliminated if vaults were, too.

Vaults, along with the use of heavy caskets and the practice of embalming, were sold to the American public because of the role they played in “protecting” a body. This way of caring for our dead that we regard as “traditional” is rarely seen outside of this country. And we’ve been paying quite a price for it.

Not only does an American pay on average nearly $10,000 for the typical funeral and burial, but the environmental impact is also substantial. The Green Burial Council’s concerns include the protection of worker health, the conservation of natural resources, the reduction of carbon emissions, and the preservation or restoration of habitat.

Most embalming fluids contain any number of toxic chemicals such as formaldehyde that have led to higher incidences of diseases like nasal cancer and leukemia among funeral workers. The 1.6 million tons of reinforced concrete in burial vaults, along with the nearly one million tons of metal that go into caskets each year in the United States, come with a great deal of embodied energy, which contributes to climate change. Conventional cemeteries, because of their often highly manicured lawns, also require a tremendous amount of natural (and unnatural) resources like water, gasoline, pesticides, and fertilizer.

Preventing people from getting in sync with the process of decay and regeneration comes with a hefty emotional and spiritual price tag, too. For Catholics, it flies in the face of some of the church’s great spiritual teachers going all the way back to early Christian monastics, who taught us that death is something we can befriend, particularly with the help of nature.

Green burials invite us to get up close and personal with our end-of-life rituals. Rather than handing over responsibilities to others, families can get involved with everything from body preparation to grave decorating to almost anything else they deem important for honoring the dead, healing the living, and inviting in the divine. It also doesn’t take away options many families have found comfort in, such as public visitations, open-casket funerals, and even cremation. The end result is often a great deal of solace.

Several years ago I presided at a graveside funeral at a green cemetery for a 3-year-old girl. Two of the girl’s grandparents were first-generation Irish Catholics, and one of them told me how each week she visits the grave of her granddaughter, which rests underneath a small tree on the edge of a meadow. She recently remarked how the experience compared to visiting her mother’s burial plot back in Kilkenny.

“Death used to feel like a form of punishment with all those tombstones,” the woman told me. “But I don’t feel any of that here.”

Catholic cemeteries have been slow to come on board, but the Green Burial Council has approved providers in more than 40 states, including a burial ground at a retreat center run by Trappist monks and two diocesan cemeteries.

One of them, Mt. Carmel Cemetery in Detroit, started a green burial section three years ago and buried Jean’s mother. Father Charles Morris, a diocesan priest and an environmental activist since the ’70s, was happy to allow her mother to be buried in a shroud made from muslin rather than a casket. He let Jean and her sisters lower their mother’s body into the ground on ropes rather than use a mechanical device. And he encouraged the family to shovel dirt onto the grave rather than let a backhoe do all the work.

Burial practices should not be industrialized, but in this country they are. What the growing number of eco-conscious American Catholics can bring about is a kind of conversion that makes it economically viable for them to accommodate families who want to live—and die—with a lighter hand on the land.

By embracing green burials, the church can allow for a more authentically Catholic practice of caring for our dead, one rooted in a long-held spiritual tradition as well as a newer call to be good stewards of our earth.

It will take Catholic cemeteries getting on board and individual Catholics demanding it, but if enough American Catholics want to make “ashes to ashes, dust to dust” once again mean something, it most certainly will.

1. If I had the option I would prefer a green burial.

2. Our current burial practices alienate Americans from our own mortality.

3. The rituals that I think would bring me the most solace after the death of a loved one would be:

Representative of “other”:
“Remaining with the body of the deceased until the time of burial.”

4. When a loved one dies I want to see their face embalmed and made up in the casket one last time before burial.

5. I would prefer to be buried in a natural environment like a meadow instead of a cemetery.

6. The thought of my body disintegrating in the earth disturbs me.

7. If I were to plan my own funeral now, I would request:

Results are based on survey responses from 151 USCatholic.org visitors.

Joe Sehee is executive director of the Green Burial Council (greenburialcouncil.org), a former Jesuit lay minister and spiritual director, and a senior fellow with the Environmental Leadership Program.