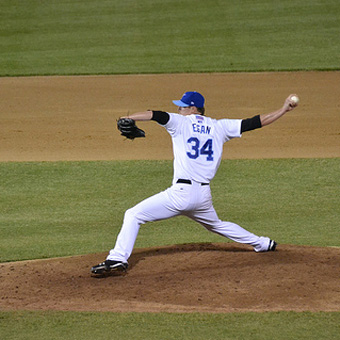 In the classroom and the stands, the president of NYU roots for God.

John Sexton, the president of New York University, holds tight to some deep truths: that his late wife is still with him, that there’s more to life than science, and that baseball and God are connected.

He is also a man of intriguing contradictions. A native of Brooklyn, he roots for the Yankees. He works within an environment of science and learning, but he holds

on to his belief in the reality of the ineffable. Surrounded by doubters, he remains steadfast in his Catholicism.

Sexton traces his enduring devotion to baseball to his childhood in the 1950s. As a boy, he worshiped Jackie Robinson, the Dodgers infielder who was the first black baseball player in the major leagues. Sexton even sports Robinson’s number, 42, on his academic gown.

But his son’s childhood forced a change in loyalties from “da Bums” of Brooklyn to the Bronx Bombers. “The Dodgers were at the level of the Trinity where I grew up,” Sexton recalls. “But my son was to be born in 1969, and the Dodgers had moved to Los Angeles.”

With no cable TV and therefore no ability to watch his team play, he had to make a cataclysmic choice. “I knew, even more than giving my son religion, I would give him the teams for which he rooted, so I had to make a choice: the Dodgers, the Mets, who were having their ‘miracle year,’ or the Yankees, who were in the pits.”

As he weighed his choice, “the 1950s Catholic in me, the person schooled in tradition” came out, Sexton says. “The Yankees had their monuments and hagiography: Ruth, DiMaggio, Mantle. The Mets didn’t have tradition. I chose the Yankees as a gift to my son.”

If you teach it, they will come

His avid interest in baseball has turned into evangelizing for the game through a course he teaches at NYU: “Baseball as a Road to God.”

“The key element is to get students to think about things that they see as mundane in a rich and nuanced way, and to do that through the trigger of something they see as an oxymoron,” he says. “One doesn’t usually think of baseball as a road to God. If one can develop that mental attitude of ‘thinking strange,’ then one adds to the richness of your experience of everything in the world.”

The students who come into the classroom run the gamut of interest in the game. “About half of them have never seen a baseball game, and about half of them are not at all religious,” Sexton says. “The most interesting student was a young woman from Korea who had never been outside of Korea until she came to NYU. She said the two things that most represent America to her are baseball and religion.”

Sexton teaches with books he considers to be part of the canon of the sport, including Shoeless Joe by W. P. Kinsella, The Natural by Bernard Malamud, The Iowa Baseball Confederacy by Kinsella, and The Universal Baseball Association Inc. by Robert Coover.

The latter is “a terrific story,” he says. “It’s very [James] Joycean and complex. It’s an obvious metaphor for God. It’s a very, very rich book.”

Sexton’s own college years saw the maturing of his beliefs.

“I grew up in the faith,” he says. “I began to become extremely interested in it at a Jesuit high school in Brooklyn. That ripened at Fordham.” It ripened so much that he went on to earn a doctorate in religion from the school.

“Happily, that was exactly as the Second Vatican Council was happening,” he says, adding that it was “very easy” in a time of the council, Pope John XXIII, the civil rights movement, and the peace movement “to reaffirm my commitment to Catholic principles and the social gospel of Christ.”

Going to bat for God

As he proceeded through academia—studying religion at Fordham and law at Harvard, teaching at St. Francis College in Brooklyn, and becoming a law professor at NYU—he brought his personal faith into a world often inimical to religion.

“It is fashionable in some intellectual circles to launch attacks” against religion, he says. “Those create a false dichotomy between science and religion, two glorious enterprises that deal at deep levels with very different realities. I know there is a God not because I can create some cognitive proof, but because I experience it as true. That is the ultimate meaning of faith.”

As an example, Sexton speaks of his late wife, Lisa, who died a few years ago. “She is present moment to moment in my life,” he says. “I believe she exists with consciousness and with autonomy. When I pass from this physical world, we will continue to be united and aware of our love for each other. That’s faith, not something I can prove.”