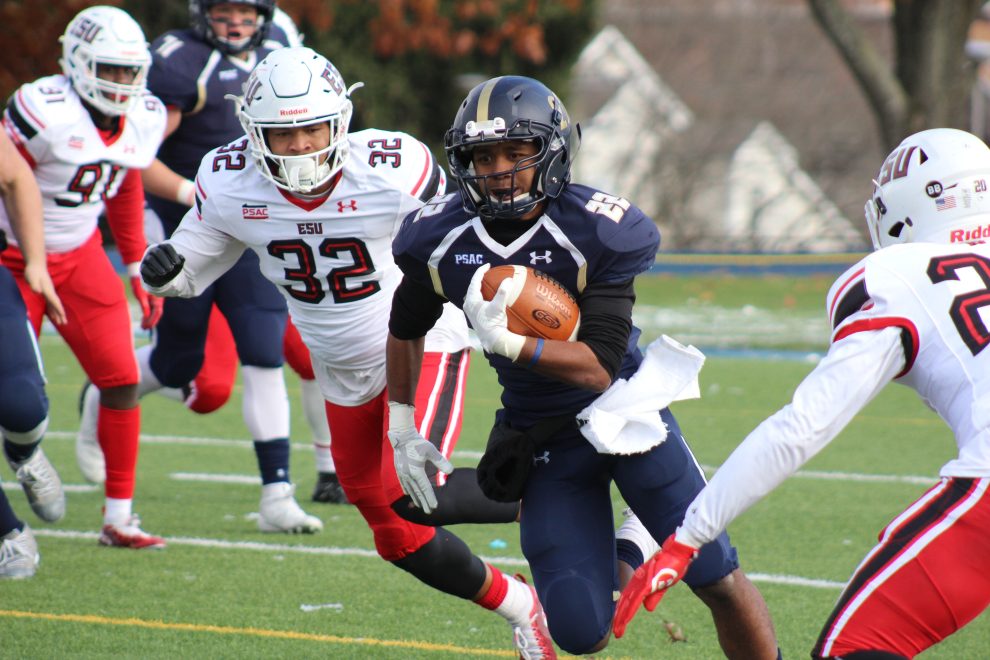 Grace follows us around, but sometimes we have to get into the right position to receive it.

In the poet Chaucer’s day—that is, 14th-century England—April came with shoots, buds, and singing birds, the air tinged with the sweet breath of zephyr winds. It was then that folks rose from a long winter sleep with thoughts of pilgrimage on their minds. In merry fellowship men and women journeyed to the shrine of Thomas Becket in Canterbury to thank the martyr and seek his continuing protection. On the way the pilgrims told stories and welcomed a stop at the Tabard Inn.

In our day autumn in my part of the country comes with shorter days, diminishing sun, and trees ablaze in one last rage against the dying of the light. It is then that our thoughts turn to football.

Our pilgrimage is to cavernous stadiums, to gladiators in helmets, pads, and cleats, to tailgate parties in parking lots. We may tell stories about records and past glories, but mostly we pack the seats and scream for the home team, urging them on to the sacred place known as the end zone.

A line of grunts called defense determines to stop the opposing line of grunts called offense from entering that end zone. Lined up nose to nose at the goal line, they lay into one another with such push, shove, and bash that soon both sides lie atop each other like so much timber in a log jam.

Then comes that glorious gladiator known as the running back. With the football in an arm lock and legs on instant acceleration, he heaves himself mightily over the heap, an airborne missile flying over the pile. For one glorious instant he defies our mortal gravity and soars, before landing flat on his face in the end zone. In an instant he’s up, jumping for joy, and each teammate leaps and chest-bumps him, and each other, in mid-air. They knock each other silly until the whole place is one glorious resurrection scene in the small swath of green known as the promised land, the end zone of their striving.

A few months later the poet Emily Dickinson comes out of her frozen New England clime with March on the horizon. She assures us that “a little Madness in the Spring! Is wholesome even for the King.” And what form will the insanity take across the land? Why basketball’s March Madness, of course, fit for every king and commoner among us.

The turf in the stadiums is replaced with courts of fine wood with an 18-inch diameter hoop at each end. We pay serious money to see players in brief attire fling a ball through those hoops. Talk about madness!

We cheer the flashy moves, preeminently the dunk, where another airborne missile rises from the foul line, floats to the hoop, and dunks the ball emphatically over the forest of trees known as the defense. More leaping and hip-bumping follow.

There is, however, a play that has no flash and thus goes largely unnoticed. It is called moving without the ball. One player moves with the ball, and that is the point guard, the floor general who largely decides who shoots the ball. The other players are constantly on the move, either setting screens or getting themselves open for a pass. Eighty percent of the time, players move without the ball, making themselves available for a pass. Moving without the ball requires fast feet, open hands, and putting yourself in position to receive.

When I was a child we were taught a curious phrase called “occasion of sin,” putting yourself in a position to sin. This was to be avoided at all cost. There were near occasions, probably those bars we passed on our way to the movies, the ones with steamy windows our mothers told us not to look into, which of course we did. This could be a near occasion of sin. There were also remote occasions, but these seemed to need long-range planning.

At the polar opposite of occasions of sin appear occasions of grace. This requires putting yourself in a position to receive, making yourself available for the coming of God in your life. This the basketball player models.

Raking those autumn leaves is an occasion of grace for me, inspiring gratitude for every summer moment spent under the trees, an awareness of life’s beauty and brevity. Hearing Sarah Brightman sing Pie Jesu or Larry King say he never learned a thing by talking or reading about the men who live under a nearby bridge and doing something about it—these are occasions of grace. The face of a child nuzzling into her mother’s hair at Mass is another, a reminder of who I am, a child in God’s arms.

Occasions of grace are everywhere, from love at the eucharistic table to inspiration on a basketball court. At the end of our earthly pilgrimage there will be high rising and rejoicing, much cheering, maybe a little hip bumping, and for sure a glorious resurrection in the end zone.