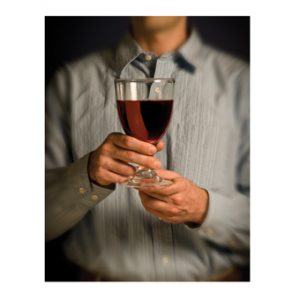 “The eyes have it!” Spelled a bit differently, this phrase is a standard for reporting a positive outcome of a debate. In the act of distributing the Holy Eucharist, it means something different: that there has been a human connection as the true presence of Jesus is being celebrated and distributed.

At the early Sunday Mass where I most often am privileged to be a eucharistic minister, I’ve gotten to know the crowd. People sit in the same place week to week. They grow friendly and comfortable with each other. At Communion time, as I distribute the Eucharist, it has been my effort to engage the eyes of each person as she or he accepts the Body or Blood of Christ.

The eye contact, a byproduct of the hand-to-hand encounter of giving and receiving the sacrament, conveys to each of us that we are in this together, that we are believers. The eyes say “Amen” as much as the voice does.

The eye contact also signals that a relationship is present between the minister and the communicant, perhaps as friends and certainly as part of a believing community of Catholics.

Decades ago, when I was an avid altra boy, it seemed beyond imagination that some day I would be invited to touch the sacred altar vessels, let alone the consecrated host. As the reforms of the Second Vatican Council took hold, members of the laity were encouraged to take on active roles in the celebration of the Eucharist and other parish liturgies. Becoming a eucharistic minister has been among the highest of these callings.

I have come to think that there may be something in the blood about this ministry (pun intended!). Both of my parents, now deceased, my eight siblings and several of their spouses, and my wife and I all have elected to take part in this ministry.

Early in the reform years–and sometimes still today–some of the faithful were hesitant about receiving the Eucharist from the hands of a peer rather than from those of a priest. My father, one of the first to become a Communion minister in our parish, liked to offer a parable about this concern.

“Suppose the president of a bank called you and told you that he had a $10,000 gift check to give you,” he posed. “All you had to do was come to the bank to receive it. You presented yourself at the bank office, and the night watchman, not the president, came out with your check. Would you value it any less because the president had not delivered it himself?”

Two changes in my parish, both to my liking, have come about since I was first commissioned in this ministry in 1985. One change is the active inclusion of younger people, including those in high school, and of older people, too. It has been wonderful to witness teens who are eager to express their devotion to the sacrament, especially at school liturgies. Many older Catholics have embraced the ministry of bringing Communion to the sick, joining their eucharistic service to their ministry of care for the ill and homebound.

Another change is the reduction of ceremony to the role of eucharistic minister. For years we used to be part of the opening procession and sit in the front pew away from our families. Now we blend in, conveying the useful message to all that we are just like everyone else–and that everyone else here might want to think about sharing this ministry.

Each member of the believing community should certainly feel invited to take on some such active role in parish liturgy in addition to our common duty of actively participating at Mass.

One more suprise is the team spirit that has developed among the usual cadre at our Sunday Mass. People appear reliably. No one fusses about whether he is distributing the Body or the Blood or which station is her lot for that day. All hands collaborate for the washing of the vessels after Mass. Our Mass captain, Bob, is a model of a humble servant, doing whatever is needed, yet eager and willing to teach others what to do rather than hoarding tasks.

We each have had the compliment of being asked to serve as eucharistic ministers at funerals and holiday liturgies, where often a commissioned husband, wife, and sometimes an adolescent in the family are invited together to this privileged position of service.

The way the assembly receives our ministry convinces me that, indeed, both the “eyes” and the “ayes” have it when it comes to laypeople’s service at the Lord’s table.

Joseph Walsh is a professor of social work and a deacon at Ascension Church in Oak Park, Illinois.

From Mary to Jill: Titles matter