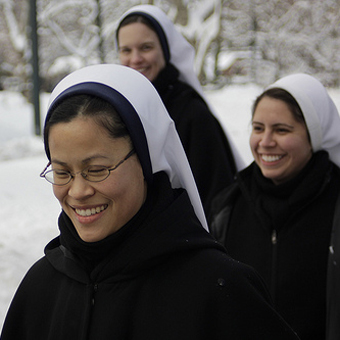 Around the time Karen Lueck entered the Franciscan Sisters of Perpetual Adoration in 1967, the community had decided to forgo its traditional habit. “Many people who had worn the habit were glad to get out of it,” she says. “They felt it kept them on a pedestal, apart from the people.”

The order reconsidered the issue several times during the 1970s and eventually reached a compromise: A few sisters chose to wear a modified habit, and the vast majority—including Lueck—opted for simple, professional clothing. (All sisters wear the order’s medal and ring.)

But then almost three decades later, the habit question surfaced again—this time from Julia Walsh, the youngest member of the community, who joined in 2006 when she was 24.

“It’s a sensitive topic,” acknowledges Walsh, who teaches religion courses at Hales Franciscan High School in Chicago. “Some older sisters have a lot of pain about it. But it was important to me to ask if we could create room for members who want to wear a veil and habit to do so.”

“I said to someone, ‘Whoever would have thought we’d have to deal with this issue again?’ ” says Lueck. But as the community’s co-minister of incorporation, she worked closely with younger, newer members, and she knew she and the rest of the community “needed to listen to where this was coming from.”

About 30 sisters took part in a listening session in the motherhouse in La Crosse, Wisconsin, and they learned that visibility is a key consideration for Walsh and her fellow millennials. “I’ve chosen to be a sister because it’s countercultural and it’s a prophetic form of witness to the gospel,” says Walsh. While she primarily wants to be identified by her service and love, she wants more: “I want people who don’t know me to know I’m a sister, to gain some joy from knowing that young women religious exist.” (She’s in good company: Among the few young women choosing religious life today, the most popular orders are those that wear a habit.)

Sisters at the meeting concluded that the congregation’s constitution doesn’t say a member can’t wear religious garb. Buoyed by the discussion, Walsh headed out to Goodwill and “bought a bunch of brown clothes” in order to cultivate a more traditionally Franciscan appearance. She would still like to have a veil.

The handling of the habit issue was emblematic of how this community aims to deal with issues that potentially divide along generational lines. “It’s a lot of work—we have to communicate clearly and not make assumptions and remain loving in the midst of it all,” says Walsh. “We have a lot of good, honest discussion about our different perspectives and experiences.”

“The community was willing to talk about it, and that was huge,” says Lueck, who heard from a few sisters in other congregations that the FSPAs were “brave” to address the topic. Lueck acknowledges that it wasn’t easy. At one point she overheard an exasperated member say that younger sisters would eventually outgrow the desire to don the habit. Others were worried that restoring the habit would symbolize rolling back the clock.

“It’s not about taking us back,” says Lueck, who emphasizes that for millennials, seemingly “conservative” preferences for religious garb and eucharistic adoration co-exist with seemingly “progressive” ideas on social justice and community.

“Their ways of looking at things are very different. They’re having us ask questions maybe we haven’t asked ourselves in a while. Each generation loses some important things, depending upon what their focus has been. We need to be renewed by the next generation.”