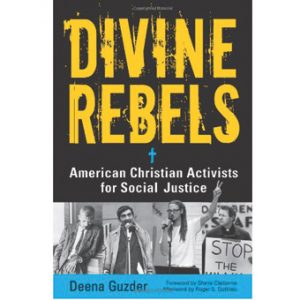 In her collection of profiles, Divine Rebels, Deena Guzder seeks to dispel the assumption that religion causes nothing but problems in modern society.

A non-Christian herself, Guzder once saw only the negative effects of religion, for her embodied in the Religious Right, fundamentalism, and church hierarchy. In response, she decided to profile Christians who have been compelled by their faith to struggle against poverty, war, racism, the death penalty, and nuclear weapons. For each activist belief in a loving God is essential for doing this difficult work.

Guzder’s profiles include Jim Zwerg, who struggled with the tenets of nonviolence but eventually had the courage to face death during the 1961 Freedom Rides, and Maryknoll priest Roy Bourgeois, who went from wanting to fight communism as a soldier in Vietnam to starting one of the largest annual peace protests against the School of Americas military academy. Jim Corbett started a national campaign to provide sanctuary to Central American refugees after he saw what was happening to the detained refugees in his community.

Some just fell into the social justice work. Charlotte Keys got involved in ecojustice after a chemical explosion in her town, and SueZann Bosler started speaking against the death penalty after her father was murdered. No one was born an activist, and Guzder details each person’s transformation and the difficulty of this lifestyle.

Most of the individuals featured are Catholic or members of the historic peace churches, such as Mennonites and Quakers. A second installment or a revised edition of the book ought to feature leaders from non-Christian faiths, along with more women.

At the same time the book is the perfect blend of inspiration and challenging social commentary. Readers will be motivated to join the featured activists on the front lines of the work for social justice and peace.

Kristin Peterson is a writer from Oak Park, Illinois.