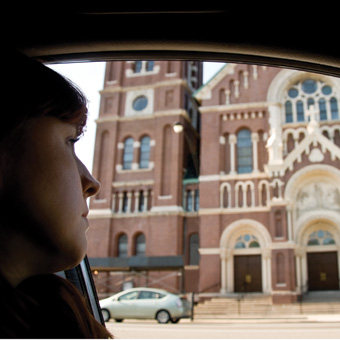 People leave the Catholic Church for a host of reasons, but exactly what brings them back?

For many Catholics it is a Sunday routine, but for Laura Bendini, going back to church on Sunday was extremely intimidating. For the first two weeks she didn’t even make it inside. She couldn’t find parking outside of St. Charles Borromeo Church in Arlington, Virginia, so she just went home, somewhat relieved. When she did make it inside she snuck up to the balcony and stood in the back, behind all the families with squirming and squealing kids.

Bendini didn’t remember when to sit, stand, or kneel, and she stood in silence as everyone else recited the creed. She had been baptized Catholic and received her First Communion, but hadn’t gone to church much since then. Now in her 30s, she felt called back to the church.

Bendini may not have returned had she not discovered Landings, a small-group program for returning Catholics. Landings offered her a community of support-a place where she could express her concerns, ask questions, and learn about the Catholic faith. After going through Landings in the fall, she is now enrolled in RCIA and a team leader for the next Landings session.

“It would have been hard to stick with the Mass without Landings,” Bendini explains. “I was barely there and barely going to come back if it weren’t for people constantly reaching out to me in a nonjudgmental way.”
Bendini may have felt alone on that Sunday when she stepped back into a church, but she was not alone in being away from the church. Most Americans who identify as Catholic do not regularly attend Mass, according to a 2008 study of the Center for Applied Research in the Apostolate (CARA).

The challenge in trying to reach out to this group of Catholics is that there are so many different reasons why people are not active in the church. Some just get busy and stop attending church regularly, whereas others have deep hurt and anger that keep them away.

With so many reasons for Catholics to leave the church, Lorie Duquin of Williamsville, New York explains that parishes can’t just use a one-size-fits-all approach to evangelization. Through her involvement in evangelization programs in the Diocese of Buffalo, Duquin has identified three categories of Catholics who aren’t at church: inactive Catholics, those who are registered at a parish but don’t go to Mass regularly; alienated Catholics, those who do not attend church and feel unwanted in some way; and the unchurched, baptized Catholics, who did not grow up as actively involved in their parish. Throughout the country, different programs are used to try to reach these Catholics and welcome them back.

Caught in the drift

Padraig Burns of Arlington, Virginia grew up in a traditional Catholic family, but he had a difficult time transitioning from the college environment into a parish. He went “church shopping” to find a place where he felt at home.

“I kept going to church, but after a while I thought, ‘Why even bother going?’ I didn’t feel like I was getting anything out of it,” Burns says. “I never really left the church. I just became inactive.”

After being inactive for about a decade, Burns finally found St. Charles Borromeo in Arlington, where he, like Bendini, went through the Landings program and became an active member.

Bendini and Burns’ experience is similar to that of a lot of Catholics. The CARA study about Catholics’ involvement in the sacraments found that 56 percent of self-identified Catholics only attend church a few times a year or they don’t attend at all.

Mark Gray, director of CARA Catholic Polls and one of the authors of this study, explains that Catholics who attend Mass once or twice a month said that they missed Mass mostly because of a busy schedule, family responsibilities, or health problems. Catholics who only attend Mass a few times a year mostly said they don’t believe that missing Mass is a sin.

Gray notes that even though these Catholics are not attending Mass, they still self-identify as Catholic and pray, fast during Lent, get ashes on Ash Wednesday, wear religious jewelry, or have religious icons at home. “It is hard to say that these people have fallen away,” Gray says.

Similar results were found when the Diocese of Phoenix ran the first Catholics Come Home program during Lent 2008. Statistics showed that about 90 percent of returners could not identify why they had left. “For the vast majority that returned to the church, the disconnect wasn’t as a result of a disagreement in doctrine,” explains Ryan Hanning, coordinator of adult evangelization for the Phoenix diocese.

The majority (71 percent) of Catholics who had left told the Pew Forum on Religion and Public Life in a 2009 survey that they drifted away, but many also listed unhappiness about church teachings on remarriage, divorce, the role of women, homosexuality, and abortion as reasons they left.

Gray believes that the biggest myth is that Catholics are leaving the church out of anger. “It is hard to find in any of these surveys a large reservoir of anger that is causing people to leave the church,” Gray says.

Jeanne Waliczek of Orland Park, Illinois left the church out of apathy. “After I was confirmed, I thought, ‘Good, now I don’t have to do this anymore,’ ” she explains. “I became agnostic. I didn’t think that God cared about me, and I didn’t care about God.”

Later in life Jeanne was going through a difficult divorce and decided to start attending a Protestant church, which she found more welcoming. “I thought the Catholic Church was like a country club-if you weren’t a member, then you weren’t invited.”

She met her current husband, Tom, about 10 years ago and they were married in a Protestant church. Tom had left the Catholic Church when he was a young man. “I thought I was never going to live up to the life the church wanted me to,” he says.

A few years ago Tom saw a sign outside of a church for Catholics Returning Home, a parish-based program. He thought he would give it a try. Jeanne initially resisted the idea of returning to a church that she found to be so cold.

“I didn’t want to come back,” she says. “But I came to the realization that you can throw stones from the outside or you can come back and be on the inside and be part of the change.”

Now as leaders for the Catholics Returning Home program, the couple can relate to the emotions that people feel as they come back to the church. And despite the Pew findings, there is still plenty of anger among some returning Catholics.

“Anger is very prominent with people who have been gone a long time,” Jeanne says. “As leaders of the groups, we need to display love, understanding, and acceptance of the anger.”

Many of the traditional methods of reaching out to inactive Catholics use language such as “come home” and “welcome back.” But these approaches will not be as successful when trying to reach out to younger generations of Catholics, according to Paulist Father Frank DeSiano, president of the Paulist National Catholic Evangelization Association (PNCEA).

“There is a new paradigm of inactive Catholics. The old paradigm was the angry, marginalized, anti-church, very sensitive person, but they grew up with a strong Catholic identity,” DeSiano explains. “People under 40 grew up with the idea that you can construct your own identity; it is not something that is handed down.”

Young adults of this generation are more likely to experiment with their lives, try different types of spirituality, and question everything before they settle down with a family, career, and spiritual community. They might not even see the church as home, DeSiano says.

DeSiano believes that the best way to put younger generations in touch with their faith is by connecting them with smaller groups of Catholics with the goal of leading to involvement in the larger church community. This theory is the basis for Awakening Faith, a six-session, small-group program that DeSiano helped start through PNCEA.

Since most Catholics are not sitting in a pew on Sunday morning, the Catholics Come Home TV ad campaign is attempting to reach Catholics in their homes. The campaign, which features a series of three commercials and an interactive website, has been run in more than a dozen dioceses throughout the country, including Phoenix, Chicago, Sacramento, and Dallas. The founder and president of Catholics Come Home, Inc., Tom Peterson, hopes to have the ads air on major U.S. networks in the near future.

Each of the ads, which can also be viewed online, has a different focus and approach, highlighting the positive 2,000-year history of the church, the call to repentance, and the testimonials from Catholics who have left and come back to the church.

The Diocese of Phoenix saw an increase of around 90,000 people after the commercials ran in 2008. Hanning said that parishes are trying to maintain and increase those numbers at church through door-to-door evangelization efforts and by offering adult faith formation programs and retreats.

Because Phoenix served as a pilot site for the program, the diocese did not incur any costs, but other dioceses have to pay high prices to air the ads on local networks. The Illinois dioceses of Joliet, Rockford, and Chicago, for example, paid a combined $1.3 million to run the campaign this past Advent.

But Hanning feels that it’s worth its cost. “This campaign spoke not only to inactive Catholics but also to active Catholics. There are few campaigns that can do both.”

Not all agree. Angela Keane of Denver has been away from the church for most of her adult life. She thought the commercials appealed to people’s emotions, but they didn’t address the issues that she has with the church.

And she found the accompanying website to be well organized but out of touch. “The website is portraying a church that doesn’t want to see the church the way that it really is,” she says. “There is nothing for people who are looking for spirituality outside the rules of the church.”

In response to the Catholics Come Home ads that aired in Chicago, St. Clement Church planned several initiatives. They placed a welcome brochure in all the pews during the Christmas liturgies, and Catholics Come Home signs were placed around the church.

Christina Bax, the pastoral associate and director of evangelization, explains that the parish planned a listening session for alienated or hurt Catholics and a question-and-answer night.

The latter brought in about 20 people, including involved parishioners, less active Catholics, and even some non-Catholics. Questions ranged from why other Christians can’t receive Eucharist in a Catholic church to issues of sexuality to the ordination of women.

The welcome sessions for returning Catholics brought in a handful of people, but Bax believes that the sessions had a big impact on those who came. She has since seen several of the participants in church on Sunday.

Bax has only heard of a few people who have come back to the church because of the campaign. “I think it is affecting people, but they are more likely to just slip into the back of Mass than to identify themselves,” she explains.

Despite not knowing how people have been affected by the ads, Bax has been focusing on the individuals who have returned. “Even if we get a handful of people who return, and it makes a difference in their faith, then it is all worth it.”

Kristin Peterson is a writer from Oak Park, Illinois. 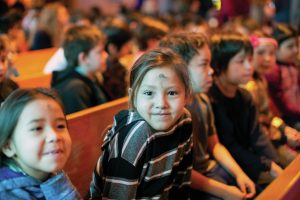 Is the Vatican built on St. Peter’s bones?