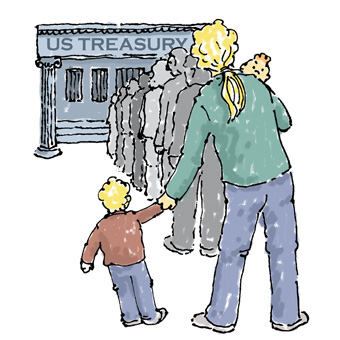 Would we so willingly cut programs for the poor if we knew them by name?

When I was in high school, I bagged groceries for my pocket money, and I often saw a WIC tag next to food items as I restocked shelves: peanut butter, milk, cheese. As a middle-class 16-year-old who never missed a meal, I didn’t even know what WIC stood for (“Women, Infants, and Children”) or that it provided free food to pregnant and nursing mothers and their infants and young children, until my mother told me that it started when she was pregnant with me.

Twenty years later, that memory came back to me as I saw flashing across the screen on CNN: “$500 million, WIC; $600 million, community health centers.” The ticker was rolling the line items of the $38 billion in spending cuts approved by Congress in April and signed by President Obama to avert a government shutdown. A piece in The Nation highlighted the on-the-ground impact of these kinds of cuts: In House Speaker John Boehner’s district alone, where child poverty rose six points to 19 percent in 2009, 500 poor seniors will no longer get a monthly food box.

As I considered the damage to our social safety net, I couldn’t stop asking myself: What kind of country balances its budget by taking milk from children or peanut butter from their mothers? Or cuts health programs for uninsured people? Is that the same country that in just a few weeks dropped $750 million worth of bombs on Libya and this year will spend more than $700 billion on “defense”? It seems we have to justify every penny spent on feeding the poor, but if we’re bombing someone, it’s carte blanche.

Soon after the cuts passed, the bishops who chair the domestic and international policy committees of the U.S. bishops’ conference and the heads of Catholic Relief Services and Catholic Charities joined Christian leaders in calling for a “circle of protection” around the portion of the federal budget devoted to social services. The bishops followed up with a letter to the Senate from the two bishops’ committees urging senators to keep poor and working families high on their agenda. In May Catholic theologians and scholars sent a letter to Speaker Boehner on the eve of his appearance at the Catholic University of America decrying the “anti-life implications of this budget in regard to its impact on poor and vulnerable American citizens.”

Such responses from high-level Catholics are well and good, but what about white, middle-class Catholics (me included), only two generations removed from the same poverty suffered by millions in our nation today?

There was a time when most U.S. Catholics knew someone who was poor; it was hard to live in an urban Catholic ghetto and not know someone in need. But I doubt that is as true now as a generation ago. How many of us have friends who are poor? I don’t. Do our children know their children?

There is still poverty in the Catholic community, but a Catholic could probably attend the same suburban parish every Sunday for years and never encounter anything like the poverty of inner-city Los Angeles or rural Mississippi. Catholics still live in ghettos, only now they separate us from each other.

Middle-class Catholics send money, donate food, and attend fundraisers to support the corporal works of mercy, but such charity-from-a-distance isn’t enough; face time with the down-and-out has to be part of the mix. Poor people must become more than empty hands that we fill out of kindness or even guilt. We must know them as real people with stories that are not unlike our own, whose lives, through a combination of racism, lack of resources, unstable families, bad luck, and sometimes bad choices, turned out much differently. There but for the grace of God go we all.

The coming months will be dominated by fiscal battles over the federal debt limit, entitlement programs, and military spending. These are, of course, important political questions that our nation must solve.

But for us who are also citizens of a city yet to come and members of Christ’s mystical body, they are also spiritual matters. What we do to the least of our brothers and sisters—or permit to be done to them—we do to Christ. Getting to know hungry, thirsty, naked, sick, and imprisoned people might be a first step in doing right by them, especially if we want to inherit with the poor the kingdom promised “when the Son of Man comes in his glory” (Matt. 25).