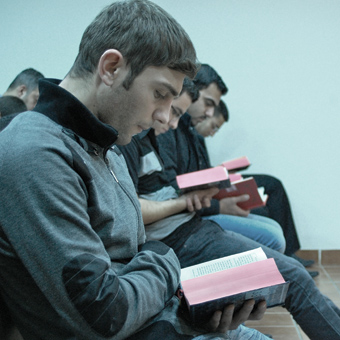 Iraqi Catholics risk their lives to join the priesthood and serve their own in a turbulent state.

Father Daud Barber of the College of St. Ephram in Qaraqosh, Iraq once traveled to Egypt, Syria, and Germany to study music and play the oud, an ancient stringed instrument. He performed with the symphony in Lebanon, he recounts, his coal-colored eyes brightening at the memory.

But Barber, who grew up in the Nineveh Plains of Iraq, eventually returned home to teach music at St. Ephrem, a Syrian Catholic seminary named for the fourth-century Turkish saint who wrote hymns and poetic sermons. The seminary is located near Mosul, one of the most dangerous cities in Iraq, particularly for Christians.

“I can’t live there,” Barber says of Lebanon, shaking his cropped hair, the wiry ends tinted gray. “I needed something here. It’s something spiritual. Iraqis are different. We are part of this earth. We want to stay in Iraq.”

In the years since U.S. forces toppled Saddam Hussein’s regime, hundreds of thousands of Christian families have fled Baghdad, Mosul, and Basra, the three largest Christian communities in Iraq, seeking refuge in the Kurdistan region of Iraq and in neighboring Middle Eastern countries, primarily Syria, Jordan, and Lebanon.

Saddam Hussein’s deputy prime minister, Tariq Aziz, was a Chaldean Catholic, and Christians were mostly protected under Saddam’s regime. Since 2003 the new Iraqi government generally has not persecuted any religious group. Leaders make public statements in support of the country’s religious minorities and offer extra security at places of worship.

But it has been unable to control the violence. On October 31, 2010 more than 50 people were killed when insurgents seized a crowded Sunday service at Our Lady of Salvation Church in the Karada neighborhood of Baghdad. The church had also been bombed in 2004.

But even with Iraq’s displaced Christians, something remarkable is happening. The number of men entering the Catholic seminaries in Iraq is up, even as the populations that would produce the priests are dwindling.

“There’s not anything to stop priests,” Barber says. “Besides, in all of Iraq Christians still want to be married, they want to be baptized, they want to pray. All of the sacraments are important to stay with God. Because of that, we must be priests to serve our people.”

“We can’t tell them they will be safe,” says Fadi Lion Nissan, rector of St. Peter’s. “Nobody can give you a guarantee.”

And yet they come.

A small voice for peace

It was evening in Erbil, the sun tucked in, and about 20 young men gathered in a small room on the third floor of the main building at St. Peter’s, chanting in unison, a ritual at the close of every day. A white cloth covered a table on metal legs at the front of the room, where a picture of Jesus hung on the wall. The winter chill crept in through the darkened windows.

The young men wore the clothes of typical Iraqi youth: distressed jeans, pointed shoes, sweaters with patches on the elbows. And yet their melodic voices chorused in Syriac, an ancient dialect of Middle Aramaic, the language of Jesus.

The newly constructed seminary is home to 26 young men training to be priests. Nine are first-year seminarians. It was located in the Dora neighborhood of Baghdad from 1962 to 2003 before moving to a temporary building in Ainkawa, a Christian suburb of Erbil, the government center of the semi-autonomous Kurdistan region, which has become a safe-haven for Christians fleeing from violence elsewhere in Iraq.

The region’s government has encouraged Iraq’s Christians to move into its communities and has sought to incorporate Christian enclaves into its boundaries, though the Kurds’ tolerance is complicated by political motives. By increasing its geography and its population, the Kurdistan region stands to gain in its quest to control more of northern Iraq, and Christians still struggle with unemployment there.

But politics is not part of the curriculum at St. Peter’s. Nissan, the rector, recently returned from an ordination in Baghdad, where three students became deacons. He left filled with hope.

“Sometimes we feel that God has left us, especially us Christians,” he says. “We feel God talks in a different way. You are a little community in this land. One day, you will be a small voice for peace in this land. For me it’s hope.”

Seminarians spend six years training to become priests. Most do their initial studies in Iraq, but because of a shortage of experienced theologians, they do their advanced training in Rome, Lebanon, the United States, and Canada. Some don’t return.

Georges Casmoussa, the archbishop of the Syrian Catholic Church in Mosul, acknowledges that some of the young men use the seminary for a chance to go abroad and then immigrate, never intending to remain in Iraq to serve their communities. The priests who leave don’t necessarily go to minister to refugee flocks. He hopes, however, that the majority of seminarians won’t use the opportunity to leave. “It is not easy,” he says. “We trust them to return.”

“We don’t ask young people why they want to be priests,” Casmoussa says. “But faith is very deep here. It is a great thing for us to have young people connected to the church.”

Casmoussa was kidnapped in 2005 and released the next day. In 2008 the Chaldean Catholic Archbishop of Mosul, Paulos Faraj Rahho, was kidnapped and murdered by Al Qaeda in Iraq.

“I think that many Christian young men, not unlike their Muslim peers, see their faith community under siege,” says Michael La Civita, vice president of communications for the Catholic Near East Welfare Association (CNEWA). “Rallying to the cause, they are enlisting to defend it, to advocate for its survival, to make way for the Lord and his message of peace and justice.”

Seminarian Fadi George remembers when he first told his family in Baghdad that he wanted to become a priest. His parents were frightened and tried to talk him out of it.

But George, who is in his first year of studies, says he wants to lead the church even if under attack. “The church needs someone like me in this place,” he says. “The priests do something that no one else can do. This is the way I chose, and I will continue this way.”

George describes his calling as “something I feel inside. It is invisible.” He ultimately was able to earn his family’s support, even respect.

Tariq Bassam, who is from Mosul, says he always knew he wanted to be a priest, even when he was a small child. The oldest child of five and the only son, Bassam knew his decision would be hard on his parents. “But I am free,” he says. “They supported me.”

Three years ago if a Syrian Catholic wanted to join the priesthood, he would have gone to seminary in Mosul rather than Qaraqosh. Mosul is an ancient city and a historic center for the Syrian church. Jonah and other Old Testament prophets are believed to be buried here.

Today Mosul is an extremely dangerous, nearly lawless place, with elements of Al Qaeda struggling for control with former elements of Saddam’s regime. Christian families say they have been attacked by neighbors influenced by Al Qaeda.

In 2008 the situation for Iraq’s Christians in Mosul was so bad that many fled to St. Matthew’s Monastery in the mountains, about 20 miles outside of the city. Frightened families packed into empty classrooms and rooms used by the monks.

“Only a politically stable Iraq will win back these refugees,” La Civita of CNEWA says. “In fact, only a politically stable Middle East, where the rights of all are respected, will win back not just the Christian minority, but the large number of well-educated Muslims who have also fled. . . . The moderates are leaving the region, leaving behind only extremists to battle it out.”

According to CNEWA, about 10 percent of the about 1.5 million Iraqis who have fled to Syria are Christian, though Christians make up less than 3 percent of the Iraqi population overall. Up to 500,000 Iraqi refugees have settled in Jordan, CNEWA reports. Pastoral and humanitarian workers believe that there are about 50,000 Christians at any time in the country. In Lebanon, it is believed that about a quarter of the 40,000 Iraqis living in the slums of Beirut are Christian.

“Violence drives these families from their homes,” La Civita says. “Every refugee we have interviewed tells stories of threats of kidnapping, extortion, bribery, murder directed at either them or members of their families.”

“It’s a big problem,” says Archbishop Casmoussa. “We are losing our communities. There were Jews here before there were Christians before there [were Muslims]. We are all Iraqi. But I am a second-class citizen because I am a Christian. But when you are in the ministry, you can’t think about that.”

In search of harmony

Barber’s voice fills with emotion talking about the Christians who have fled the violence in Iraq, his lilting Arabic barely a whisper against the rustling winter wind. The music teacher at St. Ephram knows in his heart that the Christians would not have wanted to leave. They would have stayed until the last possible moment for their children, he says. They would have stayed even as churches were bombed, their fellow parishioners kidnapped, their priests murdered.

Barber has a hard time reconciling the Iraq he knows with the Iraqi who would want to harm him. “If any Iraqi is hurt, someone will stop to help him and not ask who he is, even if they will kill him for helping,” Barber says. “When you eat in Iraq, it tastes different here. There is harmony here. The spring is harmony. Everywhere else the people are like robots. How can I leave this place? This is our country.”

Seminarian Marcel Habbish, who is from Qaraqosh, can stay inside the protected limits of the new Syrian seminary, guarded by Iraqi security forces at checkpoints to the entrances to the city. The guards inspect every individual and car, although it has not been foolproof.

Still, Habbish says he is not afraid. “If Jesus is with us, there is nothing against us,” he says. “Whether anything happens in Iraq, even bombings, it cannot stop us from answering when Jesus calls us to serve.”

Jackie Spinner is a journalist based in the Middle East. She was a staff writer for The Washington Post for 14 years and covered the wars in Iraq and Afghanistan.

True charity calls for more than a parish toy drive 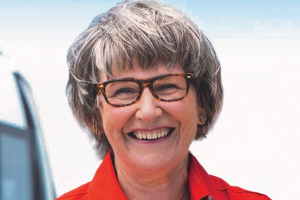