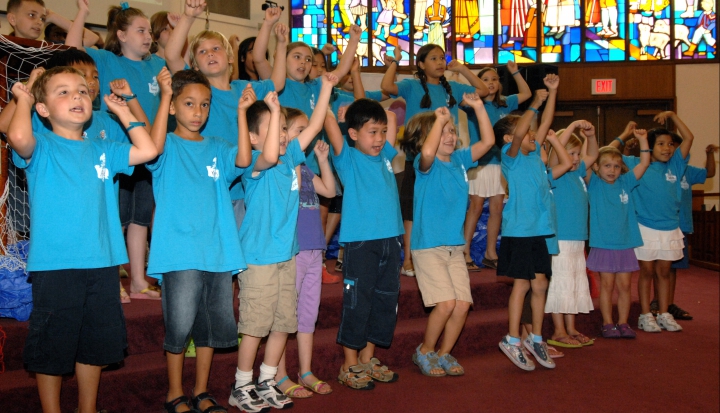 Editors' note: Sounding Board is one person’s take on a many-sided subject and does not necessarily reflect the opinions of U.S. Catholic, its editors, or the Claretians.

…for Vacation Bible School told me so. When school’s out for the summer, the real learning begins—from the Baptists.

I grew up in the One True Church: Holy Ghost Catholic Church in Knoxville, Tennessee, with Father Albert Henkel as my pastor. If you asked Father Henkel, all other churches were merely progressively lesser copies of the One True Church at Hinton Street and Central Avenue—beginning with Immaculate Conception about a mile and a half away, which, after all, was staffed by Paulists. The Baptists, Methodists, and other assorted Protestants were a further distance still.

Everyone who went to Holy Ghost agreed with Father Henkel that we went to the One True Church, but when summer came—despite the obvious danger to our souls— our good Catholic mothers still sent us to lesser churches for the religious equivalent of summer camp: Vacation Bible School, usually referred to simply as VBS. And it wasn’t run by those zany Paulists at Immaculate Conception.

Every Protestant church in town had a VBS. My favorite was at Beaverbrook Baptist Church (best cookies and punch), but the Methodists and Presbyterians could stage a mean Bible camp themselves. And even though not a single one of them was held at a Catholic parish, I count those summer weeks as among the most important in my religious formation. In fact, I think every Catholic kid should go to VBS at least once in her life.

I will admit that my mom probably wasn’t sending me to VBS for my spiritual health; it was, after all, a relatively inexpensive way to gain a summer week’s worth of morning sanity, and a little extra church never hurts.

Where else could a Catholic kid learn things like the Pledge to the Christian Flag and the Pledge to the Bible? (I hadn’t even known there was a Christian flag.) These were always included in the morning chapel service at Beaverbrook, along with a collection. (Southern Baptists start tithing early.)

I can hear Catholic parents objecting now: Baptists don’t believe the same things as we do. My mom was well aware of that, which is why she told me every morning to say I was saved if asked (since I was when I was baptized, she said), and not to go down to the altar if they invited people to do so, which only happened once anyway.

Besides, comparing differences is a great way to learn, and if a Catholic goes to a Baptist Bible school, he’s bound to experience differences. I came home almost every day with a new question for my parents, and I think they had to do a little brushing up on their own grasp of the faith to answer.

Thanks to VBS, from the time I was 7 years old I could explain to my Baptist friends that we Catholics don’t worship Mary, we honor her, and that statues are just helpful reminders of the saints, not the “graven images” forbidden by the Ten Commandments.

What about the pope’s funny hat? It’s called a miter, I quickly learned to explain, and bishops have been wearing them for a long time. I even had a good answer for the “Are you saved?” question: “I hope so!” I used that one all the way through college, always with a smile.

To be honest, I think I learned a lot more from the Baptists than they learned from me. For one thing, no Catholic teacher of mine ever asked me to memorize a passage from scripture, but my VBS teacher at Smithwood Baptist Church expected us to learn five “memory verses” every day for a week—all really good ones, too, mostly from St. Paul.

I also had to learn the difference between major and minor Old Testament prophets (and put them all in proper order), how many books were in both Testaments (which meant I learned about our extra “Catholic” books, too), and all the letters of Paul. We got a special treat if we could name all the books of the Bible—in order. (I could.)

But I learned more than the contents of the Bible: If you know any evangelicals very well—and regardless of denomination, all these folks were garden-variety, biblical fundamentalist, born-again Christians—you know they speak very freely and easily about their “personal relationship” with Jesus. And for a Catholic kid accustomed to a more formal language for the human-divine relationship, it was an encouragement to think of God as someone who was really a part of my everyday life, someone who was interested in me individually, and who wanted me to be happy.

What’s more, these Christians were happy to tell you how God was at work in their lives and were completely comfortable making up prayers all on their own.

That’s not to say that there wasn’t some difficulty involved. I remember getting the distinct impression that some of the teachers especially were just a little worried about my salvation, and as I got older, many of the kids wondered why I wasn’t saved the way they were, which always included an intense emotional experience and often tears. At the same time, they couldn’t deny that I had faith, too—especially when the Catholic boy whipped all the kids at Bible Baseball.

But even their concern for my salvation was a sign of love: They really believed they were going to heaven, and they wanted me to go there, too. They just weren’t exactly sure a Catholic could pull it off. One kid, when I was in high school and not at VBS, told me that if I stood up at the Second Coming and told Jesus I wanted to be a Baptist, that would probably be OK.

Even if they weren’t sure about my final destination, eternally speaking, they never made me feel unwelcome—in fact quite the opposite. One Monday of Bible school week, my teenage counselor, aware of my religious shortcomings, snuck me a dollar for the collection plate before it came around. She could see all the other kids had their dimes and nickels ready, while I was empty-handed, and she wanted to make sure I didn’t feel left out or embarrassed. It was a kindness I still remember vividly 30 years later.

My summer vacations with the evangelicals kept paying dividends even when I aged out of VBS. Because I could speak their language, I always had friends across denominational boundaries, which meant that, even as many of my peers were less and less interested in church, I still had some who took their faith seriously.

Even their struggles helped me deepen my own Catholicism. Though the hard certainty of my evangelical friends was sometimes attractive, I also witnessed some of them fall apart when this or that element of their faith—their understanding of a passage of scripture, for example—got undermined by doubt.

Catholicism, on the other hand, seemed broad and flexible enough to withstand a certain amount of questioning, and I never really experienced the profound uncertainty many of my friends eventually did.

I felt this most poignantly as a camp counselor one summer (not a religious camp), when another counselor, who was Jewish, asked me to talk to one of his charges. The born-again teen, recently saved, had been sobbing for hours because his girlfriend was not, and he believed (mistakenly, it turns out) that the world was going to end around Labor Day that summer.

While I thought such a belief was completely crazy, I couldn’t tell him that. I could call upon my evangelical vacations to talk sincerely about God’s grace as one believer to another, to read the Bible with him for some hopeful passages, and to talk about how maybe God was at work in his girlfriend’s life, guiding her in ways he wasn’t able to see.

That moment summed up the gift that my mom inadvertently gave me when she sent me to VBS: an appreciation for the gifts of another brand of Christianity, an even greater appreciation of and curiosity about my own Catholic faith, and, above all, the ability to recognize a fellow disciple of Jesus, if one on a slightly different path.

So if there’s a VBS in your neighborhood, go ahead, sign your kid up. You may be surprised by what she (and you) might learn.

"And the survey says…"

1. I have/would send my kids to another denomination’s religious camp or program.

2. I attended church/Sunday school/Vacation Bible School of another denomination as a child.

3. I think children are too young to be exposed to other forms of Christian faith.

4. I worry that born-again Christians would want to “convert” a Catholic child at VBS.

Representative of “other”:
“I would expect it but not worry about it, so I would prepare my child for the ‘Have you been saved?’ question.”

5. Catholics can benefit spiritually from friendships with evangelical Christians.

6. Catholic youth should participate in some program that increases their familiarity with the Bible, even if that means going to VBS at another church.

7. Catholic parishes should start their own version of VBS.

Representative of “other”:
“I assumed that Catholics everywhere had gotten on the VBS bandwagon like they have in my neck of the woods. I’ve been involved with VBS in my own parish for about 10 years. At least one publisher of ‘canned’ VBS has a ‘Catholic’ version. It’s pretty much the regular program with some side notes referring to the Catechism or church teaching.”