Of Gods and Men
Directed by Xavier Beauvois (Why Not Productions, 2011) 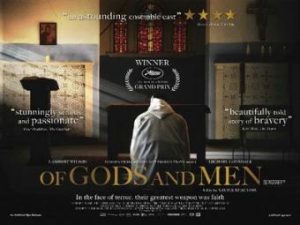 While accepting an award for his film, the French director of “Of Gods and Men” said, “I don’t want people to say bad things about Muslims in [France’s] upcoming electoral campaign. I want us to be together with them—that’s the lesson of this film.”

The movie, based on the true story of French monks murdered in Algeria in 1996 despite being warned to flee before Islamist militants’ violence caught up with them, shows the monks woven into the fabric of their Muslim town, attending family celebrations and running a clinic for villagers.

When violence against foreigners erupts, the government tries to force them to leave. The prior of the monastery refuses, but the monks are definitely not of one mind: “I didn’t come here to commit collective suicide,” says one. “The Good Shepherd does not abandon his flock to the wolves,” says another. They agree to wait for a while. Meanwhile, the monks spend hours each day chanting in their small chapel, words you realize cannot but work on their souls: “Let us turn to the Man of Sorrows who beckons from the cross. Let us not forgo the blood he shed.”

I suspect the movie does an admirable job of showing how monks really live: working, praying, taking walks, observing periods of silence. A friend says his college-aged son found this portrayal of monastery life as eye-opening as the terrible choice the monks find themselves faced with.

“You are the protection for the village,” says one of the townsfolk. When one of the monks replies, “We’re like birds on a branch—we don’t know if we’ll be leaving,” a Muslim woman looks them straight in the eye and says, “We’re the birds. You’re the branch.”

This beautiful, stirring film contains a remarkable Last Supper sequence which takes place after the monks have finished wrestling with their decision. Wordless, they laugh and weep together, much as we imagine the disciples and the Man of Sorrows might have done on that Thursday, in the face of the violence bearing down on them.