When building a new church, parishes can look to former churches for resources.

As Catholic demographics shift and shrinking budgets demand consolidation, churches close. Because canon law prohibits the sale of sacred objects—such as crucifixes, chalices, and Stations of the Cross—and calls for their disposal only if they are damaged beyond repair, several archdioceses are cataloging, warehousing, and finding new homes for these artifacts. This can be a boon to parishes that are building on budgets—if the objects are in good condition and fit the new church’s iconographic and structural needs.

Twenty years ago, the Archdiocese of Philadelphia created the Ecclesiastical Exchange Program, one of the first in the nation, to steward the transition of sacred objects from their original locations. “The priority is to place objects first in parishes within the archdiocese, but we have worked with churches throughout the country,” program director Father Zachary Navit says.

Three altars and many furnishings at St. Bede the Venerable in Holland, Pennsylvania originally graced Philadelphia’s Most Blessed Sacrament (MBS), a church with a long history that once had the largest Catholic grade school in the United States. St. Bede invited former MBS parishioners to visit and see how objects from their beloved church are still being used. “It’s important to maintain that connection, so that when a church is lost, its community is still recognized,” Navit says. “Items that have been entrusted to a community of one time and place have been preserved and passed on to another. It’s a trust and a serious obligation, and, for members of the original church community, an act of selfless giving.”

St. Raphael the Archangel, now rising in Old Mill City, a northern suburb of Chicago, will incorporate the classical facade and twin towers of St. John of God, designed by the eminent Chicago architect Henry J. Schlacks (1867–1938) and closed since 1990. “Everyone wanted a church that looked like a church,” says parishioner Karen Mahoney.

The church will also use the marble interior and furnishings of Chicago’s St. Peter Canisius, which closed in 2007. Mayor Richard M. Daley donated the 92-stop pipe organ that was once housed in Chicago’s historic Medinah Temple. In an immense act of faith and engineering, the two churches have been moved some 60 miles north, where they will be reconfigured as a traditional-looking church with highly unconventional roots.

Sometimes, a church can reuse its own furnishings, as was the case at the Basilica of Sts. Peter and Paul in Lewiston, Maine, where the Rambusch Company created a central altar and font from stone harvested from two side altars.

The Hispanic parish of St. Joseph the Worker in Grand Rapids, Michigan, maximized its $700,000 renovation budget, starting with the building itself, a former Christian Reform church purchased at auction. With the guidance of Father Gilbert Sunghera, S.J. and Progressive AE architects, they obtained an antique image of the crucified Christ and altar from the Diocese of Grand Rapids, and then commissioned José Narezo, an eminent area artist, to embellish the cross’s background and altar furnishings with a colorful mosaic.

Artist Madeline Kaczmarczyk handcrafted floral ceramic tiles for the base of the baptismal font that were inspired by flowers in the parishioners’ former Central and South America homelands. The font bowl was obtained on clearance sale from a Wisconsin foundry. A striking reredos built of inexpensive bamboo flooring planks was made to accommodate a collection of beloved icons and statuary from the old church. The 2008 renovation was accomplished in only four months.

Watch a video of the artifacts aquired for the redesign of St. Bede.

Image: The facade of St. John of God Church in Chicago, which will be used in the construction of St. Raphael the Archangel in Old Mill City, Illinois. Photo by Noah Vaughn 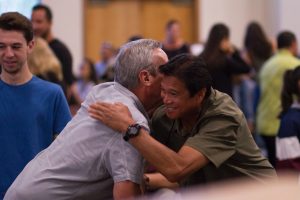 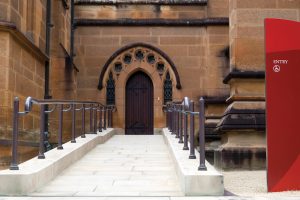 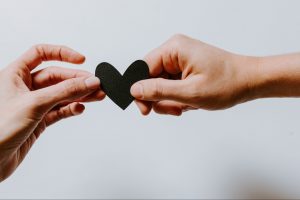 How parishes can comfort the sorrowful and care for the grieving