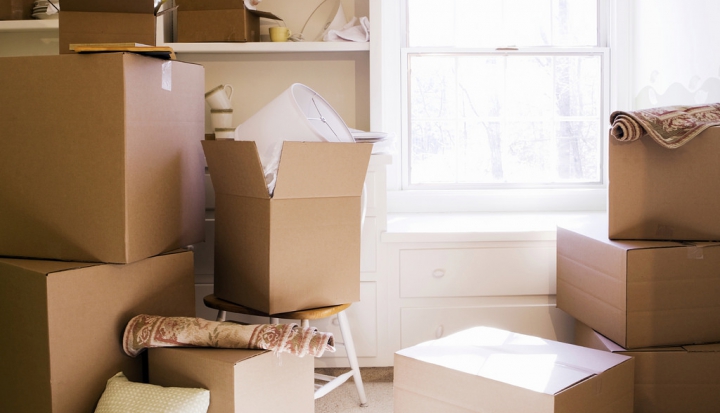 Lent is a good time to ask whether the stuff we hold on to is actually holding us back.

Extra Space Storage is the bluntly self-descriptive name of one of many companies that, in exchange for monthly rent, will let you stow all that junk you can no longer fit in your closet, attic, car trunk, or parents’ basement. There are an astonishing number of them in Chicago; most are leftover warehouses retrofitted with rows and rows of lockers, sliding doors, and cages, complete with motion-sensitive lights and soft rock music, security keypads and locks. It’s basically a creepy, climate-controlled tomb with Rod Stewart crooning in the background.

I have always made fun of these places as icons of American consumerism, thousands of little cubicles filled with God knows what. If you aren’t using it, why keep it? Then I had to downsize while I waited for my house to be renovated, and about half what I owned ended up in a 10-by-10 locker, along with my self-righteousness.

I lived for a year without half my things, and I never really needed them. When I finally unpacked the dozens of boxes, I wondered why I had wasted hundreds of dollars storing them. There were mementos from high school and college, knickknacks from trips, old videos, and CDs. But most of it was books, books, and more books, along with notes from college classes and papers I had written more than a decade ago.

Why was I keeping all this stuff? Did I really think I was going to take up biblical Greek again, or that I had a use for a 10-pound German dictionary? An anatomy textbook? Really?

I used to watch TV reality shows about people who have collected so much that they’ve become completely overwhelmed, prisoners of their own treasured possessions. They couldn’t allow themselves to throw anything away, and they couldn’t say why. Inevitably, once the work of clean-up had begun, the reason became obvious: grief and regret embodied in so many knickknacks, feelings that suddenly burst forth when the show’s host suggested that Aunt Edna’s broken teapot might be ready for the trash heap.

As I looked at my books and papers—almost all of them from my seminary and theology school days—I was surprised by my own unacknowledged sadness. Most of that library was a collection of dreams unfulfilled or only partially so, visions of myself that weren’t to be: me as a priest and pastor, as a theologian and college professor.

Even more, carrying them around—hundreds and hundreds of pounds of them—was wearing down more than my back. There was regret, disappointment, even a sense of failure that I hadn’t lived up to expectations. And as long as they were there in front of me, living where I live, I wasn’t going to move on. They were taking up the space where new life could have a chance to grow—my own little spiritual tomb built in stacks and stacks of paperbacks. Cue the soft rock.

As I carted the last heavy box out of my storage bin, I wondered how many of the things locked up in that big warehouse weighed down their owners as much as mine had me. How many broken relationships or deaths unmourned, how many abandoned dreams or missed opportunities? Maybe that’s what made the place creepy to me, though I’m sure there was plenty of plain old junk in there, along with some items whose owners may need them someday.

If Lent is about anything, it’s about getting back to basics, and the parables and sayings of Jesus are full of encouragement for a situation like mine. “Consider the lilies,” he says, “They neither toil nor spin”—nor do they hold on to stuff they don’t need. “Sell what you have and give to the poor,” advice that benefits the giver as much as the receiver. Jesus probably had no idea what kinds of tombs we would build for ourselves, but he still has the remedy for what ails us.

There are fewer books in my house now, and a great deal of stuff has been donated to someone I hope might be able to use it. There are still some things lingering in the basement, waiting for a last effort to send them on their way.

I still have one small bookcase—there used to be four big ones—though there is little in it. I’ve decided only to put things there that spark my imagination, help me live in the present, or dream new dreams. So far I have a book of poetry or two, a magazine about backpacking, a few favorite novels, and some books I use for prayer.

It’s not much, but I hope I’ve left some room for a little new life, however it may come.