In his interview with the editors, Msgr. Arturo Bañuelas weighs in on cultural issues in the parish. See our full interview with him, It takes a parish.

What’s the key to promoting a Catholicism that isn’t Eurocentric?

When I was ordained a priest, I went to a home where a lady had a picture of the Divino Rostro-a gory image of the bloody face of Jesus, very popular in Hispanic homes. I had been trained in the seminary in Eurocentric theology, and I went to this lady and said, “Jesus has risen! He’s alive, we don’t have to be sad anymore.”

“I want to tell you why I have the Divino Rostro,” she said. “You don’t know what it’s like to live with a macho man. It’s hell. The other day my husband and my son had a fist fight. I never thought I would see such a disgraceful thing in my own family.

This is the Resurrection story. How come I didn’t know this? I’m Mexican, after all.

My Eurocentric training did not prepare me to be open to what the Spirit was going to teach me. I thank God that happened early on in my priesthood because it started to give me a sense that I needed to be open to learn.

Not that Eurocentric thinking is all bad, but sometimes it assumes that what Hispanics believe is not good enough for the Catholic Church; it makes Hispanic expressions of faith secondary or even suggests they are superstitions. Often the Eurocentric mentality assumes Hispanics are ignorant because they don’t all go to the sacraments or they’re not all married in the church, and that’s why they prefer non-sacramental things-second-rate, superstitious things. But that is as valid a Catholicity as any other. It’s just the Hispanic way of being a Catholic.

I’m not trying to put down the European way, but I don’t think the European categories appreciate the richness inherent in the Hispanic Catholic spirituality. For hundreds of years, God has been part of who we are. It hasn’t been a church-centered spirituality.

I think that moment with that woman for me was a conversion moment. Inculturation is key to understanding how to minister, whether black, Vietnamese, or with whatever race or culture. You’ve got to learn the language, you’ve got to eat the food, you’ve got to dance the dance, you’ve got to die to yourself to really journey with the people.

What about the growing numbers of second- and third-generation Hispanics? Are their needs another thing entirely?

There is another generation of highly educated Hispanics. When they hear the church talking about social justice and the poor, they’re thinking, “Well, we left that. My parents were like that, but I’ve got a college degree. I’m a doctor, I’m a university professor.” Are we just paying attention to the immigrant generation and not to this newer generation?

Every other Wednesday I meet with a group of young professionals to study theology, just to form our critical thinking. The sharing among them is incredible. They have a different struggle-it’s not the barrio struggle anymore, it’s not the struggle their parents had. They are struggling because their kids have everything-good schools, a comfortable lifestyle-but are lacking in some ways, spiritually speaking.

This question hasn’t been addressed among Catholic leadership. We’ve got to deal with the fact that Hispanics are not one group. They’re a multilevel group, and one of the levels is a rising middle class.

Read the full interview with Msgr. Arturo Banuelas, It takes a parish. 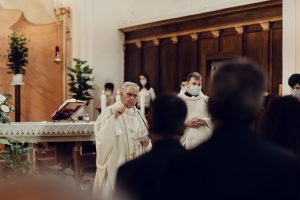