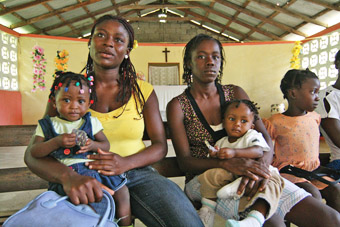 A year after an earthquake killed more than 230,000, Haiti rebuilds its communities on a strong foundation: the country’s brave and faithful women.

To get to her house, Marie Josil walks through a blue tarp camp, where hundreds of Haitians set up makeshift shelters after the January 12, 2010 earthquake tumbled their homes. Where the tent city ends, the cinderblock neighborhood begins.

Her house, a two-room concrete building crammed between a pile of rubble and another home, smells of sewage. But she doesn’t notice. This is how it’s always been.

Josil doesn’t live here anymore. The earthquake ruptured a water line she can’t fix, and her quarters are in ankle-deep water. She’s but one of some 1.3 million Haitians who are homeless a year after the 7.0 magnitude earthquake rocked the island nation.

More than 230,000 Haitians lost their lives in the 30-second quake, many crushed to death by the concrete that used to protect them from hurricanes. Josil, like her peers, set up a place for herself in the field next to her neighborhood.

While hundreds of thousands have been displaced to the rural areas, many subsist in Port-au-Prince. With an estimated population topping 3 million, it’s by far the country’s largest city. Economic opportunities have kept many from fleeing the overpopulated capital for years.

Women face their own challenges as Haiti rebuilds. In urban and rural areas, it is the women who raise the children. But in the poorest country in the Western Hemisphere, where 80 percent of the population lives below the poverty line, women also work to feed their hungry children.

Work keeps Josil in Port-au-Prince. She sells coffee, bread, and peanut butter sandwiches at factories. In June she started working in a Catholic Relief Services (CRS) cash-for-work program, which offers Haitians minimum wage for work that helps the recovery process. Josil, a widow with five children, uses the mortar skills she learned while fixing her own house. “I will work because I’m a tough woman,” she says. “I’m not lazy. I’m not afraid of my body,” a Haitian expression meaning she’s willing to work. “Life is hard, generally, but we’re in the hands of God.”

There are a lot of tough women in Haiti. Bette Gebrian, director of public health for Haitian Health Foundation in rural Jérémie and a registered nurse with a doctorate in medical anthropology, says Haitian culture relies on women as the “holders of the fabric of society.”

“When a father dies, they wear a little black button for a while,” she explains. “When a mother dies, everything stops.”

Women and children are more affected by disasters or emergencies, according to Nicole Balliette, Haiti earthquake response coordinator with CRS. “Those people who were most vulnerable to begin with—women and children—their lives will be that much more difficult.”

Studies indicate that, as a general rule, almost all of a woman’s income is spent on her family. CRS handled food distribution at the camp on the Pétionville golf course—one of the largest with more than 50,000 residents at its height—and made sure to give food vouchers to women.

“You attempt to target the mother because you’ve got a little greater probability that women are going to take whatever assistance it is and use it to benefit their children and other members of their household,” Balliette says.

Camp life exemplifies Haiti’s challenges. Residents aren’t always surrounded by the same neighbors they’ve had for years. They don’t look out for each other as they once did, Balliette says.

The tents provide little protection, and husbands are often gone most of the day looking for work. Domestic violence and rape have escalated since the earthquake, in large part due to camp life.

“Women’s capacity to participate in reconstruction and in child-rearing is encumbered by the lack of security,” Francisca Vigaund-Walsh of Catholic Relief Services says. “The security in the camps is still abysmal, evidenced by the rate of rape. There are reports of some camps where police patrols do not enter.”

Relief agencies, concerned with potential mudslides, have begun to move Haitians from these camps to cities such as Corail in southwestern Haiti. But some are moving back to the Pétionville camp because it’s easier to get work. That’s been the push-and-pull in Haiti for decades: The safety and space of the countryside consistently loses out to the economic prospects of Port-au-Prince.

As much as they might like the safer temporary housing in more remote areas, Haitians want to rebuild their old homes in the nation’s capital, in the communities they know. “We’d like to rebuild Haiti,” says Soinize Alexandre, a Pétionville resident. “We can fix our houses. We don’t like the camps. We don’t have a good life here.”

Mass food distribution has stopped at the camps, at the behest of the Haitian government. Inundating the market with food disrupts trading.

The government and relief organizations have placed a priority on moving residents out of the camps and back to their homes and also hope cutting off food will encourage displaced Haitians back into their homes. Half of the homes affected by the earthquake are actually still inhabitable, according to the government. But people are afraid.

Thunder reminds people of the “goudou-goudou”—as Haitians have come to describe the quake and its aftershocks. For weeks after the earthquake, Port-au-Prince residents were kept up at night by the sounds of their mourning neighbors wailing at night. Children are frightened of stepping into homes with concrete roofs. Some, suffering from post-traumatic stress, wet their beds at night.

Rubble, which crowds the already overcrowded Port-au-Prince streets, also keeps camp residents from moving back into their homes. In some communities, leaders have emerged and residents are taking the rebuilding effort into their own hands. Raphael Altide and Soly Santhia are an example. They pestered CRS until CRS helped the women establish a small business. Now they are heading up a rubble-crushing operation, reselling or reusing building materials while creating jobs and income for about 20 people in a Port-au-Prince neighborhood.

“I have my children here,” Altide says. “But my children are all the people of this community, and I want them to eat.”

Hundreds of thousands of displaced Haitians have left Port-au-Prince. An estimated 12,000 families went to Ouanaminthe, a city of 100,000 where they could move in with relatives or friends.

Though remote, this rural town on the border with the Dominican Republic isn’t without its dangers. It’s common for women and children to be trafficked across the porous border, often winding up in tourist areas of the Dominican Republic, according to Vigaund-Walsh, who established CRS’ outreach in Ouanaminthe in February.

“In places of conflict, women’s bodies are seen as fair game,” she says. Post-earthquake Haiti resembles conflict-ridden developing countries. Women become “war terrains, so to speak. It’s a way of disempowering your enemy. Rape someone’s wife and you’ve demonstrated to the husband that he doesn’t have power to protect his family.”

Yet Haitian women also serve as lawyers and surgeons. Haiti has a Minister of Women’s Affairs and Women’s Rights, and women have served in various government roles, including two as prime minister. Ertha Pascal-Trouillot was provisional president of Haiti in 1990, and at press time Mirlande Manigat was the front-runner for the November 28 presidential election.

Women outnumber men in Haiti. Men work in the Dominican Republic or on ships, and they’re more likely to die performing dangerous jobs. Considering Haitians’ hard life—before and after the earthquake—Gebrian, of the Haitian Health Foundation, is taken aback by their resilience.

She tells a story of an employee whose family was crushed to death during the earthquake. Gebrian offered a prescription for anti-depressants. It was summarily refused.

“I offered her time off, but she said, ‘I’m OK,’ ” Gebrian says. She asked the woman if she cried at night. The woman answered, “You can’t. You just put one foot before the other and keep going.”

Faith is crucial to this attitude. An estimated 80 percent of Haitians are Catholic. Marie Claude Pierre lost her mother in the quake and now cares for two half-sisters in addition to her own five children. “The moment is difficult,” she says. “You never know. It’s in God’s hands. You never know.”

“In God’s hands” is practically a mantra in Haiti, now more than ever. Coping with the estimated 85,000 who moved to the country’s southern areas has been an economic and spiritual challenge.

Estabvu Dilainu, the leader of a farmers’ co-op in Les Anglais, added 10 to her household of 12. She and Pierre are two of 40 farmers who have pooled their resources in order to avoid loans with 25-percent interest just to buy seeds.

“As hard as we worked, we’d just be paying interest,” Dilainu says. “We’d have to sell our own food.” The farmers sell four days a week, sometimes at a market hours away, but they also grow their own food.

There’s a saying in Haiti: “Cooked food doesn’t have an owner.” As poor as these families are, they often feed more than just their own kin. A neighbor gets a whiff of your rice and beans or fried plantains, and suddenly you have company for dinner. In many ways, the country’s greatest strength lies in community.

“We have to begin to see the community as family,” says Bishop Pierre Dumas, president of Caritas Internationalis in Haiti. “The soul of the recovery is in the community.”

Women—often the economic providers as well as first educators—are the community’s backbone.

“Women are playing a leading role in taking care of their children and having a more long-term viewpoint with regard to the welfare of their families,” says Balliette of CRS. “They’re in there, working toward this. Getting their children health care and to school. They’re on the front lines of the recovery effort.”

The challenge for relief organizations, she says, is to make sure they’re hearing from women. “No matter what, they’re doing the work. We need to respond to their needs and respond to what they think is most important.”

Image: Ducrecile Jean and Kaitlin Saint-Cyr sit with their 1-year-olds in Sacre Coeur Church in Coteaux. Photo by J.D. Long-Garcia 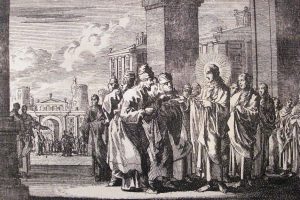