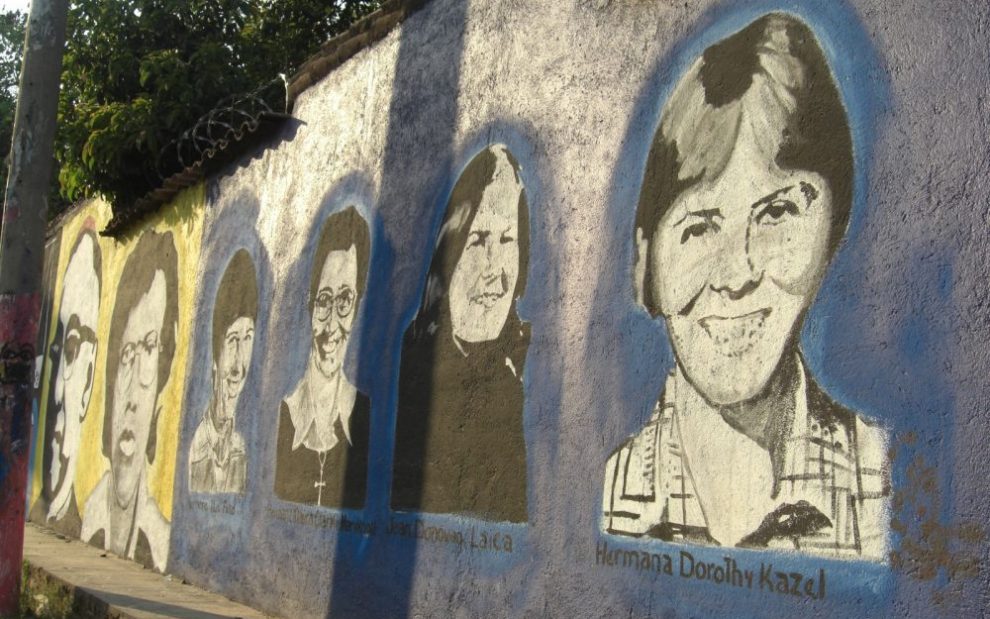 When I heard the news that four U.S. church women, including Jean Donovan, were raped and killed in El Salvador on Dec. 2, 1980, I was a senior at Duke University with plans to enter the Jesuits. But I was having second thoughts. What difference could I make? How can one witness to Christ in such a harsh world? Why bother?

Their deaths changed my life; I reconfirmed my decision to become a Jesuit. Within a few years, I befriended Donovan’s parents, Pat and Ray, and organized speaking events for them around the country. In 1985, while working in El Salvador, I prayed at the lonely place where they were killed. A stone cross marks the spot, and a plaque there reads: “Ita Ford, Maura Clarke, Dorothy Kazel, and Jean Donovan gave their lives on Dec. 2, 1980. Receive them, Lord, into your Kingdom.”

Jean Donovan, along with the heroic sisters, offers a rare gospel witness in these brutal times. Donovan was born on April 10, 1953 and grew up in upper-middle-class Westport, Connecticut. During college she spent a life-changing year in Ireland, where a charismatic priest committed to the Latin American poor challenged her to serve God’s poor. In 1977 Donovan quit her executive consulting job at Arthur Andersen, a national accounting firm, said goodbye to friends, and joined the Maryknoll lay mission program.

For the next few years she served a poor parish in La Libertad, El Salvador. She managed its budget, played with children, and helped other church workers. But the brutal government’s war against the poor intensified. The streets were filled with soldiers, and dead bodies were left along the roads. Donovan and the sisters buried the bodies and supported the distraught relatives who searched for their loved ones.

Donovan and the rest of El Salvador found hope in the fearless homilies of Archbishop Oscar Romero. She wrote to a friend that his message was convincing her that prayer does make a difference. In gratitude, she baked and delivered chocolate chip cookies to Archbishop Romero every Sunday.

On March 24, 1980, Romero was shot while presiding at an evening Mass. During the funeral Mass, the army threw bombs into the crowd of 30,000 mourners, killing 30. Although Donovan was terrified at the funeral, she told herself that if she were killed, she would go straight to God.

“There are lots of times I feel like coming home,” Donovan wrote a friend afterwards. “But I really do feel strongly that God has sent me here.”

“Everything is really hitting so close now,” she wrote her Irish priest friend in May 1980. That summer Donovan was devastated when her two closest friends were assassinated after walking her home from a movie.

In September Donovan took a six-week vacation, visiting her parents in Miami and her boyfriend in London. She also attended a wedding in Ireland and stopped at Maryknoll in New York, where, a friend later told Donovan’s parents, she spent several hours in the chapel. She confessed her fear that she might be killed. “When she came out [of the chapel],” Pat Donovan recalled, “the sister said that she was an entirely different woman. She was ready to go back. She had made her peace with whatever frightening thoughts she had.”

After visiting Cleveland and Miami again, she returned to El Salvador to pick up the bodies, console the grieving, and lead the poor in prayer. “Life continues with many interruptions,” she wrote. “I don’t know how the poor survive. People in our positions really have to die to ourselves and our wealth to gain the spirituality of the poor and oppressed.”

In November, while riding her motor bike, Donovan noticed a U.S. military helicopter following her. The U.S. ambassador denied that U.S. helicopters were in El Salvador, but much to his chagrin, Donovan knew the name and model because her father spent his life helping to build them.

On December 2, Donovan and Kazel drove to the airport to meet Ford and Clarke, who were returning from Managua. Two days later their bodies were discovered in a makeshift grave about 15 miles away from the airport. They had been raped and shot at close range. Donovan’s face was completely destroyed. She was 27 years old.

Jean Donovan and the sisters invite us to enter the world of the poor, share their powerlessness and pain, and risk the consequences of this Christian solidarity. In the face of the poor, broken, and battered people of El Salvador; in the face of the refugees, the homeless, the hungry, and the displaced; even in the face of the enemy, Donovan saw the face of Christ. After such a spiritual encounter, there was no turning back. Christ gave Donovan his spirit of nonviolent love, empowering her to stand with the powerless even unto death. In the end, she knew a peace not of this world.

John Dear is a Catholic activist, lecturer, and author.