(This story accompanies The need for closure: What happens when a parish closes its doors.)

Whatever church leaders do, parishioners aren’t going to be happy about a closure or merger. But leaders can ease the change by paying attention to a community’s emotional needs and by involving parishioners in the process.

Build leadership from within: The agents of change can’t be outsiders, according to Daniel Gast, director of INSPIRE, a partnership initiative of Loyola University and the Chicago archdiocese.

“We start with the leadership of a few persons-one of the persons being a pastor,” he says. From there, a larger group of parish leaders are selected to facilitate discussion groups and inform the community. Get people involved.

Let information flow freely: Anyone involved in church groups knows the infectious nature of gossip, negativity, and even conspiracy theories. Leaders need to get ahead of this.

“We create a transition communication team that gets information out to everyone every week,” says Jesuit Father Tom Sweetser, director of the Parish Evaluation Project based in Milwaukee. “If you don’t do that, there’s rumors flying to everyone.”

Listen: But the information shouldn’t go one way, says Sweetser. Parish leaders should also welcome feedback and allow parishioners to vent. The change affects routines, from the place and time of going to Mass to which day the kids attend faith formation. An unexpected closure can shock a community. Leaders should grease the skids.

“Some people say ‘over my dead body,’ and they push and shove,” says Sweetser. “Even when you give a reasonable scenario, people are reluctant to see the wisdom of it. They’re not really thinking, they’re just reacting. It’s an emotional thing. They just dig in even stronger.”

Recognize that you’re creating a new parish: When two parishes are united, they become a whole new community. It’s a good idea for leaders to recognize that nascent identity, according to Gast.

“Those parishes and those teams that build through the change are able to name the particular mission of their new parish,” he says. That’s crucial when a larger parish absorbs a smaller one.

“Both places have to change, not just one welcoming another one,” says Sweetser. If not, the members of the smaller parish will feel like they’re losing out to the larger parish.

“It really does need some effort at tending to the uniqueness of each place. Sometimes we screw up, too, but we try to let everyone be involved and look at what people are saying.”

Close down with grace: Church leaders should pay as much attention to closing parishes as they do to opening new ones, according to Jesuit Father William Clark, assistant professor of religious studies at the College of the Holy Cross in Worcester, Massachusetts.

“Not just by way of having a simple final Mass,” he says, “but by recognizing that there’s a serious emotional cost-and a spiritual cost, in a sense-of closing these buildings.”

Be honest about the loss, says Gast, and talk about it. “If something is ending, we acknowledge that. Then we can ask how we can clear a space for a new thing to emerge.” 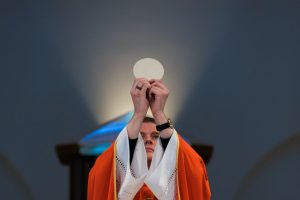