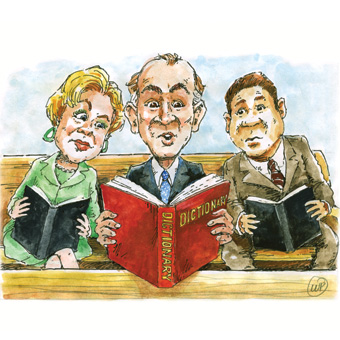 Why the new Mass prayers may be confusing.

I was leading a group discussion on the merits of the renewed liturgy of Vatican II when John, a middle-aged businessman, commented, “I can’t imagine my life without the liturgy; it strengthens me each week—but I never understood the Mass until we had it in English.”

What prompts this new translation? In 2000 Pope John Paul II authorized a new edition of the Roman Missal, the book that contains the texts of the Mass. The new translation of it is slated to be ready for use next year.

In 2001 the Vatican Congregation for Divine Worship and the Discipline of the Sacraments issued new principles and directives for translating from the original Latin into the vernacular in a document called Liturgiam authenticam. Following these new norms, the translation of the new Missal has intentionally employed a “sacred language,” which tends to be remote from everyday speech and frequently not understandable. For example, the Preface, or opening of the Eucharistic Prayer, of the Assumption says of Mary’s delivery of Jesus: “She brought forth ineffably your incarnate Son.”

When the bishops at the Second Vatican Council made the historic decision that the liturgy of the church should be in the vernacular, there was no mention of sacred language or vocabulary. The council’s intent was pastoral—to have the liturgy of the church prayed in living languages. Translated liturgical texts should be reverent, noble, inspiring, and uplifting, but that does not mean archaic, remote, or incomprehensible. While the translated texts of the new Missal must be accurate and faithful to the Latin original, they must also be intelligible, proclaimable, and grammatically correct. Regrettably the new translation fails in this regard.

Did Jesus ever speak to the people of his day in words beyond their comprehension? Did Jesus ever use terms or expressions beyond his hearer’s understanding? Jesus did explain the parable of the sower privately to his disciples in Mark (4:10-12) and Luke (8:9-10). In John 6 many of Jesus’ disciples found his Bread of Life discourse hard to accept. In these instances it is the message—not its vocabulary—that required further explanation.

Vatican II’s Constitution on the Sacred Liturgy showed pastoral wisdom when it specified that liturgical texts should “be within the people’s powers of comprehension and normally not require much explanation.”

But in the new Missal there are whole prayers that are extremely difficult to understand. For example, in the Votive Mass of the Holy Spirit, the prayer after communion reads, “Let the outpouring of the Holy Spirit, O Lord, cleanse our hearts and make them fruitful within by the sprinkling of his dew.” In the epiclesis, or invocation of the Holy Spirit in Eucharistic Prayer II, the celebrant will pray: “Make holy, therefore, these gifts, we pray, by sending down your Spirit upon them like the dewfall.”

What will people understand by “the sprinkling of the Holy Spirit’s dew” and “dewfall”? The words are pregnant with poetry and scriptural meaning, but if they fail to be understood by the average worshiper, they fail pastorally. Or consider the opening prayer on the Monday of the fifth week of Lent: “May we bring before you as the fruit of bodily penance a cheerful purity of mind.” What do these words mean?

Some proponents of the new translation maintain that obscure words present a catechetical moment for the homilist to explain. But should the homily be used for unraveling technical, archaic, and unusual words? The Constitution on the Sacred Liturgy says that the homily should be rooted in the biblical readings of the Mass and should proclaim God’s magnificent works in the history of salvation.

A major defect of the translated Missal is the number of lengthy, cumbersome sentences. Translated liturgical texts involve public proclamation and must be intelligible to the assembly on first hearing. The prayer after the third reading at the Easter Vigil has one sentence of 65 words in 10 lines. In the Preface of Christ the King, there are 13 lines and 88 words in one sentence. Eucharistic Prayer III begins with 70 words in one sentence.

How will this promote intelligible and meaningful prayer? How can the assembly remember what is being prayed for?

In almost all instances the opening prayers, prayers over the gifts, and prayers after communion follow a single-sentence format with one or more clauses. Again and again proclaimability and comprehension are sacrificed for the sake of maintaining the Latin single-sentence structure.

But Latin word order is not English word order. Rigidly following an artificial word order undermines the natural rhythm and cadence of the English language, thereby stifling comprehension and diminishing participation in the Eucharist.
American Catholics have every right to expect the translation of the new Missal to follow the rules of English grammar.

The new translation of the Nicene Creed is a good illustration of flawed English. Presently the creed is divided into four parts, each headed by the phrase “we believe.” In the new translation there is only one introductory phrase (“I believe”). This results in incomplete sentences for the different articles of faith.

For example, the newly-translated creed reads: “He will come again in glory to judge the living and the dead, and his kingdom will have no end.” This sentence ends with a period, but the very next article of faith simply begins: “And in the Holy Spirit, the Lord, the giver of life.” Another article of faith begins in the same fashion: “And one holy, catholic, and apostolic Church.” Neither is a sentence since they lack a subject and predicate, and they are respectively 26 and 32 lines distant from “I believe.” Such formulations hurt clarity and intelligibility.

The American bishops in 2006 approved and sent to Rome the text of the creed that repeated “I believe” for each article of faith, since that repetition clarified the prayer and provided proper sentence structure. Rome eliminated this recommendation of the U. S. Conference of Catholic Bishops.

Vatican II specified a pastoral approach in the Constitution on the Sacred Liturgy: “Both texts and rites should be drawn up so that they express more clearly the holy things which they signify. The Christian people, as far as possible, should be able to understand them easily.” Paragraph 34 of the constitution offers an even stronger statement: that rites and texts “should radiate a noble simplicity. They should be short, clear, free from useless repetition. They should be within the people’s powers of comprehension, and normally should not require much explanation.”

But this pastoral style is missing in the new translation, which is especially evident in Eucharistic Prayer III. Presently we pray: “Welcome into your kingdom our departed brothers and sisters and all who have left this world in your friendship.” This is a clear, straightforward, hope-filled, understandable prayer. However in the new Missal it reads: “To our departed brothers and sisters and to all who are pleasing to you at their passing from this life, give kind admittance to your kingdom.”

Contrast the phrasing: “welcome into your kingdom” versus “give kind admittance.” The first is inspiring, hope-filled, consoling, memorable. It conveys the thought, “Lord, welcome, open your arms.” “Give kind admittance” is dull and lackluster, reminding one of a ticket-taker at the door.

With the recent approval of the text of the new Missal, the real task begins. It will then be incumbent on bishops and pastors of the church, along with others in liturgical and educational ministries, to catechize and convince the people that the new Missal is an improvement on the current one.

Is that completely true?

[A note on the survey results: There is at least one thing U.S. Catholic subscribers and uscatholic.org visitors agree on: They are concerned about liturgy. Fewer than 1 percent said they don’t care enough to have an opinion on the new translations. But their enthusiasm plays out in very different opinions on the language of the Mass.

Nearly 90 percent of subscribers said they prefer the Mass in an easy-to-understand translation of the Latin, but only 15 percent of more than 3,500 who responded to a quick poll on uscatholic.org feel the same way.

Why the difference? The number of respondents to our monthly online quick polls usually spikes when various Latin Mass advocates link to them from their blogs—especially when we ask for opinions on the liturgy. Some of these Latin enthusiasts also took the whole survey, thereby skewing the results to be less reflective of our regular readers.

For the print magazine, we chose to highlight only the responses of 477 U.S. Catholic subscribers. Those results are shown here, but we’ve also included the results of everyone who took the survey, both online and in print.]

2. I think the new translations are part of an attempt to roll back the liturgical reforms of Vatican II.
Agree  54%
Disagree  34%
Other  9%

3.  I don’t really pay enough attention at Mass to notice how good or bad the translations are.
Agree  1%
Disagree  96%
Other  9%

5. More elevated language will help restore a much-needed sense of mystery to the Mass.
Agree  43%
Disagree  51%
Other  6%

6.  I worry that young people and those considering joining the church will be turned off by a liturgy that sounds esoteric or out of touch to their ears.
Agree  52%
Disagree  42%
Other  6%

2. I think the new translations are part of an attempt to roll back the liturgical reforms of Vatican II.
Agree  81%
Disagree  14%
Other  5%

3.  I don’t really pay enough attention at Mass to notice how good or bad the translations are.
Agree  2%
Disagree  95%
Other  3%

5. More elevated language will help restore a much-needed sense of mystery to the Mass.
Agree  10%
Disagree  81%
Other  9%

6.  I worry that young people and those considering joining the church will be turned off by a liturgy that sounds esoteric or out of touch to their ears.
Agree  82%
Disagree  10%
Other  8%

Bishop Donald Trautman is the bishop of Erie, Pennsylvania and former chair of the USCCB Committee on the Liturgy.