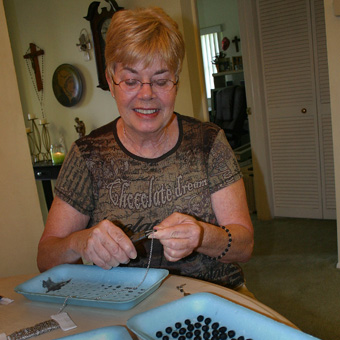 Six years ago, Sharyn Gildea descended to the darkest place a mother could possibly go.

David, her handsome, sweet son, plagued by depression and drugs, hanged himself at age 26. He left behind a young daughter named Ely and a broken-hearted mother.

"You're not sure how you will survive something like this," Gildea says, divorced and the mother of two other grown children.

She found her strength in God-and in rosaries. Not just praying rosaries, but making them out of dried flowers from life's milestones, such as funerals, weddings, and anniversaries.

After David's death, Gildea didn't want to part with all the flowers sent to her in his memory. As they began to dry up, she remembered the year and a half she had worked as a seamstress in an Ohio monastery in the early 1990s. The older nuns used to make rosaries from flowers left at the church, but they kept the secret of the craft to themselves.

"These days, you can find anything on the Internet," she says. "I just got online and found the directions."

It takes about five hours from start to finish to assemble such a handmade rosary. The hours went quickly, with Gildea using that time to pray and work through her immeasurable grief.

She made five for surviving family members, keeping a baggie of remaining petals. When the project was completed, that feeling of hopelessness and loss came back tenfold. Could she have prevented her son's death? Was she to blame at all?

Three months after David's suicide, Gildea prayed in her car as she headed to a friend's birthday. "God, give me a sign that things will be OK," she cried out.

She got the sign at the party. Two concerned friends each came bearing a vase of roses for Gildea. At that moment, she felt God was calling her to continue making the rosaries-this time for others.

"I know what a comfort it was to my family to get a handmade rosary connected to David's memory," she says. "It seemed like the right thing to do for others."

As the sacristan for her church, Our Lady of Lourdes in Dunedin, Florida, Gildea has access to an unending supply of flowers. She began making the rosaries by request, filling all her spare hours. In all, she estimates she's made about 1,000-all given away for free.

In December, no longer able to keep up with her one-woman mission, Gildea got the blessings of her pastor to launch a "Rosary for Life" ministry at her church. A dozen or so mainly female volunteers ages 10 to 90 meet every Tuesday night to roll petals, string beads, pray, and laugh. She's also leading a workshop for teachers at the parish school, so they can pass on the skill to students.

"I never imagined how this would transform," Gildea says. "I just let God guide me. That's why you always need to listen to that small, still voice within."

Her ministry has also led to another venture: In 2009 Gildea published a children's pamphlet called "My Rosary Booklet," giving step-by-step instructions on praying the rosary and what each of the mysteries mean. It's for sale in the church's gift shop, with proceeds to benefit parish ministries.

She's dedicated the booklet to her grandchildren in memory of the son she'll hold in her heart forever.

"You don't ever get over something like this," she says. "It still hurts. But I feel David's presence with me every day I'm making a rosary. This is the good that came out of something so sad."