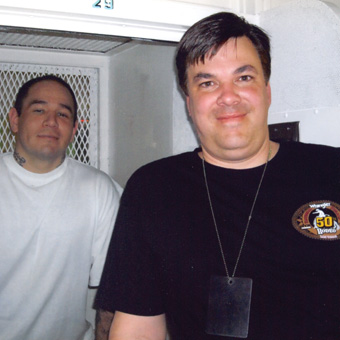 Michael Denson lives in a state where 87 percent of the residents support the death penalty.

As far as the Frisco, Texas man is concerned, that's all the more reason for him to devote his spare hours to serving a population that his fellow Texans would just as soon see disappear.

"The general attitude is ‘Let's kill them, and let's kill them as quick as we can.' I don't judge others for holding that opinion, but it doesn't work for me," he says.
What works for Denson, 41, is a ministry whose 15 or so volunteers around the country write letters of support and make personal visits when requested by inmates in maximum-security prisons. So far, they've written or visited some 1,400 prisoners.

Even though he's got the blessing of the Catholic Diocese of Dallas, Denson knows this isn't the most popular outreach. When he founded the Catholic Death Row Ministry 21 years ago, he never expected that many like-minded people would share his passion for bringing hope to people who have destroyed hope for others. But he felt it was something he was called to do.

That calling came at any early age. His first lesson of Christian compassion to felons began with his mother, who regularly wrote letters to inmates who requested pen pals to help ease their loneliness. When he was 8 years old, Denson asked her to write a letter on his behalf to the notorious Gary Gilmore, who murdered two men in Utah and would later be executed by a firing squad in 1977.

Then the FBI called my mom and told her that her young son wrote this letter to Gilmore, saying he wanted the inmate to meet his dad when he went to heaven," Denson chuckles. "My dad died when I was 5, and since it seemed certain that this man was going to die, too, I was hoping he'd look for my dad."

Until recently Denson made his living as a rancher, raising cattle on 125 acres. He and his wife, a teacher, have two daughters, ages 8 and 12. His ministry on death row takes up more and more time in his life these days, with frequent visits to a state prison-a drive of more than four hours one way.

Denson knows that some inmates only agree to see him out of boredom or an excuse to have contact with the outside world. He gives them Catholic publications or Bibles, knowing that some will be discarded. But for the few who make a spiritual transformation, those are worth all his efforts.

"I tell them they can con me, they can con their victims and the prison guards, but they can't con God," he says.

At the request of the inmates or family members of victims, Denson has witnessed four executions. It is never easy, and he has yet to get that feeling of closure he had been promised. His only comfort is knowing the inmates had heard a message of God's love in their final days-and his hope they had sought God's forgiveness.

Denson's work with victims continues to grow. Family members of those murdered will often call him, sometimes to scream and curse. One said she hoped his wife and children would be run over and killed, then finally broke down and wept, asking him to forgive her.

Another said, "The state told me I'd feel closure after the execution, but I don't feel closure. I know you knew the inmate. What did he say? Can you help me forgive?"
Denson points out that while state officials tell victims that they will feel closure, many find that a hollow promise. One woman told him, "It's a year later and I'm still waiting to wake up and be able to breathe in the morning."

Time and time again, he is asked: How would you feel if someone murdered your child?

"I would pray that God would give me the grace to forgive," Denson says. "No matter what, I still believe that only he has the right to take a life."

Next: James McLaughlin files taxes for the poor.