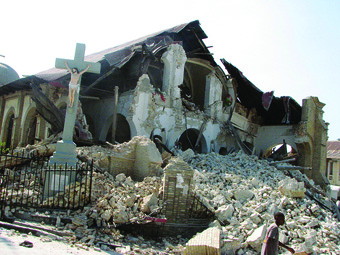 When horrible things happen in the world, it’s natural to seek an explanation. Explanations offer a sense of control and meaning in situations that seem devoid of both. The devastation in Haiti caused by the January earthquake has left many asking, “Why did this happen?” Answering that question can be confusing and difficult when we consider our faith in an all-loving and all-powerful God.

It can be easy to blame God, but easy explanations such as “it’s God’s will” are dangerous. Some have even called the kind of God that these explanations depict “morally intolerable.” Moreover, when we say, “Everything happens for a reason,” and that thing is an earthquake in Haiti, we run the risk of justifying such death and destruction. Even worse, we may become complacent to it, not acknowledging the human role in creating structures and systems that contribute directly to the aftermath of a natural disaster. When an earthquake strikes Los Angeles, the death toll doesn’t reach 150,000.

In short, there’s no satisfactory answer for why natural disasters happen. While we believe that God is the creator of the universe, we also believe that everything in it-from the humans who walk on the earth’s crust to the plates that float just beneath it-enjoys a natural freedom that leaves some things up to chance. Just as a bird will fly, a plate will move, and occasionally that can result in an earthquake. Naming God the direct cause of that collision would undermine the freedom of creation and challenge whether God is truly all-loving when we consider the results.

Fortunately, our faith does give us an answer to the question “Now what?”

The late Dominican theologian Edward Schillebeeckx could not see the kind of suffering that has resulted from the earthquake as having anything to do with the reign of God. For Schillebeeckx, God is the source of life, a truth proclaimed in the gospel and remembered in our celebrations of the Eucharist. Jesus did not cause innocent people to suffer in order to bring about a greater good or to teach them a lesson. He preached about the reign of God and backed up his words by healing the sick and feeding the hungry.

With this in mind, Schillebeeckx said that we can never reconcile human suffering to God. At the same time we cannot ignore it but must confront it as something that should not be. This hopeful response affirms the fullness of life that God desires for everyone. The worldwide outpouring of prayer and support for the victims of the earthquake is an example of such a response.

This approach to suffering is especially important for today because it helps us to discover meaning in the right places without resorting to a blame game with God. Most important, it demands that we respond with hope both in our reflections and in our actions.