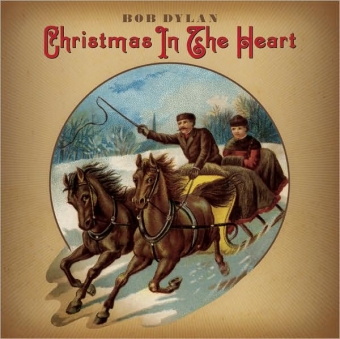 Post-Modernism or Nostalgia? Commonplace or Avant Guard? Success or Failure? Even a cursory listen to Bob Dylan's latest album, Christmas in the Heart (Columbia, 2009), stirs these questions and more. Just what is Dylan up to? You may approach this album as the most formulaic type of exercise geared at simply raising a profit, but alas Dylan is too clever for that. The proceeds of this musical endeavor are directed at raising money for the hungry worldwide. Since it's a benefit album, you'd think it would be a traditional Christmas album, with accessible versions of the most well-known and well-loved Christmas songs. Well… anyone who has seen the video he recently made for "Must be Santa" would have a difficult time arguing that it's traditional. So what exactly is it?

For some it's a perplexing mess: traditional instruments, back-up singers who seem to have recently stepped out of a studio session with Patsy Cline, mention of former presidents "Nixon, Bush and Clinton" with reindeers Donner and Blitzen, and finally, Bob Dylan sings in Latin. But some may find delight where others find confusion. But when Dylan sings "Winter Wonderland" it is certainly a musical landscape filled with bizarre and strange wonders.

This is not to say that I think Dylan intended this mystery as the central focus of his Christmas album. But, the gift of mystery or a true surprise at Christmas can be wonderful for those whose lives are burdened by hardships and the relentless mundane routine of Christmas festivities. Something new that strikes of mystery is welcome. I, for my part, had to wipe the tears from my eyes as I laughed whole heartedly at Dylan's curious renditions. And so far, as I continue to re-listen, they still bring a smile to my face. Thank you for the Christmas gift Bob Dylan.