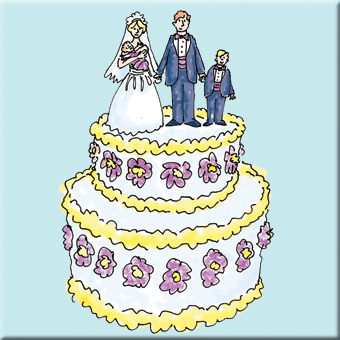 Catholics should find a way to welcome couples whose paths to the altar don't go straight down the center aisle.

Full disclosure: I hate weddings. Don't get me wrong. I think marriage is great, but the actual celebration for me is generally a nails-on-chalkboard experience. Whether it's the cast of color-coordinated thousands, the infants (and pets) in wagons as flower children, or the fiscal black hole of the bridal-industrial complex, I find it all a bit much.

The latest nuptial innovation, courtesy of a St. Paul, Minnesota couple, featured the wedding party boogying down the aisle to a hip-hop ballad. With 20 million-and-counting hits on its YouTube video, I think we may have a liturgical catastrophe on our hands. I may never go to a wedding again.

If that wasn't enough, the Church of England has issued an official ritual for a single-service wedding and Baptisms of the couple's children-a sacrament combo platter. Turns out that 20 percent of the couples coming to the Anglican church to marry already have children, either together or from a previous relationship. Britain's Office of National Statistics has noted that having children, not getting married, is now often the first major milestone of adult life.

On second thought, the Anglican move seems refreshingly reality-based. "Patterns of relationship and marriage within society are presenting new opportunities for the church," Bishop Stephen Platten, who chairs the Church of England's liturgical commission, told CNN. He hopes more unmarried parents will go ahead and tie the knot.

Not every Anglican was so excited about formalizing what had been a pastoral adaptation. Stephen Robinson of the Anglican group Forward in Faith called the plan "bonkers," according to the U.K. Mail. "We are following the methods of the supermarkets: Buy one, get one free. I don't know why they don't do a bumper deal and offer all seven sacraments in one service." Others suggested that the wedding/Baptism twofer will encourage sex before marriage (as if there were need of such encouragement).

It is true that baptizing children at the wedding acknowledges the obvious premarital sexual relationship. But before we lament the destruction of the family, we should remember that until the last century or so, children (or at least pregnancy) often preceded marriage and still does in many parts of the world, so this is well-traveled ground.

And like it or not, the courtship-marriage-sex-children pattern is fading. U.S. statistics from 2007 show unmarried women accounted for nearly 40 percent of births. More than 13 million unmarried heterosexual couples live together, according to 2008 U.S. census data, and more than half of couples who eventually marry live together first.

It's also worth noting that the parents seeking to marry are realizing that they want and need the church, and so are coming with their children to the sacraments. No matter what path brought them to the altar, they ended up where Christian tradition wants them to be, in (one hopes) permanent sacramental relationships. With blended families, weddings are often not only about the couple but about their children as well. Making the wedding a time of commitment for everyone is a great way to support such families, whether that means Baptism or something else.

We in the Catholic Church will have to make our own choices about this issue eventually, but it is more than a merely liturgical question. It's first about how we respond to couples whose personal histories don't follow the moral norm the church presumes but who come seeking Christian marriage anyway. Whether an official Catholic rite that includes Matrimony and Baptism will ever exist is up for grabs. What isn't is the fact that the realities of modern family life have changed dramatically.

We could, on the one hand, continue to insist that cohabiting couples separate and that divorced Catholics unable to obtain an annulment forgo marriage-and watch as more and more Catholic couples and their children walk out the church door. Or we could skip the finger-wagging and find new ways to promote the ideals of fidelity, love, and permanence embodied in marriage, while accepting the plain fact that not everyone will take the same path to reach them.

I, for one, will root for the latter-as long as we all agree to keep the liturgical boogying to a minimum.