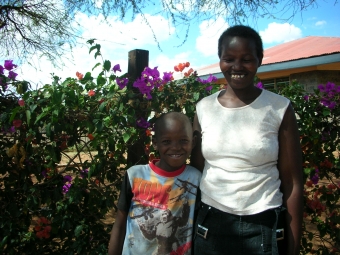 Steven Saitabau was one of 23 that were baptized in one Kenyan parish the first weekend of October 2008. Nine years old, he had lived half is life without a Catholic parish nearby.

The parish of Ewuaso Kedong, a small trading town where Steven lives, opened in 2004 and covers 40 miles of the bush southwest of Nairobi, where zebra graze along with the cattle herded by the still very traditional Maasai tribe. It is young and growing, just like the Catholic Church in Kenya.

Missionaries first came to East Africa in the late 1800s, and the first four dioceses in Kenya were first established in 1953. Today there are 26 dioceses in Kenya, and about 33 percent of the country is Catholic. The Catholic Church is growing faster in Africa than any place else in the world, according to the Vatican's calculations. The church already has seen the transition in Rome, Phillip Jenkins writes in The Next Christendom. The first African cardinal was ordained in 1960, but by 2001 40 percent of cardinals were from the Third World.

Jenkins says the impact of this shift in population will be a more conservative church focused on Catholics in these developing countries. The shift has a real impact on Kenyans as well. In the wake of last year's post-election violence, church leaders hope that Christian values and education will promote economic and social progress.

The difference can be seen in the Maasai, many who are committed to their traditional lifestyle, which includes polygamy and female genital mutilation. The church struggles to prevent girls and boys being pulled from primary school to be married out or to become shepherds.

Men who grew up with Catholicism and had a primary education, though, often don't want multiple wives, explains Edward Naigisa, a young Maasai man. "Faith can really make a difference."

Though the parish is new, local Catholics started a kindergarten in 2001. Catholics first came to the area in 1976 and started a primary school now run by the government.

Steven, his mother Veronica Masangira says, is the best student in class 3 at the government school. She attributes his success to attending the parish Kindergarten and English lessons offered by a nun at the parish. Like Catholic parents in the United States, Masingira and other parents appreciate that the school is faith-based and has good academics and discipline. Masangira hopes that her son will be able to use his education to create a better life for himself.

Ewuaso Kedong and the surrounding areas have benefited from their Irish missionary pastor, Father John Fortune, I.C., but the shift in the church toward Africa is especially evident among priests. Many missionaries come from other African countries, and even Asia and Latin America, but even more priests and religious are coming from Kenya.

Mwangi grew up in Embulbul and walked eight kilometers to attend church and school. "My parents were very poor, so I was happy helping in the parish on Saturdays. I used to work, to clean the benches in the church . . . I used to get something from the priests, something small to keep me going. I think I had love for the church from then on."

Mwangi credits Mary, Mother of God Parish, just 10 years old, for building up his hometown physically and spiritually. The parish grounds hold not only a church, but also a counseling center, an infirmary, and primary and secondary schools. As is the case throughout the developing world, the church serves the whole community, not just Catholics.

St. Mary, Mother of God is the diocese's second largest parish with 2,000 members. Pastor Fabian Hevi, S.M.A. reports that there have been 1,000 adult Baptisms in the parish's 10-year history, and 10 to 20 infants are baptized each month.

Though the United States has struggled with a priest shortage, it is much worse in the developing world where the Catholic population is growing. Take the 10-year-old Diocese of Kitale, for example. With nearly 200,000 Catholics, it has 3,400 laypeople to each priest. In the United States, there are on average about 1,500 per priest.

Kenya's solution to this problem is similar to U.S. parishes that share a pastor, only instead consolidating parishes, Kenyan parishes add new "outstations."

Father Fortune's 40-mile territory around his Ewauso Kedong base includes seven outstations ranging from seven to 700 people. Outstations have a service every week with a lay catechist and Mass once a month with Fortune.

"We as priests, without the catechists, we cannot do much," says Vicar General Mwangi. "He's the one that knows what's happening deep inside the village."

Catechists, who are lay volunteers, run services when priests aren't available, teach the faith to children and adults in school and the community, and lead small Christian communities, catechist coordinator of the Ngong diocese Joseph Ole Mpaera says.

All around Kenya, church leaders credit small Christian communities and their members for creating a sense of community within large parishes, evangelizing to their neighbors, and providing social and spiritual support. The actions of ordinary laypeople, many with no more than a primary education, were especially essential during and following the post-election clashes.

"These people are not only growing the structure [of the church] but also the spiritual building of the community," Ole Mpaera says.