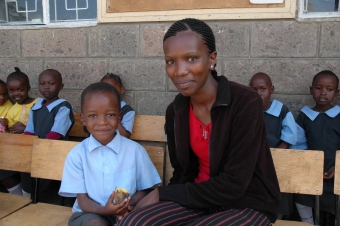 Veronica Mumbi Ndiritu is the principal at Nkaimurunya Kindergarten. She is 26, unmarried, and successful by any standards. She gave up a higher salary teaching at one of the best girls' schools in Nairobi to head the growing Catholic school, which now only has the equivalent of nursery, kindergarten, and first grade but is adding grades on each year.

"When I saw how they were living, I was so touched," she says of her first visit to the school. Having grown up wealthy enough to pursue all levels of education, she couldn't leave the children whose only meal was at school.

Just a few hours' drive away, Margaret (left), age 25, is a mother of three and was married to her husband at age 14. Margaret has four mothers-in-law. Her husband's father practices polygamy, a common practice among their Maasai tribe, along with a number of other Kenyan tribes. She and the youngest of her mothers-in-law, Ellen, have children around the same age.

These women's lives show a Kenya split between moving forward and clinging to tradition. Though only an estimated 10 percent of Kenyans subscribe to indigenous beliefs, many Kenyans still practice traditional customs, especially when it comes to the treatment of women. Along with faith, the Catholic Church promotes new ideas about women's rights.

Rape, for instance, became illegal two years ago, and concessions had to be made to get this law passed, Doctor Susan Nagele, who has worked as a Maryknoll Lay Missionary in Africa for 25 years, says. According to tribal law, for instance, 13 is the age at which a young girl is considered an adult. Lawmakers compromised at age 16 as the age standard for statutory rape. Still, rape cannot occur in marriage as a wife must do whatever her husband wants.

"I'd say more and more people know that there's a sexual defense law in the country," Nagele says. "But a lot don't. And the farther you get into the villages, the less they know."

Long before the Waki Report on post-election violence was released, the Diocese of Kitale, where Nagele works, was committed to one of its recommendations on sexual assault. A representative from the Diocesan Peace and Justice Committee had been speaking about rape in refugee camps and communities, educating people about the law and providing them with health and legal resources.

Shame prevented women such as Josephine from coming forward until much later. Josephine was raped after returning to her home. She had been kicked out of her home during the civil clashes. She sought treatment from Nagele after hearing the Catholic representative speak in her community.

Where more Western standards for the treatment of women prevail, it's in part due to faith and education provided by the church.

The difference can be seen between Margaret-the only wife of her 30-year-old husband-and her mother-in-law Ellen. The younger generation of men, who have primary school education and are Catholic, do not want multiple wives, explains Edward Naigisa, a young Maasai man. This can cause conflict if their fathers simply give them a second wife. The church has only been in Ewauso since the 1970s, so the older generation does not share the same values.

The farther out in the bush that you go, the more common practices such as polygamy and female genital mutilation are, John Fortune, I.C. says. "In any city you'll get much more mingling and therefore less of the traditions."

A Catholic nun promotes seminars she runs for young women as an alternate rite of passage to genital mutilation. Political leaders in the region often take young girls away from families if they are in danger of such practices, but it's hard to find a place for them. Fortune says that local leaders have asked him if the church could make a home for rescued girls-as well as boys who are taken away from school to herd cattle-so that they can finish their primary education.

While the Catholic Church is criticized for sexism in the West, it does fight for women's rights in Kenya, Nagele says. "The church is the one group that is sitting down and saying these are human beings, these are not property."