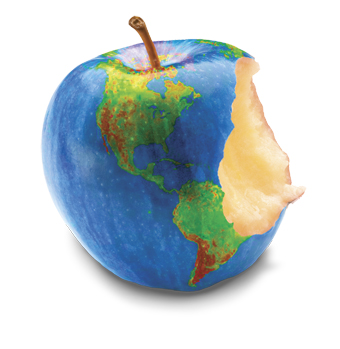 Lent is a good time to call time-out on our First World feeding frenzy.

"Eat the world” is the slogan of the food court at a high-end Magnificent Mile mall in Chicago—and it delivers. From sushi to stir fry, pasta to pancakes, all that stands between an eater and a defenseless world is the cash to pay for it. Since the slogan was once plastered all over Chicago’s buses, it was hard to escape. I still notice it most often during Lent, when I am supposed to be curtailing my own consumption of the goods of creation, though rarely with much success.

“Eat the world” could be applied well beyond the eateries of our capitals of consumption; shopping malls are merely symbols of our insatiable hunger to gobble up the earth. Whether it’s the breakneck pace at which we’re torching the planet’s stored carbon, the catastrophic deforestation of the planet to grow plants for food and fuel, or the mounds of garbage that pile up the world over, consumption truly is the American way and becoming the global one as well.

But Lent’s fasting always seems to bring us back specifically to food and the smorgasbord many in the developed world enjoy. Preachers often encourage fasting as a way of experiencing a taste of the daily fare of the truly hungry, whose meager diet is imposed rather than chosen.

I’ve always thought that approach a little disingenuous, though; I could stop eating for a week and never come close to the terror of truly not knowing where my or my family’s next meal will come from—or if it will come at all. Between my bank account and the restaurants within a block of my home, a full belly is never far away.

That doesn’t mean fasting shouldn’t be part of Lent, of course, just that we ought to think differently about it—and take it more seriously. The late liturgical writer Peter Mazar argued that Lenten fasting wasn’t so much about deprivation or social justice but about solidarity with all life: “The span of days from late winter to early spring is birthing season. Farm animals are born. Creation is at its most vulnerable,” he wrote. “Lent’s abstinence from meat sows empathy with this fledgling generation. We will not add to its struggles by butchering it.”

Such a vision is far more holistic than a mere break from eating, even for the noble goal of raising awareness about world hunger. After all, much of the natural world has been pushed to a perpetual springtime of fragility under the strain of so many hungry human mouths. Soil is exhausted and eroded, fisheries have collapsed, water that can never be replaced is being tapped to grow crops in deserts. Like so many fields chewed to nubs by too many cattle, nature is barely able to recover from our feeding. We human beings are beginning to put locusts to shame.

Humanity is indeed in need of a fast, one more radical than a skipped meal on Ash Wednesday and Good Friday or fish sticks once a week. Perhaps it is time for Catholics to take up the ancient fast that was once observed by all Christians in both East and West and is still kept by some: No meat, dairy, or eggs—nothing derived from animals (including fish) for a full 40 days.

Abstaining for so long would not only reveal just how dependent we are on our fellow creatures—and the cost in grain, water, and energy of producing so much animal protein—it would also force us to explore new, creative options of getting the nutrition we need. (Quinoa, anyone?) We may even find after Easter that our tastes have changed into something more sustainable, a diet that would leave enough to feed the rest of hungry humanity.

One ancient scriptural image of Lent is that of Noah and the animals in the ark. Half in jest, Mazar wrote of it, “What if [someone] had a sudden urge for a hamburger? It would have meant the end of cattle, forever.”

It’s time we remembered the truth of that ancient story: We earthly creatures are in this together, floating on a fragile, watery ark in a vast wasteland that extends to infinity. Though the planet and the life it sustains have incredible resilience, if we human beings are not careful, there may come a day when we have finally used up what has been entrusted to us.

Catholics have Lent as a yearly remedy to our all-you-can-eat attitudes. Perhaps this season’s call to “repent and believe in the gospel” could be summarized a little more bluntly: Stop eating the world.