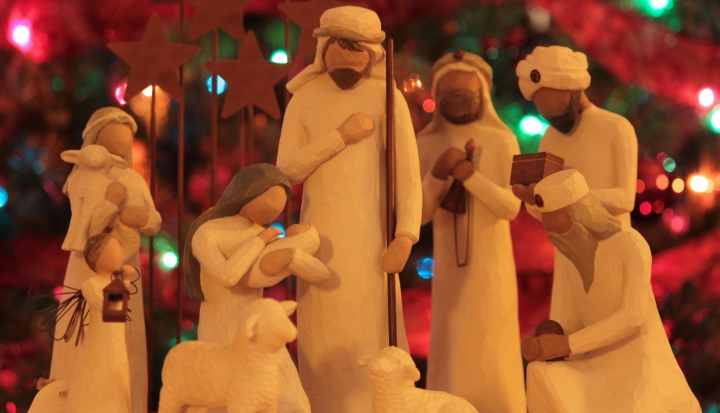 I don’t have pictures of myself sitting terrified on Santa’s lap. Despite his slow but certain infiltration into the traditional Spanish Christmas, he has never been able to dethrone the Wise Men who, flanked by pages, still sit in department stores and city squares to listen to children whose wishes they will fulfill the day after their parades on January 6.

My childhood Christmas memories have as their focal point the nativity scene, whether it was the one in my own home or the hundreds that were set up throughout the city in banks and fishmonger shops alike. One or two days during Christmas break my mom and I would go for hours to those churches and businesses known to have spectacular nativity scenes, some with hundreds of figurines, others with characters that moved, and others—my favorites—with running rivers and cascades. But the best one was always the one in my own home.

I always looked forward to Advent, not because I understood its liturgical significance but because it meant Mom and I would get out dozens of boxes and remove the newspaper-wrapped figures that made up our nativity scene. We would set up tables of varying heights, taping sheets of starry wrapping paper to the wall behind and laying yards of brown butcher paper on the tables. Then we would place the main 12-inch-high terra-cotta figures: The Holy Family, the ox and the ass, the Wise Men, and two shepherds. They all wore traditional farmers’ clothes from Colombia, where they had been crafted.

But the cohesiveness of the nativity scene, artistically at least, stopped there. The hundreds of other figures came from trips siblings had taken or were gifts of visiting friends. Some were taken from the places they held year-round in the house while others were brought out just for this occasion. Unwrapping each figurine meant unwrapping and sharing a memory of someone, learning about the world and its people, talking about siblings, and of course learning about Jesus and the circumstances of his birth.

Placing the figurines, vegetation, buildings, rivers, and lakes required time. It was a precious time to share and learn. Each element was strategically set. We did not account for size and perspective. It did not matter whether the whale took half of the lake or the townsfolk were as tall as the church tower.

What mattered was that each scene made sense in its context, and the greater context was the world. The tables of different heights provided not only the settings for waterfalls and mountains, but it also allowed us to recreate the different continents.

In our nativity scene the whole world witnessed Jesus’ birth—but it also showed me how Jesus came for all peoples of all places and times. Herod’s first-century palace overlooked an African village from the 1800s. A priest stood mere inches away from a group of witches gathered in the clearing of a forest, and the skeletons of dead musicians played music in the square of a 20th-century Pyrenees village.

The nativity scene would become our family’s focal point during the evenings of the nine days before Christmas. Each night we would gather chairs, stools, and ottomans around it, and we would celebrate a Christmas novena, a tradition also observed along with the nativity scene in other Latin countries.

This was probably the only time of the year that our family expressed and celebrated our faith together outside of Sunday Mass. The novena was a lot more than 15 minutes of prayers, readings, and songs. (I still can picture my sister playing her guitar as we were “forced” to sing an upbeat Spanish equivalent of “O Come, O Come, Emmanuel” allegrissimo). These evenings also provided opportunities to invite guests to celebrate Christmas with us and share a holiday meal.

It was 19 years ago, when I left Spain, that I last helped my mom set up the nativity scene. Some people have asked me why I do not carry on this tradition in my own home. Sure, I could set a nice, eye-catching nativity in my house, but it wouldn’t be the same. Being single, with whom would I share memories while doing it? Would my friends gather around the nativity for a Christmas novena at my home? My nativity would be nice, but I wonder if I could properly share it and my faith, which to me is essential part of a nativity scene.

With the passing of the years, my brothers and sisters also moved out of the house. The setting up of the nativity scene was left to Mom to do alone, and the yearly Christmas pictures would show each time a smaller and smaller nativity scene—that is, until my nieces and nephews were old enough to help.

Now she shares her faith, memories, and stories with her grandchildren. I suspect that for my nieces and nephews it is just a fun thing to do, like it was for me. But I also imagine that the seeds of faith that get sown in them while helping Grandma will one day bear fruit, as they have in me.