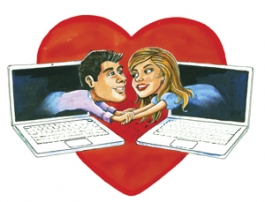 Can Catholics find their soul mates in cyberspace?

It looked like a snapshot from ABC’s The Bachelor: A doctor with dimples in his cheeks and champagne in his hand lounging in a hot tub. Buff, brainy—and single?

“Look at this guy!” she shrieked. “What a player!”

But his electronic wink piqued her curiosity, so Perkovich winked back. And 16 months later, she accepted his marriage proposal.

Online dating is no longer confined to the desperate. It’s a practical—and preferable—alternative to the bar scene and workplace for busy, mobile professionals, many say. And thousands of Catholics like Dick and Perkovich are fueling the phenomenon.

“It was inevitable,” says Mary Beth Bonacci, founder of Real Love Inc., a Denver-based Catholic singles ministry. “You’ve got record numbers of unmarried adults, most of whom are busy and wouldn’t know where to start looking for a spouse. And you’ve got this new technology that allows people from all over the world to communicate.”

The quaint dating techniques that sufficed for their grandparents and parents aren’t working as well for today’s singles, Bonacci adds. “In previous generations young Catholics who wanted to marry other faithful Catholics had a lot of options. They could get involved in their parishes, or they could just go about their business, knowing that a certain percentage of the people they met in everyday life would share their faith.

“That’s not the case anymore. The number of faithful Catholics a single person meets today is anywhere from negligible to nonexistent. So Catholics have to cast a wider net. That’s where online dating comes in,” she says.

Online dating has become a fixture in pop culture. It was the prominent matchmaker in Warner Bros. Pictures’ 2005 film Must Love Dogs and the chief subject of The Learning Channel’s 2006 TV series Log in for Love. Even celebrities are signing up: Comedian Joan Rivers created a profile on Match.com in March, joining more than 41 million Americans who will view online personals this year, Tracy says.

And yet, much to his bafflement, a slight stigma lingers. “You would think all the success would erase the stigma of online dating,” he says. “I would attach a greater stigma to meeting at a bar.”

Desperately seeking?
Some Catholics refuse to date online. Eileen Bock, a 33-year-old graduate student in Chicago, has attended weddings for couples who met online, but she still finds the prospect unappealing. “The best relationships I’ve been in have been with guys that I meet in a non-dating situation,” she says. “There was no pressure to date or impress each other, so we became friends.”

Lino Rulli, 34, former host of the nationally syndicated Catholic TV show Generation Cross, agrees. “I like my rejection the old-fashioned way: to my face. This way, at least I know who I’m being rejected by.”

Emily Gorman, a 25-year-old artist from West St. Paul, Minnesota, battled a sense of desperation when she created an online profile. “I was having one of those panicky moments where I could visualize myself as still single, 50 years old, and only buying Christmas gifts for nieces and nephews,” she recalls. “I must have sat for five minutes before hitting the ‘Enter’ button on the registration page, pondering if my act was desperation or if I was simply taking charge of my possibilities.”

Others don’t blink about it. After spending a decade in seminary, Bart Smith, a 34-year-old pilot from San Antonio, Texas appreciated what the Internet offered him: a ticket into the dating realm. “I thought, ‘How else am I going to meet young ladies? I don’t go to bars. I’m out in the country.’”

Ryan Dick, 28, was eager to replace the bar scene with cyberspace. “There’s not a lot you can grasp spending 10 minutes yelling in a noisy bar. I was looking for alternatives, so I thought I’d give online dating a shot.”

John McMillin, 60, a widower from Lompoc, California, was struggling to meet single, practicing Catholics in his age group and state. “As a purchasing agent, I’m used to going to the Internet to find all sorts of things, so I figured, ‘Well, why not a wife?’”

Men are less reluctant to date online, Tracy says; they constitute nearly 70 percent of online daters. “Their mentality is: ‘Hey, why not try this?’ Women tend to be more analytical and cautious.”

But once Jen Perkovich overcame her doubt, she immediately recognized the benefits of a cybersearch—comparing profiles and e-mails offered a rational approach to an irrational act: falling in love. “The key factors are just laid out—height, weight, education, background, hobbies, religion. It took a lot of the effort out.”

Clicking ‘Catholic’
Single Catholics have an array of online options. If dating a fellow Catholic is a preference but not a requirement, singles often join larger, better-advertised secular sites. But for those Catholics for whom shared beliefs are nonnegotiable, exclusively Catholics sites are prefered. “Then their key criterion, their potential mate being Catholic, has already been met,” Tracy says.

And the odds for overall compatibility increase, Gorman figures. “Because my faith is so extremely important to me, I believe I have the best chance in finding compatibility with others who are Catholic,” she says.

But just how Catholic is Catholic? Depends on the site.

AveMariaSingles.com is unequivocally orthodox, catering to “committed, faith-filled, marriage-minded Catholic singles,” the site notes. “Our service is only for those ‘rare’ single Catholics who do not believe in Catholic dating and who do believe in courtship and find it hard to meet 100 percent practicing Catholic singles.”

That doesn’t mean AveMariaSingles will reject your profile if you believe in the ordination of women, but you may struggle to find like-minded individuals.

Members of CatholicMingle.com, for instance, specify whether they’re seeking a pen pal, a friendship, a date, or marriage. The site asks about body type (from “Washboard” to “I should maybe lose a few”) and touches on faith (“very important,” “somewhat,” “starting to be,” or “honestly not sure”).

CatholicDaters.com takes it a step further, listing specific church teachings, including pre-marital sex, birth control, abortion, ordination of men only, and the Immaculate Conception. Members respond: “I agree 100 percent with the church,” “I agree with this teaching in principle but I question in some ways,” or “I disagree with the church.”

CatholicMatch.com takes a similar approach, asking about belief in papal infallibility and the Eucharist, among other church teachings.

That suited Smith’s style. “It narrowed it down for me,” he says. “I didn’t want to waste my time.”

Detailed profiles facilitate the “sorting” process, Bonacci says. “It can take weeks or months of ‘regular’ dating to shake out the answers to those questions. Catholic online dating gets that information out on the table right up-front.”

Personal issues like infertility or the status of an annulment are often tossed on the table, too.

A conservative clique?
So how many online daters cite 100 percent agreement with the church? A larger percentage than the Catholic population at large, it seems.

Gorman considers herself conservative in most regards, and she feels comfortable dating orthodox Catholics. But a couple men she’s met online take it to an extreme, she says. One man only attends plays with religious themes, for instance. He doesn’t discuss and dissect church teachings, which Gorman finds invigorating. “I believe in the teachings of Catholicism because I have questioned and explored them,” she says. “I’m looking for that in someone else.”

Mary O’Connor, a 32-year-old financial consultant from New York City who considers herself somewhat liberal, says CatholicSingles’ members seem overwhelmingly conservative. “Many of the men I dated were more conservative than I am, and depending on how conservative they were in certain areas, that became an issue,” she says. “It was a little difficult finding someone whose views were in line with mine.”

One 27-year-old lawyer from New York City stopped using CatholicSingles partly because the members were too politcally conservative.

Anne, a 48-year-old Toronto teacher who says she’s liberal (and asked to withhold her last name), has considered dropping her membership to CatholicMingle. “Some members are opposed to gender-neutral Bibles, holding hands during the Our Father, and are upset over being unable to find a Latin Mass,” she says. They post judgmental, harsh comments on the site’s message board, she says. “Message boards are conducive to mudslinging. There’s some really immature, unchristian behavior.”

The fact that Anne still subscribes doesn’t surprise Tracy. Only 10 percent of Americans who get frustrated with online dating end up quitting, he notes.

The ideological imbalance Anne described doesn’t surprise Tracy either. Catholic dating sites will naturally attract serious, orthodox followers. The very contents on the sites help explain that trend. Some post pictures and endorsements from priests. Others include information on pilgrimages to holy sites.

But that doesn’t mean there are no liberal members, O’Connor insists. It took some trial and error, but eventually she met the man whom she married in the fall.

From dates to diamonds
When it comes to online romances, they can move quickly.

Only five months after sending his first e-mail, Bart Smith proposed to his fiancée Frances. They wed five months after that. “Once you meet that person you believe God has picked for you, and you both have that objective, it goes pretty quickly,” Frances says. “When you know, you know. Detailed profiles enable you to skip months and months of dating.”

The nature of online exchanges can accelerate the process, too. Certain things are just easier to type than speak. The anonymity of the Internet can encourage premature personal confessions. “It’s a little too easy, when sitting alone at a keyboard, to ‘open up’ in a way that one probably wouldn’t when looking a relative stranger in the face,” Bonacci says. “The natural development of intimacy can be skewed.”

That’s what Sophia McDowell, author of The Development of Online and Offline Romantic Relationships: A Turning Point Study, discovered.

That doesn’t mean Catholic online daters are advancing physically as quickly as they are emotionally, Bonacci notes. Still, a person should heed an appropriate progression in both arenas, she says.

“Many couples get married having spent a lot of time together, but never really discussing the issues that matter. Online couples have frequently discussed the big issues ad nauseam but haven’t spent a lot of time together in person. So their challenges revolve around adjustment, personal habits, etc. They sometimes need help being together,” she says.

The divine online
For believers in online dating, there’s no doubt that God guided their cyber romances. “There was definitely some divine intervention,” Perkovich says. “I truly feel that I’ve found my perfect match.”

Bart Smith feels the same way—and he encourages singles to log on. “Online dating enables Catholics who cherish their values to more easily find soul mates who share them.”

Smith’s nightly prayers to the Sacred Heart were realized in cyberspace, he told his grandmother. “She hardly knows what a computer is, so she was pretty amazed.

Christina Capecchi is a recent graduate of Northwestern University's Medill School of Journalism. She is the author of the young adult column "Twenty Something," which runs in diocesan papers around the country.