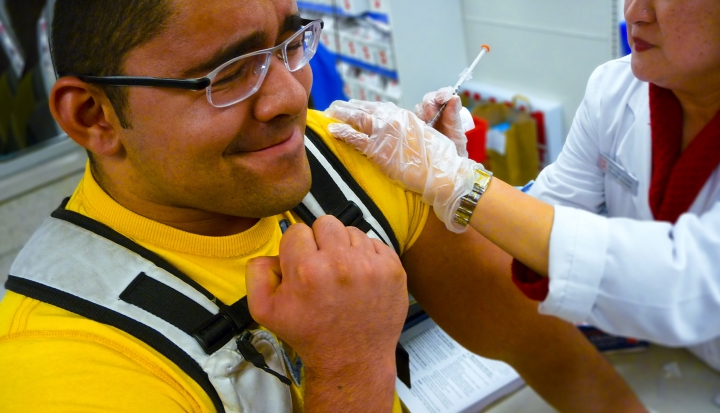 A number of years back, I worked for a stint as a hospital chaplain. I worked in a number of different "units," from antepartum to the NICU to hospice. I also worked in a children's hospital for about a year. I remember walking around the NICU and marveling at the gifts that modern medicine has given us–babies who would not have had a chance even 15 years ago could grow into toddlers. But it wasn't just babies in NICU. It was also children with cancer or other chronic illnesses. Children who, in a different lifetime, would have had lives cut short. They and their parents were given more time together.

These are the children that I tend to remember every time I read about vaccines, which seem to be coming up a lot in my news feed lately. In particular, pertussis outbreaks have reached epidemic proportions in California. There have also been outbreaks in other parts of the country, and the trend does not appear to be slowing.

It's also not just pertussis. Measles is another childhood illness that had been declared eradicated, but looks like it is making a comeback, especially in more affluent, well-educated communities. There are a number of complex scientific and sociological explanations for why these outbreaks are happening, but one part of it is that parents are not vaccinating their children, and adults are not getting boosters. When a the percentage of a population drops below a certain point, a pathogen is more likely to spread. Therefore, as larger swaths of the population are going without vaccination, illnesses spread more easily and more quickly.

People cite a variety of reasons for not getting vaccinated, or not getting their children vaccinated. One of the most widely talked-about reasons is the now-debunked theory that certain vaccines cause autism. Beyond that very specific fear, some parents cite fear about chemical injections, or a general suspicion of the medical or pharmacological industries. In Catholic circles, you might also hear about certain vaccines that have a distant link to cells from aborted fetuses. Whatever the reasons, the number of people refusing vaccinations is on the rise, and we are seeing the result in the outbreaks of illnesses that we had not seen for more than a decade.

In 2008, the Vatican urged caution for parents who were deciding against vaccinations because of the connection to fetal tissue. "We are responsible for all people, not just ourselves," Msgr. Jacques Suaudeau, a medical doctor and official at the Pontifical Academy for Life, told Catholic News Service.

And this, for me, is what it boils down to. Vaccinatins are not simply about personal health. They are not just about my kids. Vaccinations are about living in community. Those of us who are healthy might be well enough to fight off a potential infection from measles or pertussis. However, those kids who are in the hospital–the babies born early, the kids with chronic illness–they are the most vulnerable among us, along with the elderly and other immune-compromised people. So as we make decisions for our own children and for our own families, we should keep in mind those people and their families, and remember the common good.