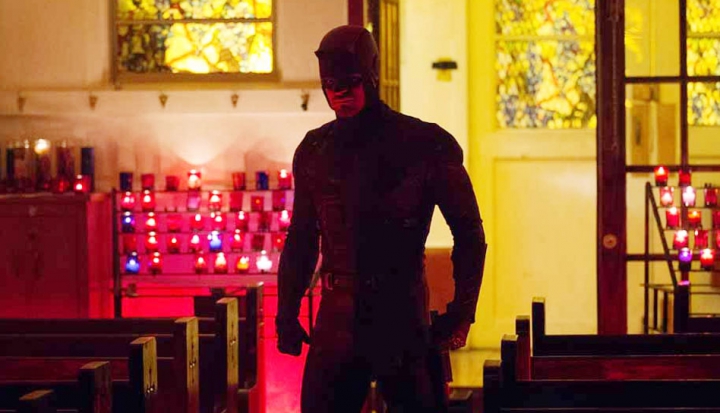 Today Netflix releases the second season of their critically acclaimed Marvel Comic Daredevil series. And, most likely, this will immediately result in a night of lost sleep as I binge watch most of the episodes.

For those of you who don’t know, Daredevil is the superhero who prowls Hell’s Kitchen in New York City, protecting it from evildoers. His real identity is Matt Murdoch, a blind lawyer who—along with partner and best friend, Foggy Nelson—fights injustice in the courtroom. Interestingly enough, Matt is a devout Catholic. Conflicted, yes, but he still believes, and that struggle plays an essential role in his mythology.

Many fans and industry insiders have written about Matt’s struggle to reconcile his faith with being a vigilante. It’s old news. However, to me, that is not the most interesting part of Daredevil’s Catholicism. Instead, what I find compelling about his story is how through suffering Daredevil is redeemed and turned into a hero who seeks to save his city.

Down through the centuries and generations it has been seen that in suffering there is concealed a particular power that draws a person interiorly close to Christ, a special grace. . . . A result of such a conversion is not only that the individual discovers the salvific meaning of suffering but above all that he becomes a completely new person. He discovers a new dimension, as it were, of his entire life and vocation.

The closer you draw to Christ, the more actively you participate in his weakness and suffering on the cross. But, at the same time, you are participate in Christ’s triumph over sin and death; you are made stronger. Within suffering, then, is a transformation. When we suffer we become something different, something refined and holy. It’s an echo of what St. Paul says in the first chapter of Colossians about his suffering for the church:

I am now rejoicing in my sufferings for your sake, and in my flesh I am completing what is lacking in Christ’s afflictions for the sake of his body, that is, the church. I became its servant according to God’s commission . . . to make the word of God fully known (Col. 1:24–25).

There is a line in the second episode of the first season of Daredevil that reveals some of Matt’s motivations. Left dying from wounds after a fight, he is rescued by a nurse. They argue, and she says, “All I know about you is you can take a huge amount of suffering without complaining.” Matt smiles and says, “Well, that part is my Catholicism.”

In that small teasing statement, Matt exposes not only his faith, but also his reasons for becoming a hero. Daredevil is set apart from other superheroes because his power does not come from his strength. Instead, in many ways Matt is even weaker than most people.

When he was a kid, Matt shoved an old man out of the way of a speeding truck. The truck crashed and toxic waste spilled into the street, injuring Matt, who was unable to get out of the way in time. He is blinded, but exposure to the waste also gives him extra-sensory abilities.

His new abilities cripple Matt and make him weak. He can’t control them and he is left to suffer, friendless and isolated, through a constant barrage of noise. But, with the help of his father and, later, his mentor Stick, he learns that if he stops being afraid of the pain, he can transform his weaknesses into strengths. By embracing his suffering instead of running from it, Matt quickly hones his abilities and becomes a crime fighting weapon. His radar sight helps him move in the dark and his hearing allows him to find an enemy before they even know he is near.

But the choice to use his suffering for good is ongoing; it’s not limited to one point in his life or to one decision. In the first season, Matt chooses to abandon his path when he decides to kill Fisk—a crime lord who seeks to destroy and rebuild Hell’s Kitchen. But in their first fight, Matt fails to kill Fisk and gets beaten to the point of death (again).

When he recovers, guilty over his decision to turn toward retribution, Matt goes to his priest to confess. The priest forgives him and, ultimately, sets him back on his transformative path. When the two opponents meet again, Matt refuses to kill Fisk. Again, he has learned from his suffering and been redeemed. In the words of St. Pope John Paul II, “He discovers a new dimension, as it were, of his entire life and vocation.”

As I think about Daredevil’s transformation from helpless victim to vigilante to advocate, I think about my own attitudes toward suffering. Every time I walk into a church, I gaze up at the crucifix. It hangs there so we can contemplate the suffering endured by God on our behalf. Christ on the cross is God at his weakest, full of sorrow, pain, and what looks like defeat.

But, the crucifix isn’t just the memorial of Jesus’ public execution. It also represents a victory over death, hell, and the grave—a victory that could only be accomplished through suffering. And, for Christians, the only way to gain that victory is to embrace the cross and suffering first.

Daredevil is a great visual representation of that truth. Matt keeps getting up and fighting for others despite the horrible pain he knows will soon be coming. He doesn’t do it because he likes pain, but takes the suffering because he loves his city and wants to see it—and himself—transformed.

The Murdoch family motto is, “It’s not how you hit the mat; it’s how you get up.” We have all experienced suffering that makes us not want to get up. We shy away from the pain; it is hard to be want to fight again. It’s a natural inclination and, many times, the right decision.

However, Christians are sometimes called to embrace suffering for a higher purpose. Maybe so that we can be transformed. Maybe because we are called to work for justice on behalf of someone else. In those times, we are called to get up, bloodied and bruised as we are, and embrace our pain. And when we do, we are promised that Christ will be with us.