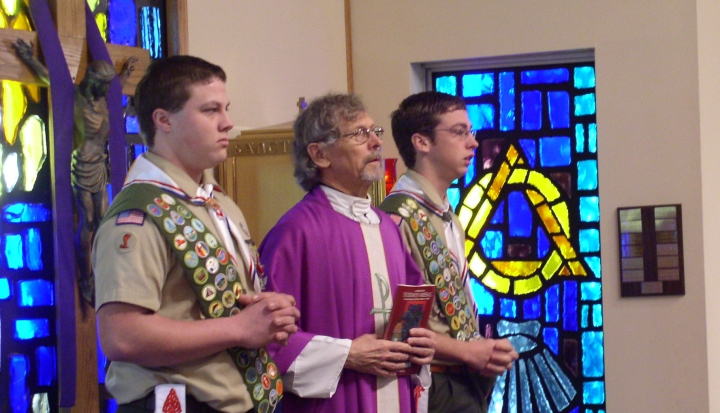 You just had to know that the Boy Scouts of America's announcement that they would no longer deny membership on the basis of sexual orientation–meaning that openly gay youth can now be part of the Scouts–would be trouble for the Catholic Church. And those leading the church still don't seem to know how to react.

Scouting has long had close ties to the Catholic Church, and many of the church's current priests and bishops were themselves Boy Scouts. There are nearly 8,400 Catholic Scouting troops and more than 273,000 Catholic youth in the Scouts. Many dioceses and parishes have strong scouting programs as part of their youth ministry efforts in conjunction with the National Catholic Committee on Scouting (NCCS), and the church has long endorsed the values the Scouts teach. But, well, we know how the church feels about people who openly express same-sex attraction.

While some religious groups have quickly cut ties with the Scouts, the Catholic Church has been more careful to find a balance between their stance on homosexuality and their deep connection to the Boy Scouts. The Archdiocese of Denver didn't prohibit parishes from continuing in scouting, but did strongly caution those who choose to remain involved. The bishop of Arlington, Virginia said he's looking into the matter, but did express that he "deeply regret[s]" the "disappointing" decision, saying the Scouts have strayed from the values they once taught.

NCCS chairman Edward Martin issued a letter last week trying to sort things out by explaining what exactly the Boy Scouts decided, what the church teaches, and why the two are not necessarily at odds. Bishop Robert Guglielmone, episcopal liaison to the NCCS, doesn't seem happy with the decision but seems to think the church can live with it. And as Guglielmone told Our Sunday Visitor, many Catholic families are going to stick with the Scouts no matter what the church says, so at least if the church maintains its institutional connection to the Scouts they will still be able to offer a Catholic voice to those who stay.

In the end, individual families will have to decide whether or not they can continue to support the Scouts. It wouldn't surprise me to see a new organization quickly start up to welcome former Boy Scouts–much like the American Heritage Girls emerged as an alternative to the Girl Scouts–and those who can't accept the new BSA policy will gravitate to that new entity.

But Guglielmone has hit on the real problem here, which is that this issue is pitting two things against each other that many people feel very passionate about. Some families, no matter how much they love scouting, are going to leave it behind because of their deeply held beliefs on sexuality. Others, no matter how they feel about same-sex attraction, just can't give up their affiliation with the Scouts. And others, feeling that the organization they've long supported has abandoned them by adopting a policy they personally disagree with, with remain caught in the middle–just like the leaders of the church.