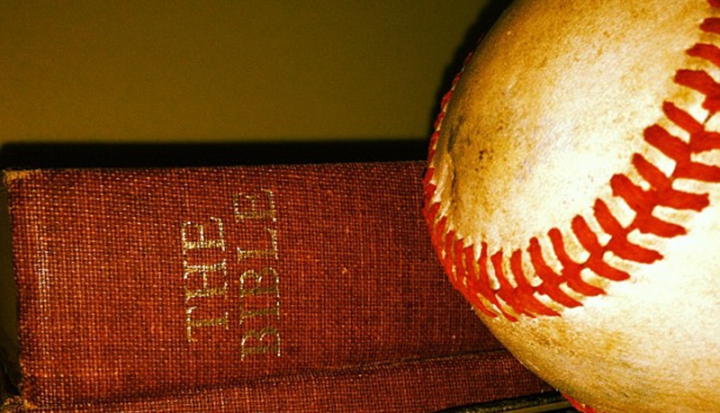 I often joke that I came out of the womb wearing a Cubs hat. I was born in New Hampshire into a family of Chicago Cubs fans on November 9, 1992. Three months later, I was baptized.

I chose neither of these things. But before I could walk, talk, or seek a rational alternative, both were part of my temporal and eternal destiny. Cradle Catholic. Cradle Cubs fan. My ancestral birthrights.

Growing up rooting for a team that had last won the World Series in 1908—the same year the Ford Model T was unveiled—often felt like an exercise in futility. Maintaining faith in the Trinity, professing the resurrection of the body, and placing trust in a higher power are often equally daunting. All the same, being Catholic and being a Cubs fan are as ordinary to me as wearing shoes. Heavy wet shoes, but still.

As a kid, I joined my parents at church every Sunday. Like most children, I was too young to evaluate my faith, to question the complexity and the legitimacy of theism, or to understand the full implication of those latter stations of the cross—where things get fairly bloody. Likewise, at a young age I was draped in Cubs paraphernalia and accompanied my parents and grandparents on a pilgrimage to Wrigley Field. It took me a while to discover that this, too, was a lesson in agony.

By adolescence I carried these two C’s of my birthright with a stubborn resignation. Catholic. “Practicing?” people would inevitably ask. My response: “I have to practice. I’m not very good at it.” Cubs fan. “Seriously?” people would ask sympathetically. “Too seriously,” I would admit from a near empty bandwagon, year after year.

By that fall the Cubs had posted the best record in the National League. They were primed for a postseason run, and sports media across the country couldn’t help but predict that the Cubs would win the World Series after an astonishing 100-year title drought. They were featured on the cover of Sports Illustrated and, as a naïve 15-year-old, I believed they might finally break their curse.

They played the Dodgers in the first round of the playoffs and lost the first two games of the series. On October 4, the Cubs faced elimination and trailed 3–1 heading into the ninth inning. My parents had both already stopped watching, having endured too many years of disappointment to once more witness what they knew was inevitable. So I retreated alone to their bedroom to watch the final inning.

I was sick with fear. Desperate, I looked around the room and spotted a rosary on my mother’s nightstand. As Alfonso Soriano came to the plate, I started praying. I prayed Hail Marys at such speed that I’m sure even the Blessed Mother couldn’t comprehend the words.

Strike one. My sweaty fingers raced over the beads in an effort to save the Cubs. I completely skipped the sorrowful mysteries and the prayers between each decade.

Strike two. Now with even greater ferocity, I scrambled to finish the rosary. Swing and a miss.

Strike three. The Dodgers burst from their dugout. Series over.

It was irrational, immature, and selfish to think a ninth-inning rosary might compel God to intercede on the Cubs’ behalf. Still, though I was too distraught to realize it then, the seeds of faith were growing somewhere within me as Soriano struck out. Those seeds were likely growing even before my baptism, but the Cubs’ predictable collapse in 2008 offered me an opportunity to realize my faith and was an invitation to cultivate it in the years to come.

The following April, on opening day, I reaffirmed my faith in the Chicago Cubs. One month later I chose to be confirmed in the Catholic Church. As a sophomore in high school I independently decided to maintain the beliefs to which I grew up blindly subscribing. I chose to be confirmed because I was acutely aware that my faith—while difficult to understand even today—was an undeniable aspect of my being.

Did the Cubs compel me to be confirmed? No. But my experience watching the Cubs lose informed my discernment and encouraged me to explore my spirituality.

Every Sunday I hear the priest proclaim the mystery of faith during the memorial acclamation. As we proclaim the fact that Christ, by his death and resurrection, set us free, I reflect on what it means to believe in something for which little tangible evidence exists.

I place enormous trust in a higher power whose presence I have felt but never seen, just as I continued for two decades to believe in a team that has cruelly disappointed generations of fans before me.

Then came last season. I was prepared, like all the souls who had gone before me, to keep waiting, to keep believing. I had faith that the Cubs would win the World Series in 2016. Or, if not in 2016, then in 2017, or at the very least probably before I died.

And then, on All Souls’ Day, November 2, 2016, the Cubs took the field against the Cleveland Indians in game seven of the World Series. They had won the pennant for the first time in 71 years. Then they had stumbled. Then had breathed again. Now having overcome a 3–1 World Series deficit, they were nine innings away from ending the 108-year drought.

Even when they jumped out to a 5–1 lead nobody in my family was at ease. When Kyle Hendricks left the game in the fifth inning and the Indians scored two runs off a Jon Lester passed ball, I got a text from a good friend of mine—a priest: “Time to break out the rosary beads.”

I replied that the beads had been in my pocket since the third inning.

Then he sent me another text: “All those souls in purgatory are interceding. They know that after a certain amount of waiting, it’s time.”

By then it was midnight on the East Coast. My dad couldn’t watch. He took the dogs for a walk. A long walk. My head was once again buried in a pillow in disbelief.

Then it came. A miraculous Midwestern storm front that will likely go down as the most legendary rain delay in Cubs or baseball history. Seventeen divine minutes of rain that ESPN’s Mike Wilbon described the next day as 108 years of Cubs fans’ tears falling down from heaven.

After those tears, a Ben Zobrist double in the top of the 10th gave the Cubs a lead. I clutched rosary beads as the Indians battled back to within a run in the bottom of the 10th, and then after raucous jubilation and a toast to my great-grandmother, my family proclaimed over and over again, “The Chicago Cubs won the World Series!”

Some days I still wake up and say it. Why not? After all, each Sunday I proclaim the mystery of faith. It’s as ordinary as wearing shoes. Light, airy ones—with ephemeral wings on the sides.

Editors’ Note: This essay was originally published during last year’s season. It has been updated to reflect the Cubs’ 2016 World Series title.

Jay Bouchard is a freelance journalist and currently an editorial fellow at Outside Magazine in Santa Fe. He recently earned his Master’s from Northwestern University’s Medill School of Journalism.