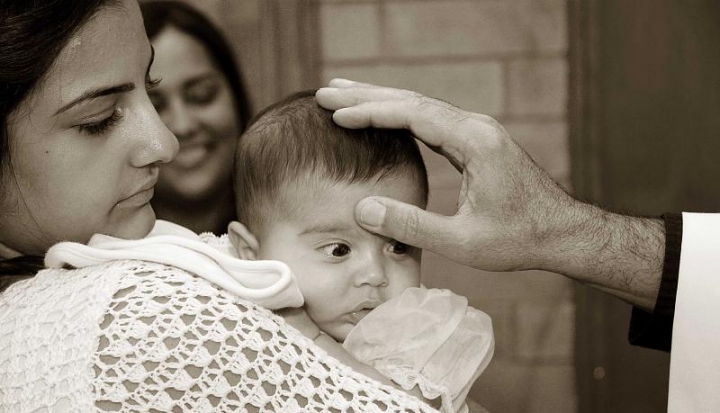 My son turned 2 this summer, and over the past year he has expressed a keen interest in church. And when I say that he has expressed an interest, I really mean that he has started to lead our little family on a journey of faith that I had never before imagined for us. It started with his pointing out crosses. Sans serif, lower-case t’s demand his attention (and ours), as do graphicly hip plus signs, ornate crucifixes, and the simple stone crosses on the church we drive past every day to and from his daycare. (I asked him if he knew who was on the cross carved into the front of a church he fixated on last week; he thought for a moment and then responded in an almost reverent whisper: “God.”) He processes around our house with a church bulletin he brought home from Mass one Sunday (it has a cross on the front). And then there are the “Alleluias,” which he loves to chant from his car seat between the ABCs and “Twinkle, Twinkle, Little Star.”

It’s this kind of churchy behavior that elicits raised eyebrows of both amusement and insight. In the moment, it almost always produces loud laughs, followed immediately by quiet gasps of wonder: My wine with dinner is “budachist” (that’s “blood of Christ” in toddler), while his arms and legs, which we point out and name, make him think aloud, “buddychist” (“body of Christ”). The outdoor Mass our parish celebrates in the summer is “big church,” and just this weekend, when a group of college students lined up at the counter of the relatively empty restaurant where we’d been eating dinner, he started calling out, “Church! Church! Church!” “Does he think they’re lining up for communion?” my husband pondered.

I blame his baptism, which we celebrated two days after his first birthday. We delayed the celebration (by Roman Catholic standards) for practical reasons. His birthday was already an occasion to have out-of-town family together; why not celebrate birthday and baptism on the same weekend? There were spiritual reasons, too: that first year of his life wasn’t particularly churchy for us. Beyond the ever-changing nap times that seemed to always compete with Mass schedules, my husband and I weren’t sure how—or, to some extent, if—we’d pass on our Christian faith. We needed some ongoing conversations before we could celebrate what I believe is our most important sacrament. Our son’s baptism couldn’t be a rote ritual of water and oil, but one that would say something about who we are as individuals and as a family within a larger community.

We wanted that community to challenge and inspire him in ways that his parents and immediate family could not. I wanted that community to help show him meaning in his life, to move him ever out of himself and orient his life toward the good. We wanted to “give him a story,” as the presider and preacher at the celebration so perfectly put it. But we wanted it to be the right story.

When we met with the priest about the baptism early one morning over pancakes, eggs, and diner coffee, we regrettably had more to say about the negative experiences of church we wanted to avoid. Our priest had to coax out of us our positive intentions: what we wanted to convey to our son about who God is and how God could fit into his life. Wonder, mystery, justice, community, and beauty were words we kept returning to.

Of course, all of this meant we’d have to rethink our own faith and move it back out of the places we’d been letting it sit, fairly frustrated, mostly unchallenged, and frankly starting to evaporate. We’d have to find a community. Church, we agreed, isn’t something we just do on Sunday mornings. It’s who we are, and we were going to have to be that community we wanted for our son–for others, too. His baptism, we realized, would be an opportunity to renew our own.

But that’s not where we started, even though our personal theologies and spiritualities (especially mine) are, in fact, that ambitious. We have fairly “churchy” backgrounds—my husband grew up the son of Methodist minister and went to Wheaton College; I was heavily involved in Catholic campus ministry in college and have a master’s degree in theology. This accounts for some of our ambitions, but that all-or-nothing approach hadn’t served us well for almost a decade as we “searched” for the right community. We now had a deadline: our son’s first birthday. So we picked a place with some personal connections and just did church on Sunday mornings when we could. We kept it simple. We’d go, come back, and not worry about what it all meant. At the very least, this was a regular hour we’d commit to spending together as a family.

Recently, I was lamenting to a friend over what I thought was someone else’s theological misunderstanding and my frustration over how commonly misunderstood God is. I was anxious about how to respond correctly. “Don’t you think God can take care of Godself?” my friend asked. Indeed, suspending the preposterous notion that I might be personally responsible for making sure God is understood correctly (or being celebrated correctly, prayed to correctly, etc.) is exactly what freed me up to just do church on Sundays.

Funny thing, “just do church on Sundays.” Liturgy well celebrated has a powerful effect on me and, to an extent, my husband, and this place had it down. The small but thriving community welcomed us warmly, in a normal and not desperate way. Eventually, we stuck around for coffee hour, and before we knew it we were accepting invitations for adult faith formation discussions. Now we attend parish picnics willingly and wish we had time for evening prayer with our community. And we have a 2-year-old who processes and chants and requests prayers before bedtime. Our immersion in this community has all been a result of my son's baptism.

Some have remarked that my son’s churchy behavior is a sign that he’s going to be a priest or a bishop. It’s a tricky “compliment” to navigate, especially because it’s impossible to deny something is happening here. But maybe he just takes his baptismal priesthood seriously and sees God at work in people and places most of us are too distracted or busy to notice. The community we baptized him into has been crucial for that—especially in our liturgical celebrations and the fellowship that we keep immediately after and throughout the week. He encounters something special every week: a celebration of communion.

His father and I aren’t as intentional about teaching him to pray or telling him stories from scripture as we probably should aspire to be. But I also believe our community picks up the slack just by being present in his life. And there’s still plenty of time both for scripture discussions and memorized bedtime prayers and for when my shout of “Let’s go! We’re going to church!” is less of an incentive for him to put on his shoes and more of a reason for him to drag his feet. Thanks to our community, I see so much more clearly how God is at work in mysterious and wonderful ways. I don’t worry whether my husband and I are going to get it perfect all on our own. Our intentions are still ambitious, but God can take care of Godself. I trust that my son will encounter God—regardless of our intentions.

We have a small wooden cross I brought back from a 2002 trip to the Maryknoll community in Oaxaca, Mexico. It’s neon pink and hand-painted with carefully articulated vines and tiny white flowers. I pulled it out one night and gave it to him after he’d been pointing out crosses. He immediately held it above his head and walked from bedroom to bedroom sing-shouting “Alleluia!” He walked into the floor-to-ceiling tipi his father constructed for him, flicked the cross as if to sprinkle holy water, and said “Bless you” and “Amen” before walking out and moving on to the bathroom, the bedroom, the stairwell. “Bless you, Mama,” he said pausing before me, and “Bless you, Papa,” to my husband. Certainly he was mimicking what he’s seen at the other baptisms we’ve celebrated in the past year, but I’m not sure what compelled his little reenactment that night. Perhaps he just thought it was time to renew our family’s baptism.