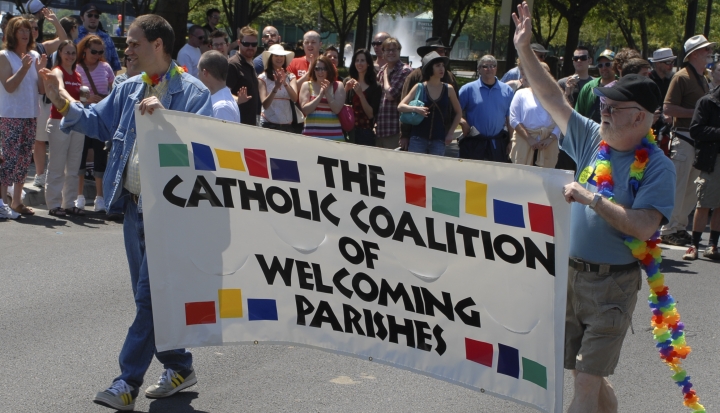 This weekend marks the annual Portland Pride Parade in Portland, Oregon, and as usual, several of the city's Catholic communities will be on hand. Four parish communities are expected to march in the parade this year, all carrying banners representing their parishes.

One of them is St. Andrew Parish, a Portland community with a long history of supporting and welcoming Catholics who experience same-sex attraction. The parish has been marching in the Pride Parade since 2001, carrying a banner that reads "Welcoming the Whole Family." But, as The Oregonian reports, this year their involvement was in jeopardy when Portland's new archbishop, Alexander Sample, reportedly told the parish that they could not march in the parade as a group representing a Catholic parish (he was OK with parishioners marching as individuals, though).

In response, the parish discussed the archbishop's request and, with the consent of their pastor, essentially said, "thanks for your opinion, but we're still marching." So St. Andrew will continue their tradition of participating in the parade this Sunday as a parish, even if the archbishop isn't happy about it.

This story is a good example of the kind of experiences that LGBT Catholics have in their church today, as different priests, bishops, and church leaders will often give them very different portraits of how welcome they are (and some bishops' comments would make even straight Catholics who are supportive of their LGBT brothers and sisters feel unwelcome in the church). That's probably why, as Pew Research Center finds in a new report released yesterday, LGBT adults are in general less likely to be affiliated with a particular religion than the overall population.

But 51 percent of respondents to the Pew survey said they are members of a religious community, and 26 percent of those say they are Catholic. Among LGBT Catholics, two-thirds say the church is "unfriendly" to them while only 6 percent say the Catholic Church is "friendly" to the LGBT population. Of all survey respondents, roughly 80 percent called the Catholic Church unfriendly to people of their sexual orientation.

What those results tell us is that there are far too few communities like St. Andrew in Portland. In spite of their bishop's objections, the community has made the same commitment that all Catholic parishes should make: To stand with Jesus by welcoming one and all and showing God's love to everyone–especially those on society's margins.