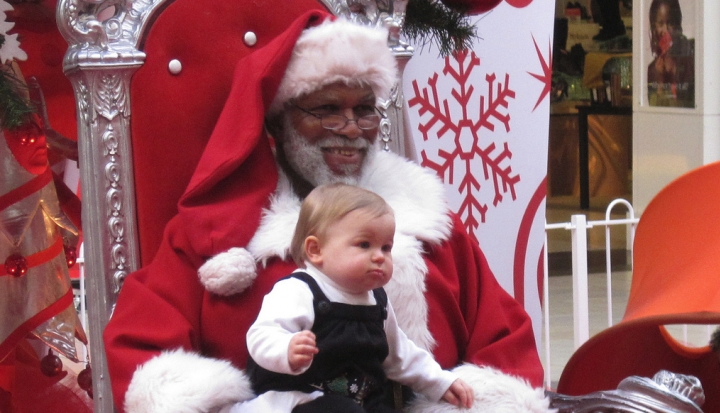 A piece by Aisha Harris in Slate recently argued that instead of old white man in a red suit coming down the chimney, we ought to make Santa over as a penguin. An African American, Harris describes feeling uneasy growing up with the two Santas in her life, the black Santa at home and the white Santa everywhere else. Her dad tried to reassure her that Santa was all colors, shape-shifting so that he would be familiar to every child he visited. Young Harris did not buy it; white Santa was real, and her Santa was a knock-off. Penguin Claus would solve these problems, providing a beloved holiday figure that did not exclude anyone.

Fox News grinched this idea, because as host Megyn Kelly whined, “Santa just is white.” She acknowledged Harris’ childhood sadness, but then argued that in the face of history, kids need to suck it up: “Just because it makes you feel uncomfortable doesn't mean it has to change. Jesus was a white man too. He was a historical figure, that’s a verifiable fact—as is Santa. So, how do you just revise it in the middle of the legacy?”

Let’s consider those verifiable facts. In 2008, British anthropologists did a facial reconstruction of Saint Nicholas of Myra, based on his remains. The fourth-century bishop who signed the Nicene Creed looks less like Clement Clarke Moore’s description and more like the cabbie who drove you to the airport to catch your Christmas flight home. Standing barely five feet tall, Saint Nicholas was more likely to be confused with one of the elves than with Santa.

As his reputation for holiness and charity spread, Saint Nicholas became the patron of children, prostitutes, and sailors. The early church promoted this last devotion to displace veneration of Poseidon, the Greek sea god. His cult became more popular in Western Europe after Catholics stole his relics from their Orthodox brothers, moving them from what is now Turkey to Italy. In Medieval England, December 6, the feast of Saint Nicholas, saw the election of the boy-bishop, who ruled a topsy-turvy world where children dressed in liturgical garments and gave orders to adults. Adding to the mayhem, nuns, who were strictly cloistered, snuck out at night to anonymously deliver presents. The fun ended on December 28, the feast of the Holy Innocents.

After winning their independence from Spain, Dutch Calvinists tried to stamp out Saint Nicholas celebrations, complaining they were nothing more than an excuse for disorder and drunkenness. But in the 19th century, a nationalist and secular Saint Nicholas sailed back into Dutch life aboard the marvel of the modern world, a steamboat from Spain. Today, it is the Dutch tradition of Saint Nicholas’ sidekick that is causing controversy. Black Pete is a man in blackface dressed as a page and guiding Saint Nicholas’ horse. According to some versions of the Saint Nicholas story, Pete’s face is black because it gets covered in soot after he peers down the chimneys to check on children. Other versions of claim the original Pete was a bad guy who tormented naughty children, before teaming up with Saint Nicholas. The most prevalent understanding, though, is that Pete is Saint Nicholas’ slave. In a modern cosmopolitan country with a growing immigrant population, more people are starting to oppose the Black Pete tradition and ask that he not be part of Saint Nicholas celebrations.

Horses, slaves, steamboats, sailors, prostitutes, children, nationalist claims, and interreligious strife—17 centuries of Saint Nicholas tradition has absorbed a lot in the service of the message that Saint Nicholas, by his pastoral leadership and charity, helped spread: “Fear not; for, behold, I bring you good tidings of great joy, that shall be to all the people. For, this day, is born to you a Savior.” So next, dress your child as a bishop and wait for Penguin Claus. It isn’t a sacrilege against tradition, it is writing tradition’s next chapter.