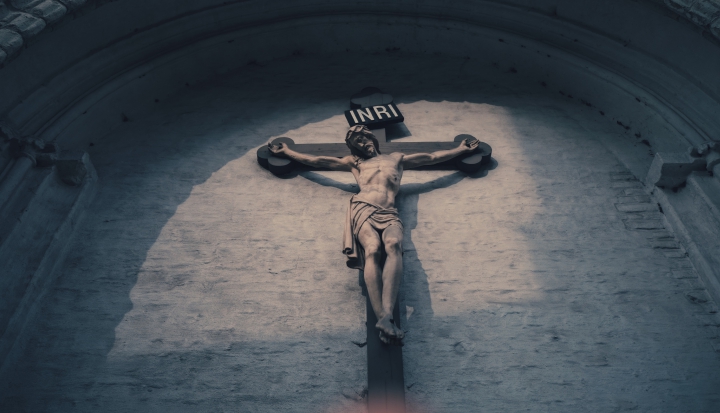 “Rudolph the Red Nosed Reindeer” blares from the Echo Dot sitting on our kitchen counter. We listen to it so much, my 3-year-old daughter Dahlia perfectly mimics the announcement of it in that sing-songy computer voice of Alexa’s. “‘Rudolph the Red Nosed Reindeer’ by Gene Autry,” they report in unison, with the first syllable in Autry drawn out as though Alexa might be a little Southern. It’s the 11th time we’ve listened to “Rudolph” today, which would be fine but for the fact that it’s March and we’re in the middle of Lent.

So when my Rudolph-obsessed daughter asks about what those mean men are doing to Jesus in the Stations of the Cross surrounding the perimeter of our church, I seize the opportunity to bring her forward in the church calendar.

On a Friday evening, we walk under the scaffolding that climbs to the ceiling of Saint John the Baptist where improvements to the roof and ceiling are underway. The scaffolding makes me aware of how impossibly high the church ceilings are. I clutch Dahlia’s hand as though I might stop her from falling though our feet are firmly planted on the green and ivory tiled floor. The church is quieter than on Sundays and the lights dimmed.

“Why is it so quiet?” she whispers.

“People are praying. They’re thinking about how Jesus died.”

“Where?” she asks, spinning her little blonde head left and right looking for a bed or a kitchen.

“No! I want to see the REAL Jesus,” Dahlia declares much louder than is appropriate. Several in the congregation of 15 or 20 people, most of them over age 60 with graying hair and heavy coats, turn and smile us.

“Jesus died and went to heaven,” I whisper. “Wait. Here comes Father.  He’ll explain it.” Father enters from the right of the altar and with a bow, begins the stations of the cross. I hand Dahlia a First Communion book that has pictures of the stations to follow along.

“We adore you, oh Christ, and we praise you,” Father intones.

Kneeling, we respond, “Because by your holy cross you have redeemed the world.”

Dahlia shifts around noisily in the pew, flipping through the book and listening fitfully. “Mama!” she whispers after Father has announced Jesus is condemned to die. “I don’t want Jesus to die.”

“Why?” her little face is soft and open, but her brow is furrowed with confusion.

I pause because that’s probably the best question ever and I have no idea how to answer it. “Because it was written” is not going to fly with a 3-year-old. How do I explain Jesus’ death in a way she’ll understand? Lifting her up into my arms, I pull her in close to me, our cheeks touching.

“See that picture?” I ask, pointing to the third station where Jesus falls for the first time. In it, he is flanked on one side by a soldier whose face is rent in active rage, and another whose arm is coiled back ready to strike. “Those men are angry because Jesus said he was God’s son. They didn’t like that he was so powerful. It scared them.”

Dahlia is quiet for a moment, looking from the Station to Father. She spins around to investigate what’s happening in the other Stations. “I don’t want Jesus to die,” she says again, clasping her hands around my neck and looking a little more worried than a 3-year-old probably needs to. I want to introduce her to the whole life of Jesus; I’m just not sure we need to spend too much time on this part just yet.

Quietly, I turn us around and point to the last station. “Look at that one,” I whisper. “Guess what happens after that one?”

“What?” she asks, brightening.

“And Easter egg hunts?” She asks.

“Yes,” I whisper, pulling her ear in close to my lips so I can whisper without bothering the stations still going on around us. “They put Jesus behind that rock, but he was too powerful. He rose up out of it to live in heaven and because he did that, we can live in heaven with him some day. On Easter, we celebrate that.”

Okay,” she says and then repeats, “And we get to have Easter egg hunts.”

“Yes, and we get to have Easter egg hunts.”

She wriggles down from my hold of her and flops down on the pew where she is mostly quiet for the rest of the stations, but for her boots tapping out a tune. At the end, Father genuflects and exits through the side he came in. There is the rustle and thumps of books returning to the pew. Dahlia turns and tilts her head back all the way as her eyes climb the scaffolding behind us.

“I want to climb up there,” Dahlia whispers, pointing all the way up.

“Okay,” she says. Relieved to be free of the demand for quiet, Dahlia hops down from the pew, skips beneath the scaffolding, and catapults herself into her red stroller waiting out in the lobby. On the way home, the stroller wheels bounce over bumps in the sidewalks. In the brisk cold air, Dahlia hums “Rudolph.” Lent, with its high drama, angry soldiers, and Jesus rising from the dead, has enough going for it to get a 3-year-old’s attention, but for now, it would seem she’s sticking with Christmas and Rudolph.