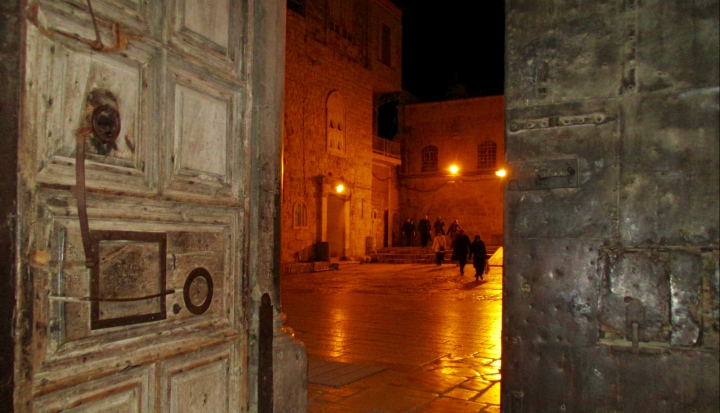 From January 17 until January 27, U.S. Catholic and Catholic Theological Union are cosponsoring a Holy Land pilgrimage that is led by CTU’s eminent scripture scholar and Jerusalem expert, Franciscan Father Leslie Hoppe. U.S. Catholic’s popular scripture columnist Alice Camille is also accompanying the group and leading prayers, reflections, and discussions. She is filing blog posts from the trip. Here is a recap of the group’s day at the Church of the Holy Sepulchre:
“360 degrees of WOW.” That’s the ad campaign for a popular California tourist attraction. But the Church of the Holy Sepulchre in Jerusalem has that beat by a complete rotation or two. The wow factor is in the audacious claim that Jesus Christ, son of God and lynchpin of Christian faith, was crucified and subsequently buried on this spot or thereabouts. Multitudes come annually, queuing up daily to kneel, touch, kiss, pray, weep, plead—or all of the above.
The wow factor strikes different spiritual personalities in different keys. Some are overwhelmed with gratitude for the incarnational opportunities under one centuries-old roof. We can touch what we believe here. Some find themselves unexpectedly in tears, borne up with religious fervor, or captured by the sheer fascination of this truly gothic cacophony of religious expression. Others are intellectually or aesthetically offended, expressing disbelief or derision at the bread-and-circuses pieties on display all around. I’ve not met anyone yet who’s neutral about the place.
The religious artifacts assembled in this mammoth centuries-old structure, with its radiating chapels of devotion and contemplation, are a museum of the marvelous, magnificent, monstrous, and everything in between. Personally, it was love at first sight for me and after 25 years I still can’t get enough of the place. A funny aside: Last night I met a friar there from my town in Rhode Island. Eight years ago he visited the church as a lay tourist, saw the place, was captured by it, became a friar, and stayed on as part of the Franciscan custodians of the church. And seriously, that makes perfect sense to me.
You can walk the ancient worn stairs to the Calvary chapel upstairs. Or stay below and touch the anointing stone that commemorates the spot where the body of Jesus was prepared for burial. A subterranean cistern purports to be the place where St. Helena, Constantine’s pious mother, discovered the True Cross. A legend even floats around about Joseph of Arimathea’s tomb being located in an obscure back chamber. But it’s the Holy Sepulchre itself, the dark hulking church-within-a-church commemorating the empty tomb of Easter, that dominates the space and the imagination. What can I say? It compels.
The Church of the Holy Sepulchre is locked nightly at 7 with an elaborate ceremony, and at that time you’re either in or out for the night. As many as 50 people on a given night, not counting guardians and custodial workers, elect to be locked in each night. Four of our 13 pilgrims felt personally addressed to be among that number on Thursday night.
To read more of Alice’s blog posts from the Holy Land, click here.
Images: Photos by Alice Camille