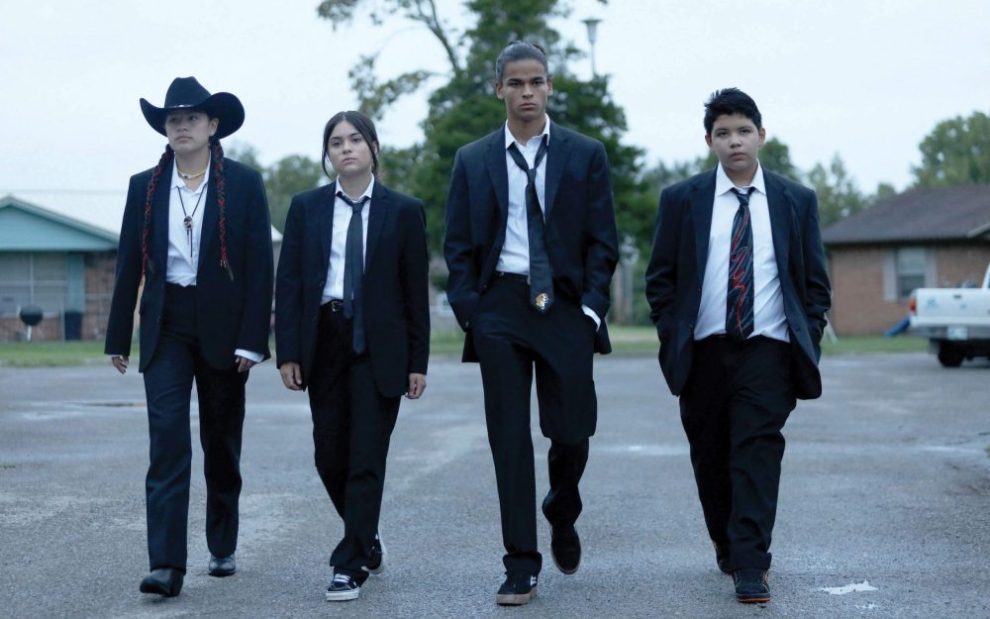 In the very first episode of the Hulu/FX dramedy series Reservation Dogs, four teenaged Native Americans gather to mark the first anniversary of their friend’s death. They’ve concocted a makeshift shrine and arrive in black suits with white shirts and skinny black ties to emulate the characters in Quentin Tarantino’s Reservoir Dogs. They stand before the shrine, burn sacred herbs in a traditional smudge pot, and conduct a ritual of spreading the smoke over themselves and the shrine.

That moment plumbs the depths of what the show’s creator, Sterlin Harjo, is doing in Reservation Dogs, which launched its second season in August. These kids—so full of typical adolescent bluff and bravado, so glued to their cell phones, so saturated in U.S. pop culture—still know how to remember the dead in a traditional ritual. That has become a powerful theme throughout the two seasons. Indigenous people are here. They are part of us. They don’t live in tepees or longhouses. They live in subdivisions. They may eat at a Sonic Drive-In or local fried catfish café, but they also keep traditions, honor their ancestors, pass on legends, take responsibility for one another, and laugh a lot.

Harjo himself is Seminole with Muscogee Creek ancestry. He was born and raised in Oklahoma, the territory to which the Indigenous nations of what is now the U.S. Southeast were forced when President Andrew Jackson signed the Indian Removal Act in 1830. Harjo went to college in Oklahoma and never left the state. His three indie feature films, plus a documentary, are all set in Oklahoma and were filmed there, as is Reservation Dogs. But that’s just the beginning of the attention to authenticity that gives the series such deep resonance. The producers, directors, writers, cast, and crew are all Indigenous people.

Without giving away too much plot, it’s safe to say that the first season is driven by all the factors that could make the teenaged protagonists want to escape their community, while the second is more about the ways Native people help one another make a life there. The subdivision where most of the characters live has a spray-painted sign that dubs it “The Village.”

While only one of the four young people at the center of the series has a two-parent family, as we follow them on their coming-of-age journeys, we meet the village that it takes to raise them—a rich assortment of aunts, uncles, and grandparents, some blood relatives, most not. The kids also get some help from a comical spirit guide—a feathered and bespangled Hollywood Indian on horseback, who claims to have died at the Battle of Little Bighorn.

It’s been a long road for Indigenous people to reach the point where they are able to tell their own story on such a major entertainment platform. Native people have been prominent in American pop culture since at least the late 1800s, but for the first 100 years they were most often depicted as villainous savages or docile helpers of white men, in the mold of the Pilgrim’s Squanto and the Lone Ranger’s Tonto. Late in the last century, we saw guilty white liberal versions of the Native story (for example, Little Big Man, Dances With Wolves, etc.). However, even in these well-meaning productions a white man is the hero and Native people are supporting players in their own dramas.

Only in the past 25 years, since the success of the movie Smoke Signals (which was produced, written, directed, and acted by Native people), have Indigenous artists been able to tell their own story on their own terms. Reservation Dogs matter-of-factly takes that as its starting point and shows us the day-to-day lives of people who are still adapting centuries-old traditions to a strange, often hostile, set of surroundings.

Let’s start with the Oklahoma location. The Native people in the show revere their place on Earth and are loath to leave it. But, of course, it is not their real homeland, and they haven’t forgotten it. One character actually has a blowup of President Jackson’s $20 bill portrait hanging on a wall to use as a knife-throwing target.

Still, in season two, these characters are somewhere in eastern Oklahoma, standing by a river and conducting a half-remembered ritual to counteract a bad luck curse. After improvised prayers to the Creator, the character leading the ritual says, “Now we sing a song. . . . An old one.” But what old song? No one really remembers. The leader hems and haws, then finally breaks into an off-key rendition of Tom Petty’s “Free Fallin’.” These Native Americans are totally Native but also inescapably American.

In his pilgrimage to Canada earlier this year, Pope Francis offered an apology for the church’s role in crimes against the Indigenous people of North America. He said, “When the European colonists first arrived here, there was a great opportunity to bring about a fruitful encounter between cultures, traditions and forms of spirituality. Yet for the most part that did not happen.”

History may judge that the Europeans were the greatest losers from that failed encounter. Native people aren’t what they were in 1491, but, as Reservation Dogs shows us, they are still very much their own Indigenous selves. People who had the entire might of the Western world—cultural, political, and military—turned against them have survived with many of the essentials of their communal life intact and a sly sense of humor about the whole sad and beautiful saga.

Image: Courtesy of FX on Hulu